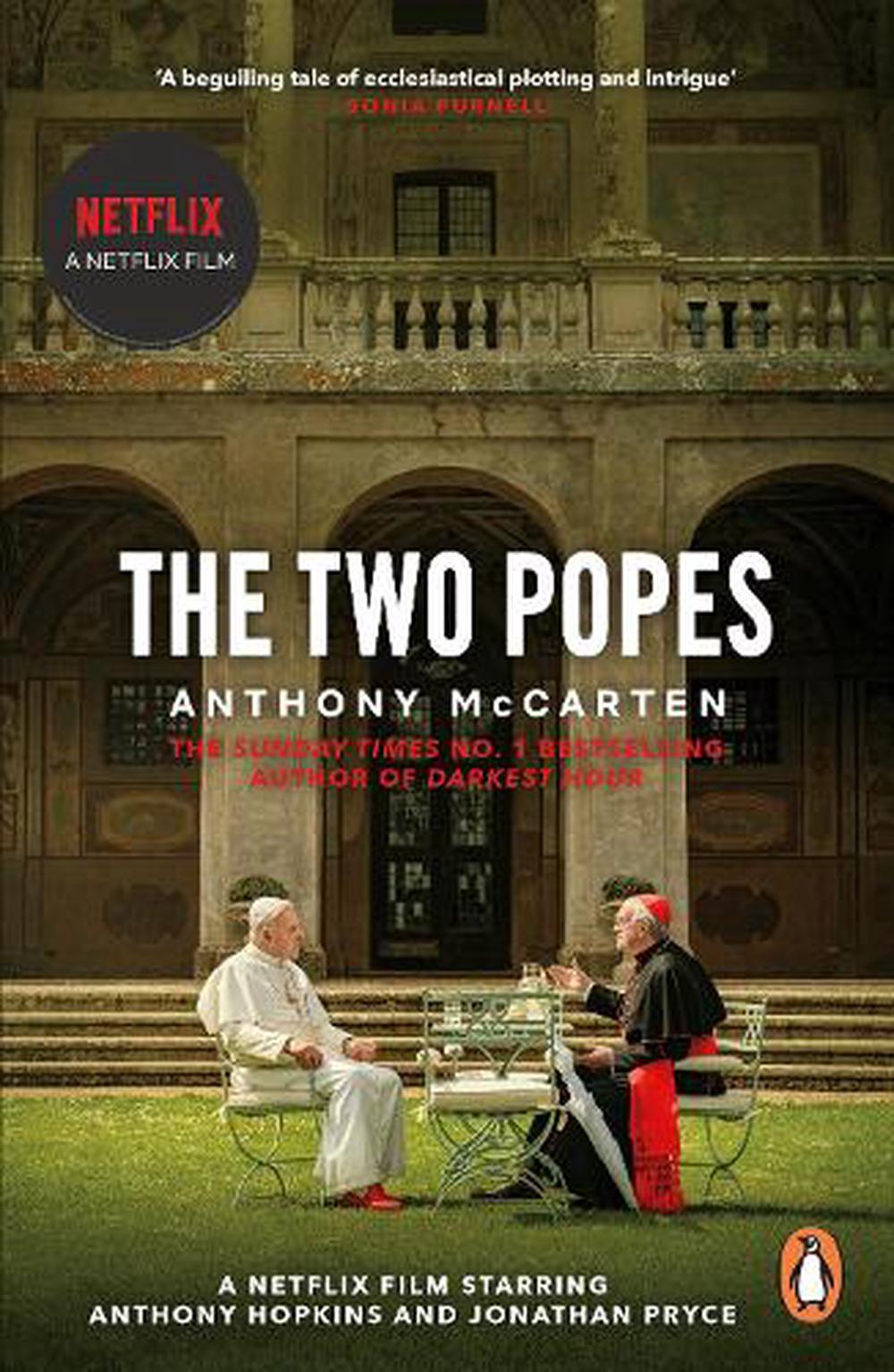 On 28 February 2013, a 600-year-old tradition was shattered- Pope Benedict XVI made a startling announcement. He would resign.

This story begins with the death of John Paul, through Benedict's election and reign - taking in the controversies that blighted the world's largest church - to his subsequent and shocking resignation. We see white smoke from the Sistine Chapel and a reluctant successor who breaks with tradition at once, declaring, I am a sinner. This is the most accurate definition. It is not a figure of speech, a literary genre. I am a sinner. Francis returns inside, invites the cardinals to join him, and serves them ice-cream.

From the prize-winning screenwriter of The Theory of Everything and Darkest Hour, The Pope is a poignant and often funny tale of an odd couple, of two very different men whose destinies converge and profoundly influence each other. What issues occupy the two men as they walk and talk in the Vatican gardens together, or later, when they share a light dinner, accompanied by Benedict's favorite drink, Fanta? This is both a biography of two popes and a story of the grace and extra wisdom that comes if a sinner can put their sins behind them.

Anthony McCarten is a BAFTA-winning writer who divides his time between London, Los Angeles and Munich. His screenplay for The Theory of Everything which he wrote and produced won a BAFTA and was nominated for an Oscar. His previous book, Darkest Hour, was a Sunday Times top ten bestseller.

[On the film] Oh my word. I just loved #thetwopopes. Such a mesmerising film. And so delighted they didn't traduce Benedict. The chemistry between him and Francis was so moving. It's on Netflix now. And it is definitely worth watching -- Giles Fraser This engrossing double biography of the chalk-and-cheese pontiffs Francis (the "slum bishop") and Benedict ("God's rottweiler") is full of drama, dark secrets and Vatican skulduggery. The Times Anthony McCarten . . . after The Theory of Everything, Darkest Hour and Bohemian Rhapsody, has rather cornered the market in glossy biographical dramas Guardian [On the film screenplay] If I like the script, that's the reason I'm doing it -- Jonathan Pryce [On the film] Essentially a papal buddy movie, a mesmerising two-hander, and one of the finest films of either performer's career -- Kevin Maher The Times [On the film screenplay] Jonathan Pryce and Anthony Hopkins deliver a sit-back-and-marvel double-act masterclass that will be spoken of in the same breath as De Niro and Pacino in Heat . . . the triple-whammy impact of McCarten's script, Meirelles's direction and, mostly, the two lead performances creates a completely credible reality, at times indecently moving . . . there are big ideas in here too * The Times, **** [On the play version] Why did he do it? Why did Pope Benedict XVI, that most traditional of pontiffs, break with tradition and resign in 2013, ceding the way to his reformist rival, Cardinal Bergoglio? That's the problem at the heart of this compelling new problem play by Anthony McCarten - and, sensibly, the playwright leaves it more or less unsolved. He presents us with two contrasting and eternal characters, both at breaking point: the wavering conservative and the reluctant liberal. The playwright's own sympathies seem to be with Bergoglio, yet, despite the relatable ordinariness Nicholas Woodeson brings to that role, it is Anton Lesser's shy, candyfloss-haired Benedict who, against the odds, emerges as the more fascinating presence: the one who can play Mozart, however imperfectly, the one who attempts little jokes, far less polished than his rival's hail-fellow shtick, yet more amusing for their faults. McCarten, who wrote the screenplay for Darkest Hour, has a gift for creating intimate dramas from public biographical property. Here the theatre becomes a confessional, with the audience asked to grant absolution to two flawed but pious priests. The Times, ???? Anthony McCarten has an astonishing knack of transforming a familiar story into a new tale, and one that is revealing and sometimes challenging. Now he has done so once again with The Pope, a beguiling tale of ecclesiastical plotting and intrigue that resembles a sort of bloodless Borgias. It may be a book about how two men reached the holiest pinnacle of the Roman Catholic Church, but when the clouds of incense clear we are left with an awful lot of sinning. The papacy is supposed to be infallible, but thanks to McCarten's deft lifting of the Vatican's scarlet curtains what we see is the breeding ground for one of the greatest scandals of our times in which conspiracy and vanity are on display to a terrifying extent Provides a compelling look at life and politics in the Vatican today Vanity Fair, This Winter's Best Nonfiction Reads I learned things from the script I didn't know. I just thought, "Can that be right? Were we that perilously close?" And so it just grabbed me. A cracking read . . . With due respect to those talented thesps, they will have to go some to convey all the nuances and contradictions, ambiguities and embarrassments, dark secrets and outright skulduggeries that McCarten crams into his 200-odd pages . . . engrossing -- Richard Morrison The Times