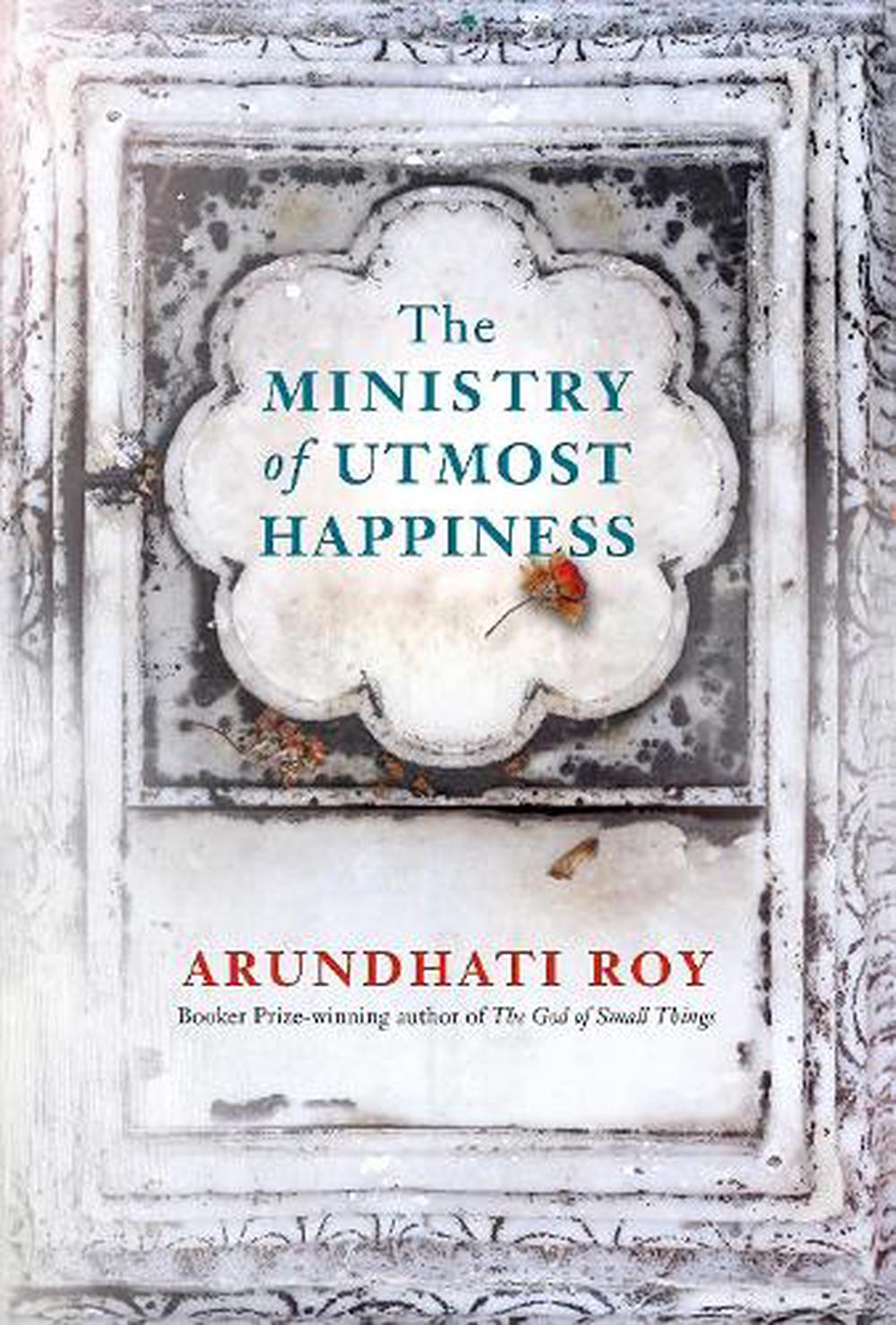 In a city graveyard, a resident unrolls a threadbare Persian carpet between two graves. On a concrete sidewalk, a baby appears quite suddenly, a little after midnight, in a crib of litter. In a snowy valley, a father writes to his five-year-old daughter about the number of people that attended her funeral. And in the Jannat Guest House, two people who've known each other all their lives sleep with their arms wrapped around one another as though they have only just met.

Here is a cast of unforgettable characters caught up in the tide of history. Told with a whisper, with a shout, with tears and with laughter, it is a love story and a provocation. Its heroes, present and departed, human and animal, have been broken by the world we live in and then mended by love -- and for this reason, they will never surrender.

The Ministry of Utmost Happiness takes us on a journey of many years-the story spooling outwards from the cramped neighbourhoods of Old Delhi into the burgeoning new metropolis and beyond, to the Valley of Kashmir and the forests of Central India, where war is peace and peace is war, and where, from time to time, 'normalcy' is declared. Anjum, who used to be Aftab, unrolls a threadbare carpet in a city graveyard that she calls home. A baby appears quite suddenly on a pavement, a little after midnight, in a crib of litter. The enigmatic S. Tilottama is as much of a presence as she is an absence in the lives of the three men who loved her. The Ministry of Utmost Happiness is at once an aching love story and a decisive remonstration. It is told in a whisper, in a shout, through tears and sometimes with a laugh. Its heroes are people who have been broken by the world they live in and then rescued, mended by love-and by hope. For this reason, they are as steely as they are fragile, and they never surrender. This ravishing, magnificent book reinvents what a novel can do and can be. And it demonstrates on every page the miracle of Arundhati Roy's storytelling gifts.

Arundhati Roy is the author of the Booker Prize-winning novel The God of Small Things. Her political writings include The Algebra of Infinite Justice, Listening to Grasshoppers, Broken Republic and Capitalism- A Ghost Story, and most recently Things That Can and Cannot Be Said, co-authored with John Cusack. Arundhati Roy lives in New Delhi and her new novel, The Ministry of Utmost Happiness will be published by Hamish Hamilton in June 2017.

The first novel in 20 years from the Booker-prize winning author of The God of Small Things Penguin A sprawling, kaleidoscopic fable about love and resistance in modern India The Guardian A kaleidoscopic story about the struggle for Kashmir's independence Washington Post Fantastic. The novel is unflinchingly critical of power, and yet she empowers her underdog characters to persevere, leaving readers with a few droplets of much-needed hope. It's heartening when writers live up to the hyperbole that surrounds them Hirsh Sawhney Arguably the biggest publishing event of the year Financial Times This intimate epic about India over the past two decades is superb: political but never preachy; heartfelt yet ironic; precisely poetic Daily Telegraph A beautiful and grotesque portrait of modern India and the world beyond. Take your time over it, just as the author did Good Housekeeping Teems with human drama, contains a vivid cast of characters and offers an evocative, searing portrait of modern India Tatler Heartfelt, poetic, intimate, laced with ironic humour...The intensity of Roy's writing - the sheer amount she cares about these people - compels you to concentrate...This is the novel one hoped Arundhati Roy would write about India Daily Telegraph The Ministry of Utmost Happiness confirms Roy's status as a writer of delicate human dramas that also touch on some of the largest questions of the day. It is the novel as intimate epic. Expect to see it on every prize shortlist this year The Times A masterpiece. Roy joins Dickens, Naipaul, Garcia Marquez, and Rushdie in her abiding compassion, storytelling magic, and piquant wit. A tale of suffering, sacrifice and transcendence-an entrancing, imaginative, and wrenching epic -- Donna Seaman Booklist (starred review) Ambitious, original, and haunting. A novel [that] fuses tenderness and brutality, mythic resonance and the stuff of headlines . . .essential to Roy's vision of a bewilderingly beautiful, contradictory, and broken world Publishers Weekly (starred review) An author worth waiting two decades for Financial Times A humane, engaged near-fairy tale that soon turns dark - full of characters and their meetings, accidental and orchestrated alike to find, yes, that utmost happiness of which the title speaks Kirkus (starred review) A great tempest of a novel... which will leave you awed by the heat of its anger and the depth of its compassion Washington Post Roy's second novel proves as remarkable as her first Financial Times She is back with a heavyweight state-of-the-nation story that has been ten years in the making Daily Mail

A new novel from the Booker Prize-winning author of the monumental God of Small Things.