No Friend But the Mountains

(15 reviews)
PUBLISHED: 31st July 2018
ISBN: 9781760555382
ANNOTATION:
An account of life inside Manus detention centre, from journalist and asylum-seeker Behrouz Boochani. 'Our government jailed his body, but his soul remained that of a free man.' RICHARD FLANAGAN 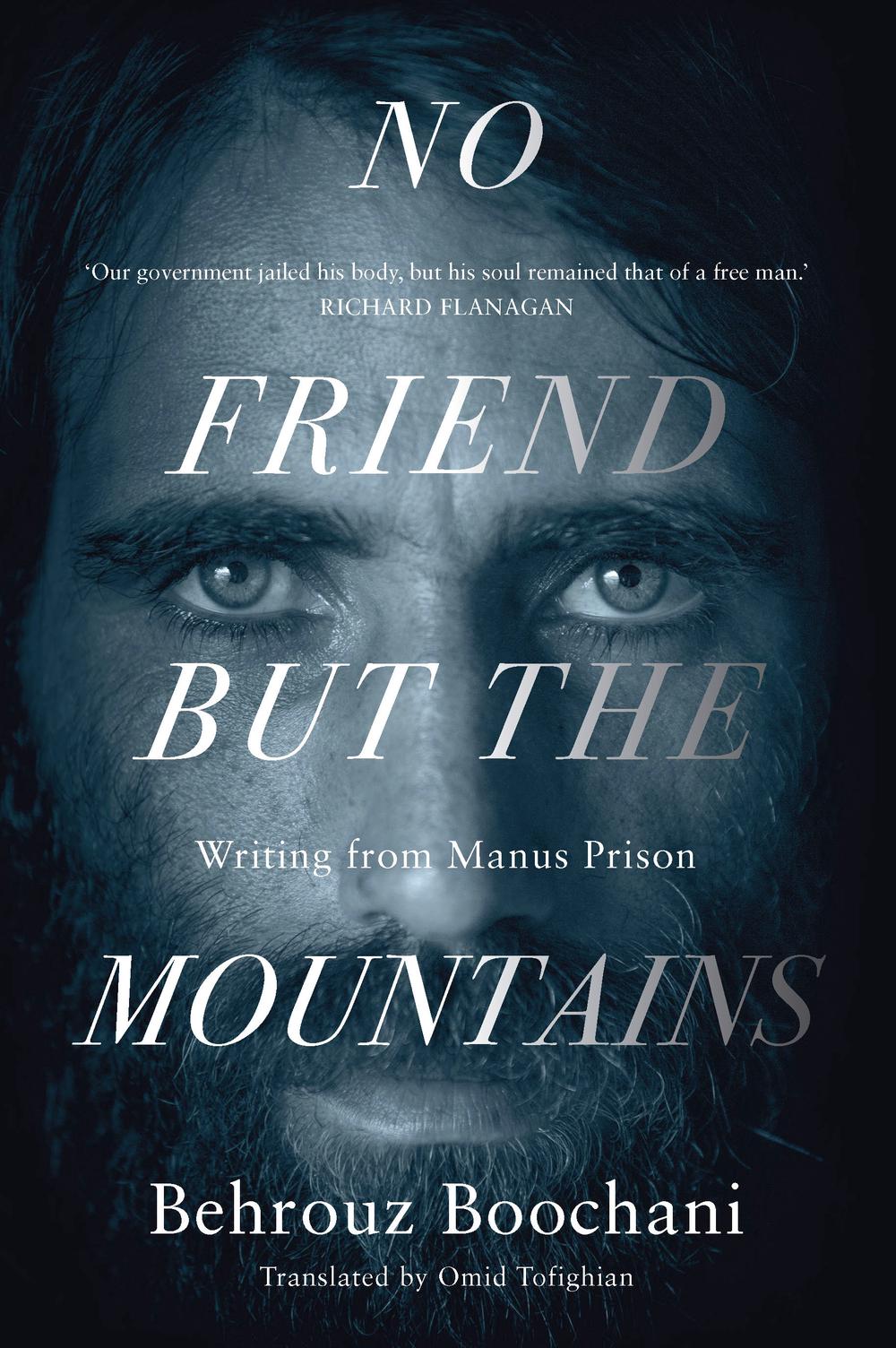 OTHER FORMATS:
PUBLISHED: 31st July 2018
ISBN: 9781760555382
ANNOTATION:
An account of life inside Manus detention centre, from journalist and asylum-seeker Behrouz Boochani. 'Our government jailed his body, but his soul remained that of a free man.' RICHARD FLANAGAN

An account of life inside Manus detention centre, from journalist and asylum-seeker Behrouz Boochani. 'Our government jailed his body, but his soul remained that of a free man.' RICHARD FLANAGAN

People would run to the mountains to escape the warplanes and found asylum within their chestnut forests...

This book is the result. Laboriously tapped out on a mobile phone and translated from the Farsi. It is a voice of witness, an act of survival. A lyric first-hand account. A cry of resistance. A vivid portrait through six years of incarceration and exile.

Do Kurds have any friends other than the mountains?

PRAISE FOR NO FRIEND BUT THE MOUNTAINS

'Our government jailed his body, but his soul remained that of a free man.' RICHARD FLANAGAN

'The most important Australian book published in 2018.' ROBERT MANNE

'A powerful account ... made me feel ashamed and outraged. Behrouz's writing is lyrical and poetic, though the horrors he describes are unspeakable' SOFIE LAGUNA

'A poetic, yet harrowing read, and every Australian household should have a copy.' MAXINE BENEBA CLARKE

'A chant, a cry from the heart, a lament, fuelled by a fierce urgency, written with the lyricism of a poet, the literary skills of a novelist, and the profound insights of an astute observer of human behaviour and the ruthless politics of a cruel and unjust imprisonment.' Arnold Zable, author of the award-winning Jewels and Ashes and Cafe Scheherazade

'A magnificent writer. To understand the true nature of what it is that we have done, every Australian, beginning with the prime minister, should read Behrouz Boochani's intense, lyrical and psychologically perceptive prose-poetry masterpiece.' The Age

'He immerses the reader in Manus' everyday horrors: the boredom, frustration, violence, obsession and hunger; the petty bureaucratic bullying and the wholesale nastiness; the tragedies and the soul-destroying hopelessness. Its creation was an almost unimaginable task... will lodge deep in the brain of anyone who reads it.' Herald Sun

'Boochani has defied and defeated the best efforts of Australian governments to deny asylum seekers a face and a voice. And what a voice: poetic yet unsentimental, acerbic yet compassionate, sorrowful but never self-indulgent, reflective and considered even in anger and despair. ... It may well stand as one of the most important books published in Australia in two decades, the period of time during which our refugee policies have hardened into shape - and hardened our hearts in the process.' SATURDAY PAPER

'In the absence of images, turn to this book to fathom what we have done, what we continue to do. It is, put simply, the most extraordinary and important book I have ever read.' Good Reading Magazine (starred review)

"Not for the faint-hearted, it's a powerful, devastating insight into a situation that's so often seen through a political - not personal - lens." GQ Australia

"Behrouz Boochani has written a book which is as powerful as it is poetic and moving. He describes his experience of living in a refugee prison with profound insight and intelligence." Queensland Reviewers Collective

"In his book Boochani introduces us to different dimensions of his experience and thinking. Both a profound creative writing project and a strategic act of resistance, the book is part of a coherent theoretical project and critical approach." Omid Tofighian, translator of No Friend But the Mountains

"It is a voice of witness, an act of survival. A lyric first-hand account. A cry of resistance. A vivid portrait through five years of incarceration and exile." Readings

"Boochani has woven his own experiences in to a tale which is at once beautiful and harrowing, creating a valuable contribution to Australia's literary canon." Writing NSW

Associate Professor Behrouz Boochani graduated from Tarbiat Moallem University and Tarbiat Modares University, both in Tehran; he holds a Masters degree in political science, political geography and geopolitics. He is a Kurdish-Iranian writer, journalist, scholar, cultural advocate and filmmaker. From 2013 to 2017 he was a political prisoner incarcerated by the Australian government in the Manus Island Regional Processing Centre (Papua New Guinea). Since being forcibly transferred in 2017 he continued to be incarcerated in one of three new prisons (East Lorengau Refugee Transit Centre). Boochani was writer for the Kurdish language magazine Werya; is Adjunct Associate Professor in Social Sciences at UNSW; non-resident Visiting Scholar at the Sydney Asia Pacific Migration Centre (SAPMiC), University of Sydney; Honorary Member of PEN International; and winner of an Amnesty International Australia 2017 Media Award, the Diaspora Symposium Social Justice Award, the Liberty Victoria 2018 Empty Chair Award, and the Anna Politkovskaya award for journalism. He publishes regularly with The Guardian, and his writing also features in The Saturday Paper, Huffington Post, New Matilda, The Financial Times and The Sydney Morning Herald. Boochani is also co-director (with Arash Kamali Sarvestani) of the 2017 feature-length film Chauka, Please Tell Us The Time; collaborator on Nazanin Sahamizadeh's play Manus; associate producer for Hoda Afshar's video installation Remain (2018) and the accompanying photography portrait series; and author of No Friend but the Mountains: Writing From Manus Prison (Picador 2018). At the Victorian Premier's Literary Awards 2019 his book won the Victorian Prize for Literature in addition to the Non-Fiction category. He has also won the Special Award at the 2019 NSW Premier's Literary Awards; Non-Fiction Book of the Year, Australian Book Industry Awards; and the National Biography Prize.

Dr Omid Tofighian is an award-winning lecturer, researcher and community advocate, combining philosophy with interests in citizen media, popular culture, displacement and discrimination. He completed his PhD in philosophy at Leiden University, Netherlands, and graduated with a combined honours degree in philosophy and studies in religion at the University of Sydney. Tofighian has lived variously in Australia where he taught at different universities; the United Arab Emirates where he taught at Abu Dhabi University; Belgium where he was a visiting scholar at K.U. Leuven; Netherlands for his PhD; and intermittent periods in Iran for research. His current roles include Assistant Professor of English and Comparative Literature, American University in Cairo; Adjunct Lecturer in the School of the Arts and Media, UNSW; Honorary Research Associate for the Department of Philosophy, University of Sydney; faculty at Iran Academia; and campaign manager for Why Is My Curriculum White? - Australasia. He contributes to community arts and cultural projects and works with refugees, migrants and youth. He has published numerous book chapters and journal articles, is author of Myth and Philosophy in Platonic Dialogues (Palgrave 2016), translator of Behrouz Boochani's multi-award winning book No Friend but the Mountains: Writing From Manus Prison (Picador 2018), and co-editor of 'Refugee Filmmaking', Alphaville: Journal of Film and Screen Media (Winter 2019).

An account of life inside Manus detention centre, from journalist and asylum-seeker Behrouz Boochani. 'Our government jailed his body, but his soul remained that of a free man.' RICHARD FLANAGAN

This is wonderful and very important book that will become a classic of Australian literature. Apart from the grim story it tells of life incarcerated on Manus Island, it is written in both and academic and poetic literary style, that holds a mirror to the heartlessness of Australian govt detention & border protection policies of the current time.
By Kim
I am loving the book but it is a confronting and quite difficult read. Absolutely wonderfully written but I found the translators language in his notes far too wordy and "over the top" for an ordinary person to understand.
By Patricia
I loved the astute character studies, the subtle exposition of; the terror of escaping a treacherous homeland, then, after you've survived that terror, being thrown into a living nightmare in Manus prison. I was was beguiled by the beautiful poetry in this sad book.
The suffering of the innocent prisoners settles gently upon one until you realise the enormity of the crime perpetrated against the prisoners; then you are speared by their pain.
By Felicia
Should've been out there LONG ago!
By Gladys
A fantastic read - beautifully written prose and poetry, telling a heart-breaking tale as well as interesting analysis of the structure of the Australian system of offshore detention.
By Melanie
An amazing work of art, such a good read and incredible insight into life for offshore detainees. The system Boochani describes of systematic torture is not a part of Australian political culture that we can feel proud of.
By Jeni
Great stuff!
By Dom
It's a remarkable book. It casts light on the terrible conditions in which refugees (who come to Australia by boat) are kept
By Madeleine
By Margaret
An amazing insight into the life of Behrouz and what life is like on Manus for people seeking asylum. If you want to know more about what the Australian Government is doing in offshore processing - READ THIS BOOK. Your heart will be shaken.
By Kate
Beautifully written and moving
By Karen
By William
An excellent but disturbing read. No person should be treated this way.
By Helen
By Sophie
Very thought provoking
By Dalkeith