PUBLISHED: 27th February 2013
ISBN: 9781409364450
ANNOTATION:
Learning about the vast concept of politics can be daunting, this book makes it easier than ever by giving you all the big ideas, simply explained. It includes more than 100 ideas in the history of politics that are helpfully broken down so that abstract topics, such as theoretical foundations and practical applications become real. 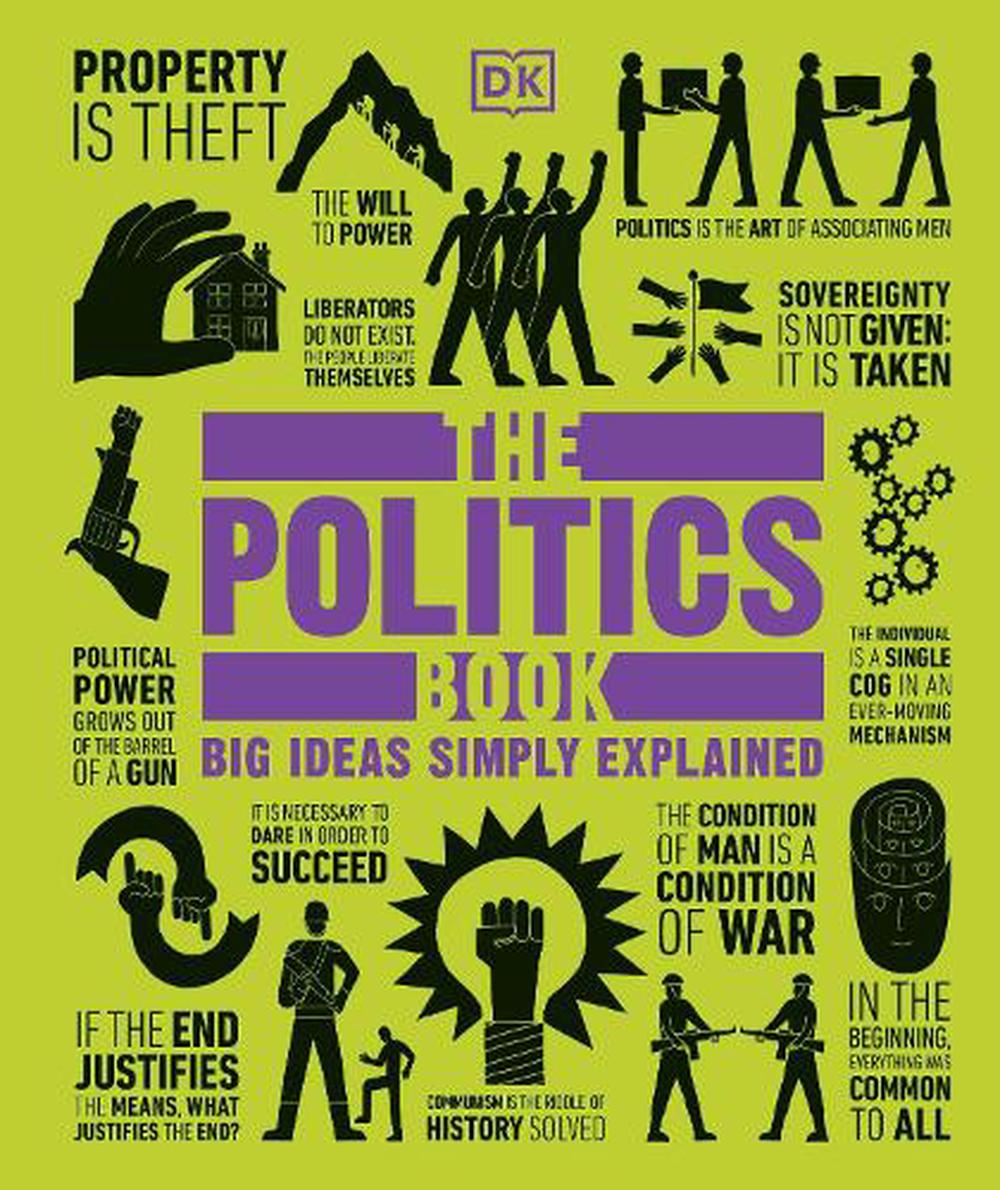 OTHER FORMATS:
PUBLISHED: 27th February 2013
ISBN: 9781409364450
ANNOTATION:
Learning about the vast concept of politics can be daunting, this book makes it easier than ever by giving you all the big ideas, simply explained. It includes more than 100 ideas in the history of politics that are helpfully broken down so that abstract topics, such as theoretical foundations and practical applications become real.

Learning about the vast concept of politics can be daunting, this book makes it easier than ever by giving you all the big ideas, simply explained. It includes more than 100 ideas in the history of politics that are helpfully broken down so that abstract topics, such as theoretical foundations and practical applications become real.

This invaluable, easy-to-understand guide to world politics and government offers an accessible introduction to more than 80 of the most important theories and big ideas of leaders and politicians throughout history.

The Politics Book makes government and politics easy to understand by explaining the big ideas simply, using clear language supported by eye-catching graphics. The key events in political history are outlined from the origins of political thinking by Confucius and Aristotle to modern-day activists such as Martin Luther King and Nelson Mandela. Helpful mind maps break down their important concepts into bitesize chunks to make the subject accessible to students of politics and anyone with an interest in how government works. A handy reference section also provides a glossary of key terms and a directory of significant political figures.

Filled with thought-provoking quotes from great political thinkers such as Nietzsche, Malcolm X, Karl Marx, and Mao Zedong, The Politics Book gives context to the world of government and power.

1: If your desire is for good, the people will be good, Confucius 2: The art of war is of vital importance to the state, Sun Tzu 3: Plans for the country are only to be shared with the learned, Mozi 4: Until philosophers are kings, cities will never have rest from their evils, Plato 5: Man is by nature a political animal, Aristotle 6: A single wheel does not move, Chanakya 7: If evil ministers enjoy safety and profit, this is the beginning of downfall, Han Fei Tzu 8: The government is bandied about like a ball, Cicero

1: If justice be taken away, what are governments but great bands of robbers? Augustine of Hippo 2: Fighting has been enjoined upon you while it is hateful to you, Muhammed 3: The people refuse the rule of virtuous men, Al-Farabi 4: No free man shall be imprisoned, except by the law of the land, Barons of King John 5: For war to be just, there is required a just cause, Thomas Aquinas 6: To live politically means living in accordance with good laws, Giles of Rome 7: The Church should devote itself to imitating Christ and give up its secular power, Marsilius of Padua 8: Government prevents injustice, other than such as it commits itself, Ibn Khaldun 9: A prudent ruler cannot, and must not, honour his word, Niccolo Machiavelli

1: In the beginning, everything was common to all, Francisco de Vitoria 2: Sovereignty is the absolute and perpetual power of a commonwealth, Jean Bodin 3: The natural law is the foundation of human law, Francisco Suarez 4: Politics is the art of associating men, Johannes Althusius 5: Liberty is the power that we have over ourselves, Hugo Grotius 6: The condition of man is a condition of war, Thomas Hobbes 7: The end of law is to preserve and enlarge freedom, John Locke 8: When legislative and executive powers are united in the same body, there can be no liberty, Montesquieu 9: Independent entrepreneurs make good citizens, Benjamin Franklin

1: To renounce liberty is to renounce being a man, Jean-Jacques Rousseau 2: No generally valid principle of legislation can be based on happiness, Immanuel Kant 3: The passions of individuals should be subjected, Edmund Burke
4: Rights dependent on property are the most precarious, Thomas Paine 5: All men are created equal, Thomas Jefferson 6: Each nationality contains its centre of happiness within itself, Johann Gottfried Herder 7: Government has but a choice of evils, Jeremy Bentham 8: The people have a right to keep and bear arms, James Madison 9: The most respectable women are the most oppressed, Mary Wollstonecraft 10: The slave feels self-existence to be something external, Georg Hegel 11: War is the continuation of Politik by other means, Carl von Clausewitz 12: An educated and wise government recognizes the developmental needs of its society, Jose Maria Luis Mora 13: A state too extensive in itself ultimately falls into decay, Simon Bolivar 14: Abolition and the Union cannot co-exist, John C. Calhoun 15: The tendency to attack "the family" is a symptom of social chaos, Auguste Comte

1: Socialism is a new system of serfdom, Alexis de Tocqueville 2: Say not I, but we, Giuseppe Mazzini 3: That so few dare to be eccentric marks the chief danger of the time, John Stuart Mill 4: No man is good enough to govern another man, without that other's consent, Abraham Lincoln 5: Property is theft, Pierre-Joseph Proudhon 6: The privileged man is a man depraved in intellect and heart, Mikhail Bakunin 7: That government is best which governs not at all, Henry David Thoreau 8: Communism is the riddle of history solved, Karl Marx 9: The men who proclaimed the republic became the assassins of freedom, Alexander Herzen 10: We must look for a central axis for our nation, Ito Hirobumi 11: The will to power, Friedrich Nietzsche 12: It is the myth that is alone important, Georges Sorel 13: We have to take working men as they are, Eduard Bernstein 14: The disdain of our formidable neighbour is the greatest danger for Latin America, Jose Marti 15: It is necessary to dare in order to succeed, Peter Kropotkin 16: Either women are to be killed, or women are to have the vote, Emmeline Pankhurst 17: It is ridiculous to deny the existence of a Jewish nation, Theodor Herzl 18: Nothing will avail to save a nation whose workers have decayed, Beatrice Webb 19: Protective legislation in America is shamefully inadequate, Jane Addams 20: Land to the tillers! Sun Yat-Sen 21: The individual is a single cog in an ever-moving mechanism, Max Weber

1: Non-violence is the first article of my faith, Mahatma Gandhi 2: Politics begin where the masses are, Vladimir Lenin 3: The mass strike results from social conditions with historical inevitability, Rosa Luxemburg 4: An appeaser is one who feeds a crocodile hoping it will eat him last, Winston Churchill 5: The Fascist conception of the state is all-embracing, Giovanni Gentile 6: The wealthy farmers must be deprived of the sources of their existence, Joseph Stalin 7: If the end justifies the means, what justifies the end? Leon Trotsky 8: We will unite Mexicans by giving guarantees to the peasant and the businessman, Emiliano Zapata 8: War is a racket, Smedley D. Butler 9: Sovereignty is not given, it is taken, Mustafa Kemal Ataturk 10: Europe has been left without a moral code, Jose Ortega y Gasset 11: We are 400 million people asking for liberty, Marcus Garvey 12: India cannot really be free unless separated from the British empire, Manabendra Nath Roy 13: Sovereign is he who decides on the exception, Carl Schmitt 14: Communism is as bad as imperialism, Jomo Kenyatta 15: The state must be conceived of as an "educator", Antonio Gramsci 16: Political power grows out of the barrel of a gun, Mao Zedong

1: The chief evil is unlimited government, Friedrich Hayek 2: Parliamentary government and rationalist politics do not belong to the same system, Michael Oakeshott 3: The objective of the Islamic jihad is to eliminate the rule of an un-Islamic system, Abul Ala Maududi 4: There is nothing to take a man's freedom away from him, save other men, Ayn Rand 5: Every known and established fact can be denied, Hannah Arendt 6: What is a woman? Simone de Beauvoir 7: No natural object is solely a resource, Arne Naess 8: We are not anti-white, we are against white supremacy, Nelson Mandela 9: Only the weak-minded believe that politics is a place of collaboration, Gianfranco Miglio 10: During the initial stage of the struggle, the oppressed tend to become oppressors, Paulo Freire 11: Justice is the first virtue of social institutions, John Rawls 12: Colonialism is violence in its natural state, Frantz Fanon 13: The ballot or the bullet, Malcolm X 14: We need to "cut off the king's head", Michel Foucault 15: Liberators do not exist. The people liberate themselves, Che Guevara 16: Everybody has to make sure that the rich folk are happy, Noam Chomsky 17: Nothing in the world is more dangerous than sincere ignorance, Martin Luther King 18: Perestroika unites socialism with democracy, Mikhail Gorbachev 19: The intellectuals erroneously fought Islam, Ali Shariati 20: The hellishness of war drives us to break with every restraint, Michael Walzer 21: No state more extensive than the minimal state can be justified, Robert Nozick 22: No Islamic law says violate women's rights, Shirin Ebadi 23: Suicide terrorism is mainly a response to foreign occupation, Robert Pape