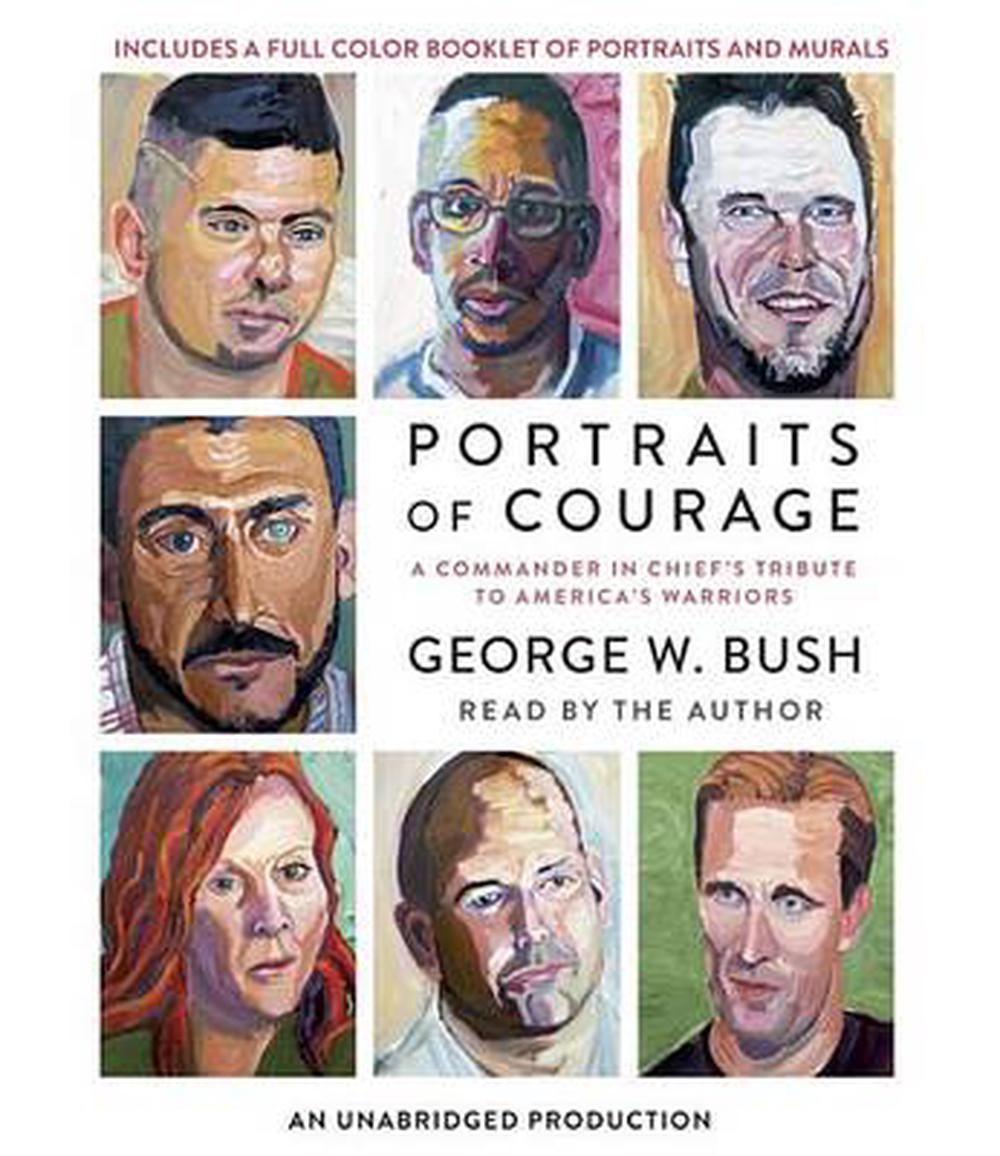 Includes a full color booklet of portraits and murals.--Cover

Growing out of President Bush's own outreach and the ongoing work of the George W. Bush Institute's Military Service Initiative, Portraits of Courage brings together sixty-six full-color portraits and a four-panel mural painted by President Bush of members of the United States military who have served our nation with honor since 9/11-and whom he has come to know personally. Our men and women in uniform have faced down enemies, liberated millions, and in doing so showed the true compassion of our nation. Often, they return home with injuries-both visible and invisible-that intensify the challenges of transitioning into civilian life. In addition to these burdens, research shows a civilian-military divide. Seventy-one percent of Americans say they have little understanding of the issues facing veterans, and veterans agree- eighty-four percent say that the public has "little awareness" of the issues facing them and their families.Each painting in this meticulously produced hardcover volume is accompanied by the inspiring story of the veteran depicted, written by the President. Readers can see the faces of those who answered the nation's call and learn from their bravery on the battlefield, their journeys to recovery, and the continued leadership and contributions they are making as civilians. It is President Bush's desire that these stories of courage and resilience will honor our men and women in uniform, highlight their family and caregivers who bear the burden of their sacrifice, and help Americans understand how we can support our veterans and empower them to succeed.

EORGE W. BUSH is the 43rd President of the United States, serving from 2001 to 2009. He previously served as Governor of Texas. He and his wife, Laura, now live in Dallas, where they founded the George W. Bush Presidential Center at Southern Methodist University. President Bush is also the author of two number one bestsellers- Decision Points, his presidential memoir; and 41, a biography of his father, President George H.W. Bush.

"[A] departure from anything anyone named Bush -- or any other President -- has published after leaving office . . . Accompanying the portraits are stories, also written by Bush, about how each subject dealt with setback and then mounted a recovery. The paths are anything but straightforward, and Bush's book, in words and pictures, is a challenge and a road map for anyone who faces difficulty." -TIME "What an uplifting volume. It's a testament to, for sure, the GIs it portrays - and, by implication, to all our soldiers, airmen, and sailors. It's also a tale of life's capacity to surprise, its ability to hand up new and unexpected lives not only to these veterans but also to their constitutional commander." -Seth Lipsky, New York Post

"Evocative and surprisingly adept . . . After staring at the haunting close-up portraits of wounded warriors and reading the searing accounts of their suffering, I'm beginning to understand why this beautifully published book went to No. 1 on The Times's nonfiction best-seller list." -Jonathan Alter, the New York Times Book Review

"Most of [the portraits] show the head and face full size, seemingly bursting out of the frame with genuine presence and considerable expressive energy . . . There is genuine empathy in Bush's embrace of the stories told by these soldiers . . . He demonstrates in this book and in these paintings virtues that are sadly lacking at the top of the American political pyramid today: curiosity, compassion, the commitment to learn something new and the humility to learn it in public." -Philip Kennicott, the Washington Post

"[It's] impossible to look at these 98 extraordinary images without thinking deeply about the artist who made them: A leader who sent troops off to the battlefield, and who, so many years later, spends his days channeling the damaged but determined warriors who came home . . . Spend a little time in the presence of these pictures, and one is overwhelmed by their subjects' sacrifices, their courage, their strength and, in some cases, their turmoil." -Task and Purpose

"[A] departure from anything anyone named Bush -- or any other President -- has published after leaving office . . . Accompanying the portraits are stories, also written by Bush, about how each subject dealt with setback and then mounted a recovery. The paths are anything but straightforward, and Bush's book, in words and pictures, is a challenge and a road map for anyone who faces difficulty."

A vibrant collection of oil paintings and stories by President George W. Bush honoring the sacrifice and courage of America's military veterans. With Forewords by former First Lady Laura Bush and General Peter Pace, 16th Chairman of the Joint Chiefs of Staff.