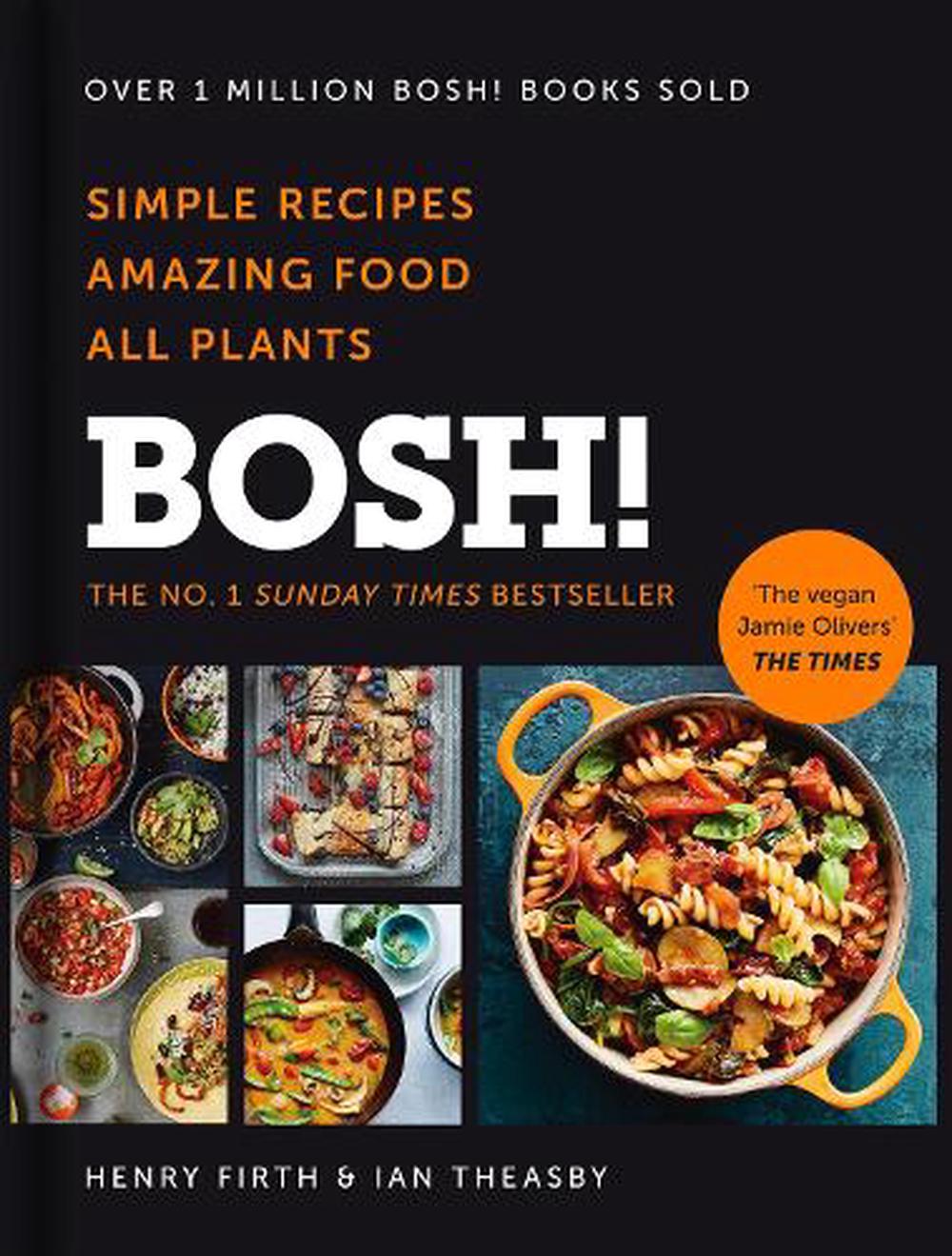 Want to cook ridiculously good plant-based food from scratch but have no idea where to start? With over 140 incredibly easy and outrageously tasty all plants meals, BOSH! The Cookbook will be your guide.

Henry Firth and Ian Theasby, creators of the world's biggest and fastest-growing plant-based platform, BOSH!, are the new faces of the food revolution.

Their online channels have over 2.3 million fans and constantly inspire people to cook ultra-tasty & super simple recipes at home. Always ensuring they stick to fresh, supermarket-friendly ingredients, BOSH! truly is "plant-based food for everyone".

The book is jam-packed with fun, unpretentious and mega satisfying recipes, including Creamy Mac and Greens, Burrito Samosas, the Big Bhaji Burger, the World's Best Pesto Lasagne, Satay Sweet Potato BOSH! Bowl, Spanish Beach Churros, Gooey PBJ Brownies and Salted Caramel Chocolate Crunch Tart, all easy enough to be rustled up any night of the week. It's enough to convince the staunchest of carnivores to give plants a whirl.

Whether you're already sold on the plant-based lifestyle or you simply want to incorporate more meat, dairy and egg-free meals into your week, BOSH! The Cookbook is your plant-based bible.

How can you eat amazing meals that are easy to cook and incredibly tasty, using only plants? BOSH! With over 140 of our best-loved recipes, you'll find your new family favourites, quick and scrumptious lunch ideas, showstoppers that'll impress even the most staunch steak-lover, tempting snacks, sumptuous puds and awesome cocktails, all bursting with flavour, and all without meat, eggs or dairy. So if you want to eat more plants and less meat, and still have comforting, satisfying yet exciting and delicious meals, this is exactly the book for you. x Henry and Ian

Lifelong friends from Sheffield, Henry and Ian are the guys behind BOSH! - the biggest plant-based video channel on Facebook. Totally powered by plants, BOSH! create mouthwatering meat- and dairy-free recipes that are shared across the globe, reaching over 26 million people a month.

"A really great cookbook with over 140 recipes to use every day." HAIRY BIKERS

"Ian Theasby and Henry Firth from "BOSH!" create simple and imaginative vegan recipes which are filmed and broadcast to over 1.4m Facebook users. Their videos are short, intoxicating, with no agenda or fuss - just showcasing delicious, comforting food that happens to be meat free." BBC Radio 4 "Thanks to [their] inspiring videos of easy-to-whip-up recipes, such as a vegan kebab and a guacamole potato salad, BOSH! has racked up almost 1.4m likes on Facebook." The Guardian

Simple recipes. Unbelievable results. All plants. The highest-selling vegan cookbook ever. As seen on ITV's 'Living on the Veg'

Simple recipes. Unbelievable results. All plants. The highest-selling vegan cookbook ever. As seen on ITV's 'Living on the Veg' The first ever mainstream vegan cookbook from the largest and fastest-growing plant-based online channel in the world School friends from Sheffield Ian and Henry launched BOSH! in summer 2016 after making the switch to plant-based eating. Now they attract 25,000+ new fans to their Facebook page every week, and get more views than Joe Wicks, Jamie Oliver or Deliciously Ella Pioneering a new way of thinking about food, one without animal products at the core, BOSH! creates the food you love, without the meat. This isn't just good vegan food. It's good food, full stop. Published to coincide with the explosion of the plant-based movement - vegan eating is set to be the megatrend of 2018 * Massive global broadcast media and national press campaign, aligned with William Morrow in the States, reaching the existing BOSH! fanbase and new readers alike: - 6-month pre-order campaign building excitement and anticipation among BOSH!'s fanbase of 1.4 million Facebook and 150K Instagram followers - Major ticketed launch event BOSHFest right in the heart of foodie London at the world-famous Borough Market - SigniFicant coverage across the national press, including newspapers, supplements and food and lifestyle magazines - Big sofa TV interviews on key daytime and breakfast slots - High-impact nationwide consumer advertising campaign running at train stations and LU - Vegan and vegetarian celebrities with massive social reach including Ellie Goulding, Russell Brand and Tom Fletcher approached for endorsements - Year-round appearances by Ian and Henry at major literary and food festivals nationwide - Working together with the PR team behind Joe Wicks, Megan Carver, and the biggest talent management agency in Europe, James Grant, to build BOSH!'s profile, drive strategic brand & media partnerships, and get coverage and exposure across TV, radio, print and online Competition: Lean in 15;Simple;30 minute meals;pinch of nom;weekend kitchen;veg;greenfeast;the roasting tin;how not to die;dirty vegan. joe wicks;ottolenghi;deliciously ella;Anna Jones;Jamie Oliver;nigel slater;tom kerridge;gaz oakley;thug kitchen;matt pritchard;katy beskow;michael greger;miguel barclay