PUBLISHED: 31st March 1993
ISBN: 9780140445701
ANNOTATION:
Asserts that - regardless of the efforts of individual capitalists, public authorities or even generous philanthropists - any market economy is inevitably doomed to endure a series of worsening, explosive crises leading finally to complete collapse. 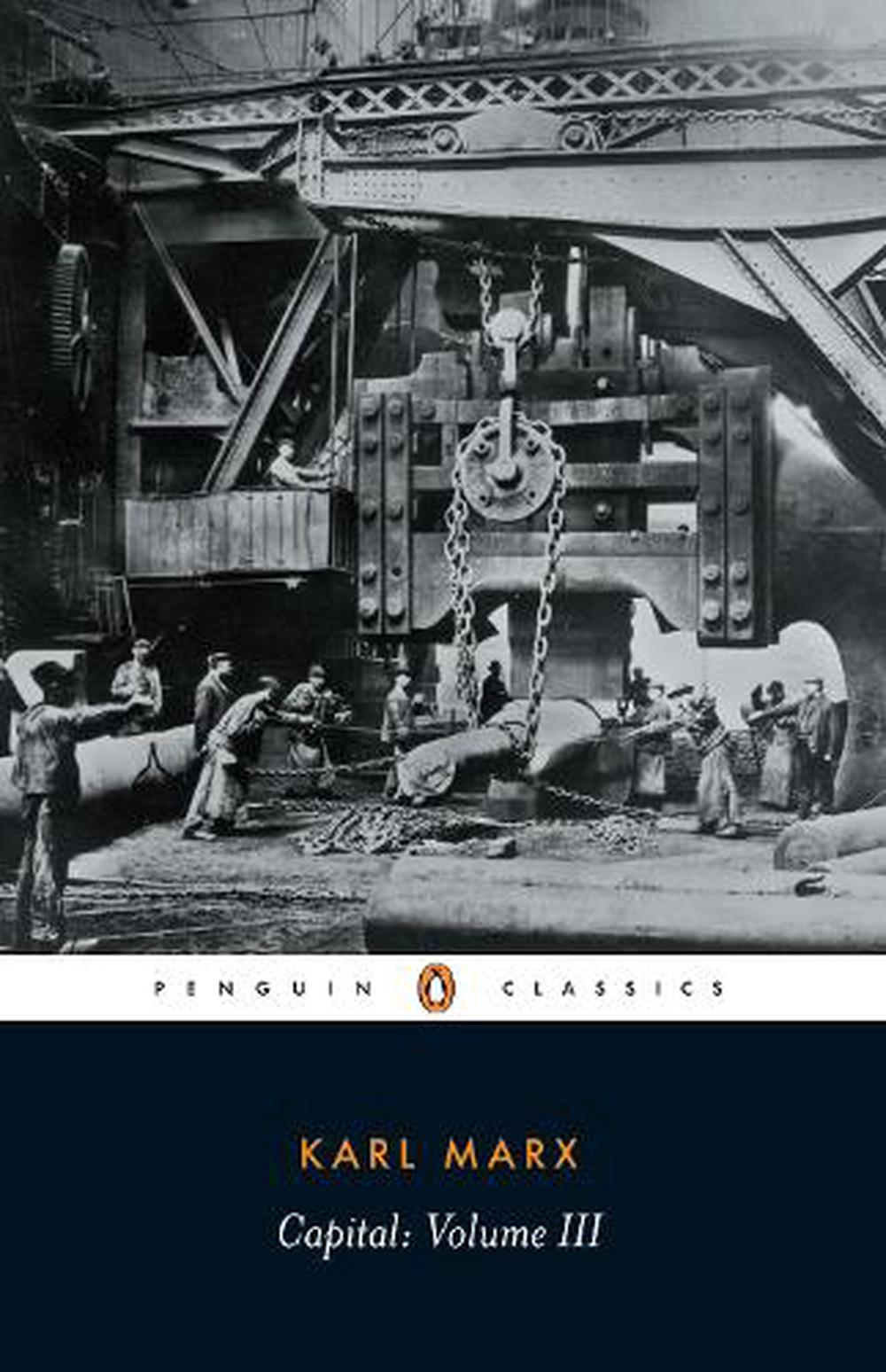 OTHER FORMATS:
PUBLISHED: 31st March 1993
ISBN: 9780140445701
ANNOTATION:
Asserts that - regardless of the efforts of individual capitalists, public authorities or even generous philanthropists - any market economy is inevitably doomed to endure a series of worsening, explosive crises leading finally to complete collapse.

Asserts that - regardless of the efforts of individual capitalists, public authorities or even generous philanthropists - any market economy is inevitably doomed to endure a series of worsening, explosive crises leading finally to complete collapse.

It is in this third volume that Marx sets out his central thesis that "the basic laws of motion of the capitalist mode of production lead to explosive crises and its ultimate collapse". Here we find not only a sustained economic and social description of capitalism as a system and the bourgeoisie as a class but also a full statement of why declining rates of profit and periodic crises of overproduction spell the inevitable end of capitalism and the likely birth of a far better society. This book was published by Engels in 1894.

Karl Marx was born in 1818 in Trier, Germany and studied in Bonn and Berlin. Influenced by Hegel, he later reacted against idealist philosophy and began to develop his own theory of historical materialism. He related the state of society to its economic foundations and mode of production, and recommended armed revolution on the part of the proletariat. Together with Engels, who he met in Paris, he wrote the Manifesto of the Communist Party. He lived in England as a refugee until his death in 1888, after participating in an unsuccessful revolution in Germany. Ernst Mandel was a member of the Belgian TUV from 1954 to 1963 and was chosen for the annual Alfred Marshall Lectures by Cambridge University in 1978. He died in 1995 and the Guardian described him as 'one of the most creative and independent-minded revolutionary Marxist thinkers of the post-war world.' Translated by David Fernbach with an introduction by Ernest Mandel

Introduction by Ernest Mandel Preface (Frederick Engels) BOOK III: THE PROCESS OF CAPITALIST PRODUCTION AS A WHOLE PART ONE: THE TRANSFORMATION OF SURPLUS-VALUE INTO PROFIT, AND OF THE RATE OF SURPLUS-VALUE INTO THE RATE OF PROFIT Chapter 1: Cost Price and Profit Chapter 2: The Rate of Profit Chapter 3: The Relationship between Rate of Profit and Rate of Surplus-Value Chapter 4: The Effect of the Turnover on the Rate of Profit Chapter 5: Economy in the Use of Constant Capital 1. General Considerations 2. Saving on the Conditions of Work at the Workers'' Expense 3. Economy in the Generation and Transmission of Power, and on Buildings 4. Utilization of the Refuse of Production 5. Economy through Inventions Chapter 6: The Effect of Changes in Price 1. Fluctuations in the Price of Raw Material; Their Direct Effects on the Rate of Profit 2. Revaluation and Devaluation of Capital; Release and Tying-Up of Capital 3. General Illustration: The Cotton Crisis 1861-5 Chapter 7: Supplementary Remarks PART TWO: THE TRANSFORMATION OF PROFIT INTO AVERAGE PROFIT Chapter 8: Different Compositions of Capital in Different Branches of Production, and the Resulting Variation in Rates of Profit Chapter 9: Formation of a General Rate of Profit (Average Rate of Profit), and Transformation of Commodity Values into Prices of Production Chapter 10: The Equalization of the General Rate of Profit through Competition. Market Prices and Market Values. Surplus Profit Chapter 11: The Effects of General Fluctuations in Wages on the Prices of Production Chapter 12: Supplementary Remarks 1. The Causes of a Change in the Price of Production 2. The Production Price of Commodities of Average Composition 3. The Capitalist''s Grounds for Compensation PART THREE: THE LAW OF THE TENDENTIAL FALL IN THE RATE OF PROFIT Chapter 13: The Law Itself Chapter 14: Counteracting Factors 1. More Intense Exploitation of Labour 2. Reduction of Wages below their Value 3. Cheapening of the Elements of Constant Capital 4. The Relative Surplus Population 5. Foreign Trade 6. The Increase in Share Capital Chapter 15: Development of the Law''s Internal Contradictions 1. General Considerations 2. The Conflict between the Extension of Production and Valorization 3. Surplus Capital alongside Surplus Population 4. Supplementary Remarks PART FOUR: THE TRANSFORMATION OF COMMODITY CAPITAL AND MONEY CAPITAL INTO COMMERCIAL CAPITAL AND MONEY-DEALING CAPITAL (MERCHANT''S CAPITAL) Chapter 16: Commercial Capital Chapter 17: Commercial Profit Chapter 18: The Turnover of Commercial Capital. Prices Chapter 19. Money-Dealing Capital Chapter 20: Historical Material on Merchant''s Capital PART FIVE: THE DIVISION OF PROFIT INTO INTEREST AND PROFIT OF ENTERPRISE Chapter 21: Interest-Bearing Capital Chapter 22: Division of Profit. Rate of Interest. "Natural" Rate of Interest Chapter 23: Interest and Profit of Enterprise Chapter 24: Interest-Bearing Capital as the Superficial Form of the Capital Relation Chapter 25: Credit and Fictitious Capital Chapter 26: Accumulation of Money Capital, and its Influence on the Rate of Interest Chapter 27: The Role of Credit in Capitalist Production Chapter 28: Means of Circulation and CApital. The Views of Tooke and Fullarton Chapter 29: Banking Capital''s Component Parts Chapter 30: Money Capital and Real Capital: I Chapter 31: Money Capital and Real Capital: II (Continuation) 1. Transformation of Money into Loan Capital 2. Transformation of Capital or Revenue into Money that is Transformed into Loan Capital Chapter 32: Money Capital and Real Capital: III (Conclusion) Chapter 33: The Means of Circulation under the Credit System Chapter 34: The Currency Principle and the English Bank Legislation of 1844 Chapter 35: Precious Metal and Rate of Exchange 1. The Movement of the Gold Reserve 2. The Exchange Rate Chapter 36: Pre-Capitalist Relations PART SIX: THE TRANSFORMATION OF SURPLUS PROFIT INTO GROUND-RENT Chapter 37: Introduction Chapter 38: Differential Rent in General Chapter 39: The First Form of Differential Rent (Differential Rent I) Chapter 40: The Second Form of Differential Rent (Differential Rent II) Chapter 41: Differential Rent II - First Case: Price of Production Constant Chapter 42: Differential Rent II - Second Case: Price of Production Falling 1. With the Productivity of the Extra Capital Investment Remaining Constant 2. A Falling Rate of Productivity for the Extra Capital 3. A Rising Rate of Productivity for the Extra Capital Chapter 43: Differential Rent II - Third Case: Rising Price of Production. Results Chapter 44: Differential Rent Even on the Poorest Land Cultivated Chapter 45: Absolute Ground-Rent Chapter 46: Rent of Buildings. Rent of Mines. Price of Land Chapter 47: The Genesis of Capitalist Ground-Rent 1. Introduction 2. Labour Rent 3. Rent in Kind 4. Money Rent 5. Share-Cropping and Small-Scale Peasant Ownership PART SEVEN: THE REVENUES AND THEIR SOURCES Chapter 48: The Trinity Formula Chapter 49: On the Analysis of the Production Process Chapter 50: The Illusion Created by Competition Chapter 51: Relations of Distribution and Relations of Production Chapter 52: Classes Supplement and Addendum to Volume 3 of Capital (Frederick Engels) 1. Law of Value and Rate of Profit 2. The Stock Exchange Quotations in Languages Other than English and German Index of Authorities Quoted General Index Note on Previous Editions of the Works of Marx and Engels Chronology of Works by Marx and Engels

Unfinished at the time of Marx's death in 1883 and first published with a preface by Frederick Engels in 1894, the third volume of Das Kapital strove to combine the theories and concepts of the two previous volumes in order to prove conclusively that capitalism is inherently unworkable as a permanent system for society.