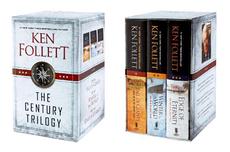 The #1 New York Times bestselling historical epic, the Century Trilogy, now in one deluxe boxed set. Ken Follett follows the fortunes of five international families--American, German, Russian, English, and Welsh--as they make their way through the 20th century. The boxed set includes all three volumes: Fall of Giants , Winter of the World , and Edge of Eternity . "[Follett] is a commanding storyteller who has taken on an impossibly large task and accomplished it with passion, intelligence, and skill." -- The Washington Post "Follett is masterly in conveying so much drama and historical information so vividly . . . grippingly told." -- The New York Times Book Review Look out for Ken's newest book, A Column of Fire , available now.

Ken Follett's career as a bestselling author has spanned more than three decades. He is the author of numerous immensely popular books, including "Eye of the Needle", "Triple", "The Key to Rebecca", "The Man From St. Petersburg", "On Wings of Eagles", "Lie Down With Lions", "The Pillars of the Earth", "A Dangerous Fortune", "The Third Twin", "The Hammer of Eden", and "World Without End". He lives in England with his wife, Barbara Follett, a British M.P.