ISBN: 9781524713119
ANNOTATION:
Morgan the librarian gives Jack and Annie magical baseball caps to wear at a special ball game in Brooklyn, New York. The magic tree house whisks them back to 1947 where they meet pioneering player Jackie Robinson and solve a mystery. Illustrations. 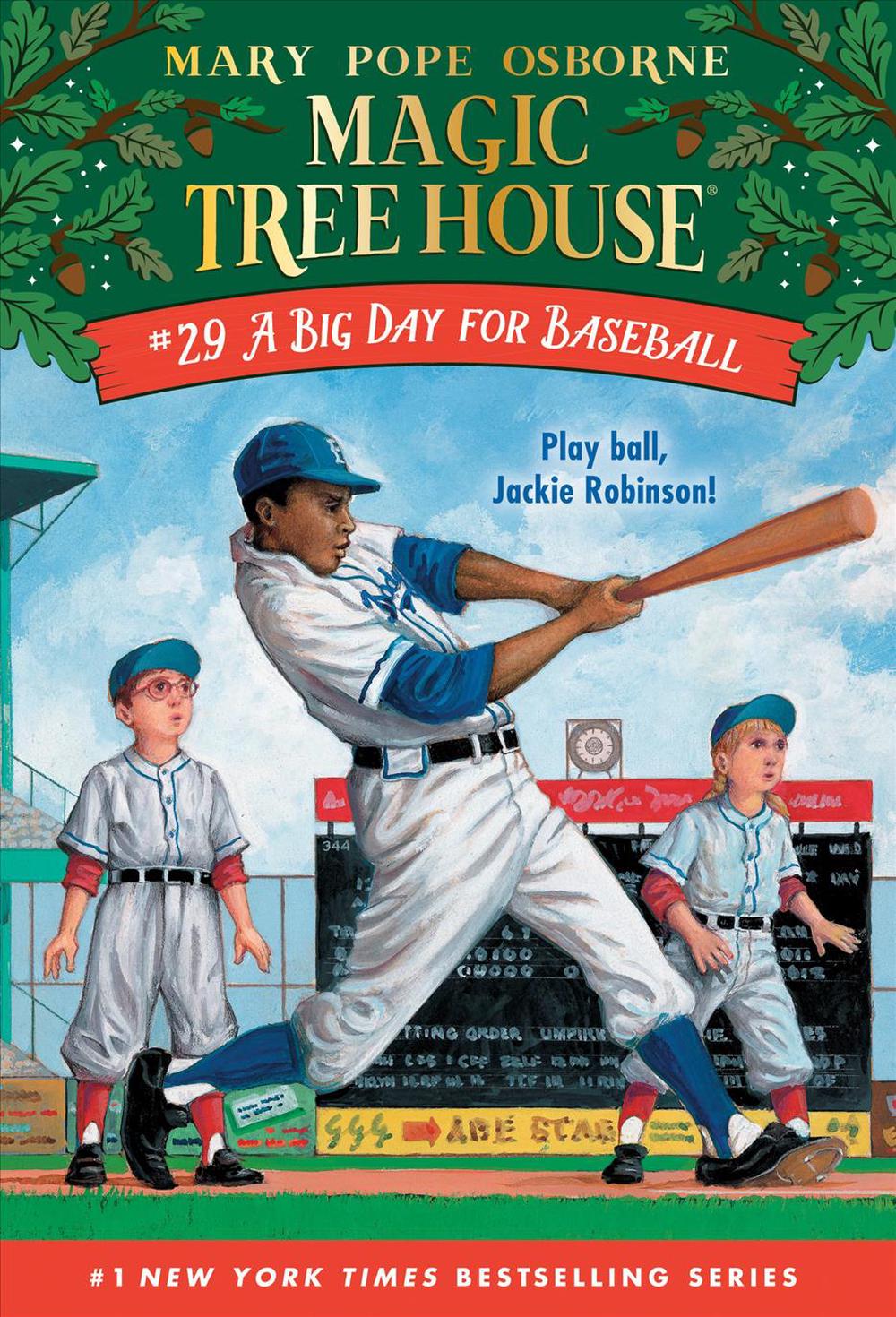 OTHER FORMATS:
ISBN: 9781524713119
ANNOTATION:
Morgan the librarian gives Jack and Annie magical baseball caps to wear at a special ball game in Brooklyn, New York. The magic tree house whisks them back to 1947 where they meet pioneering player Jackie Robinson and solve a mystery. Illustrations.

Morgan the librarian gives Jack and Annie magical baseball caps to wear at a special ball game in Brooklyn, New York. The magic tree house whisks them back to 1947 where they meet pioneering player Jackie Robinson and solve a mystery. Illustrations.

PLAY BALL! Jack and Annie aren't great baseball players . . . yet! Then Morgan the librarian gives them magical baseball caps that will make them experts. They just need to wear the caps to a special ballgame in Brooklyn, New York. The magic tree house whisks them back to 1947! When they arrive, Jack and Annie find out that they will be batboys in the game-not ballplayers. What exactly does Morgan want them to learn? And what's so special about this game? They only have nine innings to find out! Discover history, mystery, humor, and baseball in this one-of-a-kind adventure in Mary Pope Osborne's New York Times bestselling Magic Tree House series lauded by parents and teachers as books that encourage reading. Magic Tree House books, with fiction and nonfiction titles, are perfect for parents and teachers using the Core Curriculum. With a blend of magic, adventure, history, science, danger, and cuteness, the topics range from kid pleasers (pirates, the Titanic, pandas) to curriculum perfect (rain forest, American Revolution, Abraham Lincoln) to seasonal shoo-ins (Halloween, Christmas, Thanksgiving). There is truly something for everyone here! Have more fun with Jack and Annie on the Magic Tree House website at MagicTreeHouse.com!

MARY POPE OSBORNE is the author of the New York Times number one bestselling Magic Tree House series. She and her husband, writer Will Osborne (author of Magic Tree House- The Musical), live in northwestern Connecticut with their three dogs. Ms. Osborne is also the coauthor of the companion Magic Tree House Fact Trackers series with Will and with her sister, Natalie Pope Boyce.

"A Big Day For Baseball is a grand slam. . . The Magic Tree House series continues with Mary Pope Osborne's latest book, A Big Day for Baseball. Jack and Annie's time travel adventures take them back to Jackie Robinson's time in the majors. A Big Day for Baseball has a number of twists and turns that will keep readers on their toes as the story unfolds." --Sports Illustrated Kids

" A Big Day For Baseball is a grand slam. . . The Magic Tree House series continues with Mary Pope Osborne's latest book, A Big Day for Baseball . Jack and Annie's time travel adventures take them back to Jackie Robinson's time in the majors. A Big Day for Baseball has a number of twists and turns that will keep readers on their toes as the story unfolds." -- Sports Illustrated Kids

The early Saturday-morning air was damp and chilly. Jack sat on his front porch steps. His chin was cupped in his hands. Annie came out the front door. "Do you want Mom to take us to the rec center now?" she asked. It was the day for baseball tryouts. "I''ve decided not to go," said Jack. Annie sat down next to him. "What''s wrong?" she asked. "I can''t stop thinking about last season''s tryouts," said Jack. "I fell down when I swung the bat. Everybody laughed." "Yeah, well, everybody laughed at me, too," said Annie. "Remember, I threw the ball to the wrong team." "So maybe neither of us should go," said Jack. "But our whole family loves baseball," said Annie. "We read about it. We watch it. We learn batting averages. We--" Before Annie could finish, something dropped from the sky and rolled across their front yard. "What''s that?" said Jack. He and Annie ran down the steps. A small white ball lay in the grass. Annie grabbed it. "It''s a baseball!" she said. "Where did it come from?" said Jack. He and Annie walked to the sidewalk and looked up and down their street. No one was there. "Maybe it''s from another world," whispered Annie. She handed the ball to Jack. "That''s crazy," said Jack. "What other world?" "Think about it," said Annie. "One second, we''re talking about baseball--and how we don''t want to go to tryouts. The next, this baseball drops from the sky!" "Oh. You mean--" said Jack. "Morgan!" Jack and Annie said together. Annie took off down the sidewalk. "Let''s go!" she called to Jack. "Hold on!" Jack shouted. He put the mysterious ball inside his backpack and raced after Annie. Jack and Annie crossed the street and dashed into the Frog Creek woods. They hurried between the trees until they came to the tallest oak. The magic tree house was back. "Yay, team!" said Annie. She grabbed the rope ladder and climbed up. Jack followed her into the tree house. Leaf shadows danced on the wooden floor. Two gray baseball caps sat in the dappled light. Next to the caps was a book: history of baseball. A red leather bookmark was sticking out from the pages. Jack picked up the book and opened to the bookmark. The page showed a photo of a baseball stadium. The caption beneath it said: Ebb e ts Fi e ld, B rooklyn, Ne w Y ork, April 15, 1947 "Ebbets Field?" said Jack. "I''ve heard of that. It was a famous ballpark." "Look, there''s a message on the bookmark," said Annie. Jack held the bookmark up to the light. "It''s Morgan''s handwriting!" he said. He read aloud: ''Twas a big day for baseball So many years ago. Journey to Ebbets Field To learn what you should know. "Learn what we should know?" repeated Jack. "To become better ballplayers?" "Sounds like it!" said Annie. "Morgan must have known about the tryouts." She read the next verse: These caps are magic Made only for you To give you the skill To know what to do. "Oh, man, it sounds like these caps will make us great players!" said Jack. "Yay!" said Annie. She read on: As long as you wear them All others will see The skillful people You''re pretending to be. "I get it! Everyone else will see us as great players!" said Annie. "In a Little League game?" said Jack. "Why not?" said Annie. "Little League teams must have played at Ebbets Field, too." "Yeah, probably all kinds of teams played there," said Jack. Annie read more: When you hear the final score, Give the ball with the name To the one who knows best The rules of the game. "Our baseball has a name?" said Jack. He pulled the ball out of his pack and turned it over in his hands. "No name here." "Well, maybe we''re supposed to give it one," said Annie. "How about Ballee?" "Ballee?" said Jack. "I don''t think so." "Okay, okay. How about Fly Ball?" said Annie. "It flew down to us." "Fine, whatever," said Jack. He put Fly Ball back into his pack. "Ready?" "Yes! This is going to be so much fun," said Annie. Jack pointed at the photo of Brooklyn, New York. "I wish we could go there!" he said. The wind started to blow. The tree house started to spin. It spun faster and faster. Then everything was still. Absolutely still.