The Endgame: The Inside Story of the Struggle for Iraq, from George W. Bush to Barack Obama

ISBN: 9780307388940
ANNOTATION:
In this follow-up to their national bestseller "Cobra II," Gordon and General Trainor deftly piece together the story of the most widely reported but least understood war in American history. This stunning account of the political and military struggle between American, Iraqi, and Iranian forces brings together vivid reporting of diplomatic intrigue and gripping accounts. 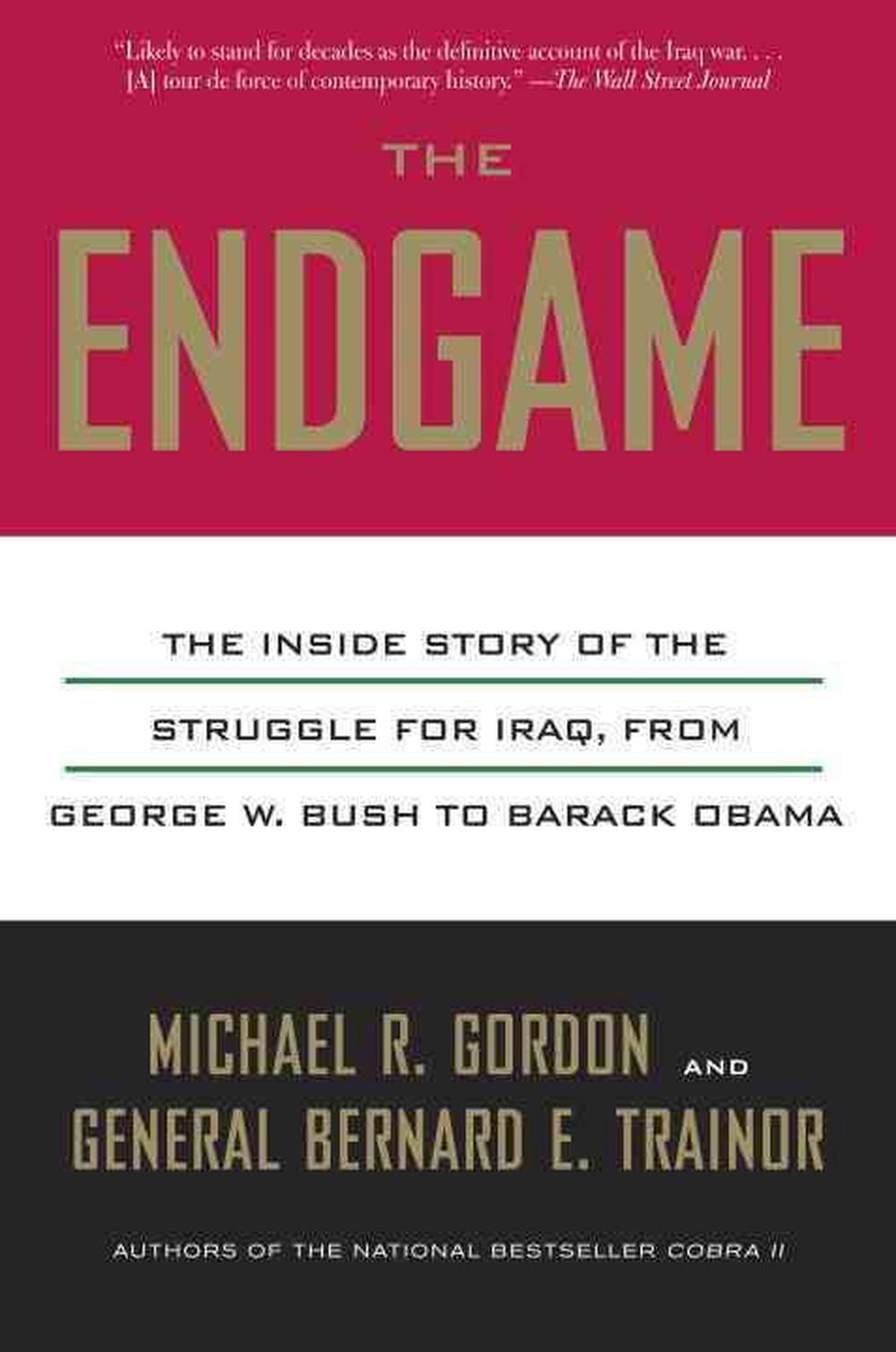 OTHER FORMATS:
ISBN: 9780307388940
ANNOTATION:
In this follow-up to their national bestseller "Cobra II," Gordon and General Trainor deftly piece together the story of the most widely reported but least understood war in American history. This stunning account of the political and military struggle between American, Iraqi, and Iranian forces brings together vivid reporting of diplomatic intrigue and gripping accounts.

In this follow-up to their national bestseller "Cobra II," Gordon and General Trainor deftly piece together the story of the most widely reported but least understood war in American history. This stunning account of the political and military struggle between American, Iraqi, and Iranian forces brings together vivid reporting of diplomatic intrigue and gripping accounts.

A Wall Street Journal Best Nonfiction Book of 2012 In this follow-up to their national bestseller Cobra II , Michael Gordon and General Bernard E. Trainor deftly piece together the story of the most widely reported but least understood war in American history. This stunning account of the political and military struggle between American, Iraqi, and Iranian forces brings together vivid reporting of diplomatic intrigue and gripping accounts of the blow-by-blow fighting that lasted nearly a decade. Informed by brilliant research, classified documents, and extensive interviews with key figures--including everyone from the intelligence community to Sunni and Shi'ite leaders and former insurgents to senior Iraqi military officers-- The Endgame presents a riveting chronicle of the occupation of Iraq to the withdrawal of American troops that is sure to remain the essential account of the war for years to come.

Michael R. Gordon is the chief military correspondent for "The New York Times," where he has worked since 1985. He is the coauthor, with Lieutenant General Bernard E. Trainor, of "The Generals' War." He has covered the Iraq War, the American intervention in Afghanistan, the Kosovo conflict, the Russian war in Chechnya, the 1991 Persian Gulf War, and the American invasion of Panama. He lives in the Washington, D.C., area.
Bernard E. Trainor, a retired Marine Corps lieutenant general, was a military correspondent for "The New York Times" from 1986 to 1990. He was director of the National Sec

Praise for Michael R. Gordon and General Bernard E. Trainor's The Endgame : "Likely to stand for decades as the definitive account of the Iraq war. . . . [A] tour de force of contemporary history. . . . The best tribute we can pay to the Iraq veterans is to remember what they did, and that is precisely the achievement of [ The Endgame ]." -- The Wall Street Journal

Prologue No one book can capture an event as complex as a war, especially a nine-year war in a distant nation that from its outset was permeated by tribal, religious, ethnic, local, and regional politics. Nonetheless, this volume seeks to provide the most comprehensive account to date of the United States'' involvement in Iraq. From the start, our goal was to cover Iraq''s halting political development as well as the military battles. We gave attention to decisions in Baghdad as well as Washington. And we covered the clashes and political maneuvering from the early days of the American-led occupation, through the descent into sectarian violence, the surge that pulled Iraq back from the brink of civil war, and the vexing aftermath. This was an ambitious project, but we have been covering the Iraq War from the start. Through two American presidents, a succession of Iraqi prime ministers, and a variety of United States commanders, we tracked events on the ground in Iraq and in Washington. We were present for many of the ferocious battles in Anbar, Diyala, Mosul, and Sadr City, and we covered the nation''s political development. We saw American and Iraqi blood spilled, and we interacted with the generals, diplomats, and politicians on whose shoulders the decisions of the war rested. Too many American accounts of the war in Iraq have left out the Iraqis, or cast them as little more than a backdrop for dramas that were played out in Washington or among American commanders in Baghdad. But they are essential actors in their own nation''s drama. For this reason, Prime Minister Nuri al-Maliki and rivals like Ayad Allawi, Massoud Barzani, and Adil Abd al-Mahdi share the list of the hundreds of interviews we conducted along with Iraqi generals, police commanders, tribal sheikhs, and student protesters. We also interviewed myriad American and British generals, as well as officers and enlisted troops down to the platoon level. The objective was to weave together battles fought by the troops with closed-door Green Zone and White House meetings from the conflict''s earlier days through the military withdrawal in December 2011. More than that, we have sought to explain not just what happened when and where, but why. We have been aided in our task by unprecedented access to classified documents that chronicle the war as it was seen from the American embassy in Baghdad, from the White House, from military headquarters across Iraq, and from the command posts of special operations and intelligence units. The troves of secret documents on which we were able to draw shed light on corners of the Iraq story that would otherwise have remained dark for years. Internal military and State Department reports have provided glimpses of roads not taken and opportunities missed. Firsthand after-action reports and cumulative briefings chart and bring to life the nighttime campaign waged in Iraq by the Joint Special Operations Command, the headquarters overseeing America''s most elite and secretive commando units, both against Sunni insurgents and later against Shiite militias and even the Quds Force, Iran''s operations and intelligence arm in Iraq. Still-classified oral histories show the war as commanders recounted it. CIA and other intelligence reports helped complete the mosaic. In painting a picture of America''s complicated struggle with Iran in Iraq, for instance, we have been able to draw on General David Petraeus''s classified updates to Defense Secretary Robert Gates, an unauthorized disclosure that opens a window into the inner workings of the war and describes Petraeus''s own third-party interactions with the leader of that force, Qasim Suleimani. Other documents provide rare glimpses of the war through the eyes of those who fought against the United States and the Iraqi government. Detailed reports on the interrogations of Qais and Laith al-Khazali, two Iraqi Shiite militants captured by the British Special Air Service in 2007, offer an inside view of Iraq''s Sadrist political movement and militias and its ties to Iran. Transcripts of the interrogations of Sunni insurgents captured by American troops, along with internal reports by insurgent commanders recovered from hard drives and flash drives, have helped us understand the activities of Al-Qaeda in Iraq, the local franchise of the global terrorist group that was the United States'' main antagonist for much of the war. Heavily classified embassy cables, internal Red Team analyses organized by the American military command, notes of critical meetings in Washington and Baghdad, and classified assessments and war plans commissioned by the generals who prosecuted the war round out our account. We have protected the intelligence community''s sources and methods. By combining extensive interviews with this documentary history, we have sought to convey a full and rich history of a tumultuous period that has put its stamp on the American military, has decisively altered the history of Iraq, and that will influence events in the broader Middle East for decades to come.