Breaking Through Power: It's Easier Than We Think

ISBN: 9780872867055
ANNOTATION:
A Thomas Paine-style indictment of how wealthy corporations control politics and how average Americans, through democracy, can fight-back and win. 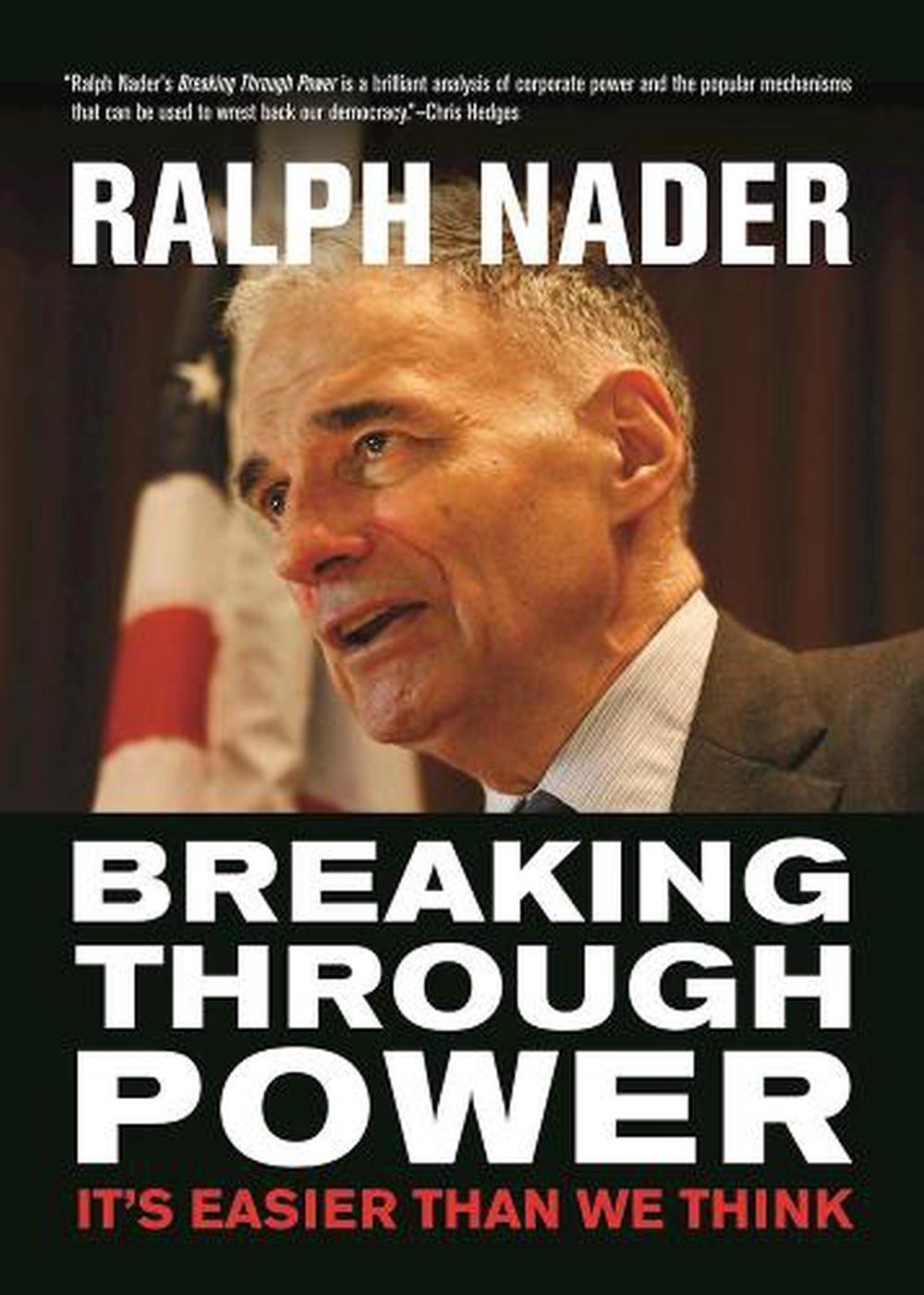 OTHER FORMATS:
ISBN: 9780872867055
ANNOTATION:
A Thomas Paine-style indictment of how wealthy corporations control politics and how average Americans, through democracy, can fight-back and win.

A Thomas Paine-style indictment of how wealthy corporations control politics and how average Americans, through democracy, can fight-back and win.

"Nader's assessment of how concentrated wealth and power undermine democracy is clear and compelling, but it's his substantive vision of how we ought to respond that makes Breaking Through Power essential reading. Written just before Donald Trump's Electoral College victory, Nader's latest book reads with even greater urgency now."--Yes Magazine

In Breaking Through Power, Ralph Nader draws from a lifetime waging--and often winning--David vs. Goliath battles against big corporations and the United States government. In this succinct, Tom Paine-style wake-up call, the iconic consumer advocate highlights the success stories of fellow Americans who organize change and work together to derail the many ways in which wealth manipulates politics, labor, media, the environment, and the quality of national life today. Nader makes an inspired case about how the nation can--and must--be democratically managed by communities guided by the United States Constitution, not by the dictates of big businesses and the wealthy few. This is classic Ralph Nader, a crystallization of the core political beliefs and commitments that have driven his lifetime of advocacy for greater democracy.

"Ralph Nader is the grand progressive of our time. We overlook his words at our own peril! This book is required reading."--Cornel West

"Ralph Nader's Breaking Through Power is a brilliant analysis of corporate power and the popular mechanisms that can be used to wrest back our democracy. No one has been fighting corporate domination longer, or understands it better, than Nader, who will go down in history not only as a prophet but an example of what it means to live the moral life. We disregard his wisdom and his courage at our peril."--Chris Hedges, Pulitzer-Prize winner and author of Wages of Rebellion: The Moral Imperative of Revolt

"Nader goes beyond delineating the problem and provides a critical prescription to battle the toxicity of unjust power--one that every individual can, and must, embrace."--Nomi Prins, author, All the Presidents' Bankers

"People are recognizing that our founding, fundamental values of fairness, justice, and opportunity for all--the very values that define our America--are being shoved aside to create an un-America of plutocracy and autocracy. Ralph Nader's new book Breaking Through Power provides progressive boat-rockers with inspiration and a plan for reclaiming America from the greedy Plutocrats and Fat Cats who think democracy is for sale to the highest bidder."--Jim Hightower

"I read Ralph Nader for the same reasons that I read Tom Paine. He knows what he thinks, says what he means, and his courage is a lesson for us all."--Lewis Lapham

"Nader insists on speaking up for the little people and backs his arguments and decent sentiments with hard facts."--Publishers Weekly

"This book is short, easy to read, and deserves more than five stars. Nader speaks for the average American, and backs up his arguments with facts. This is extremely highly recommended."--Paul Lappen, Midwest Book Review

About Ralph Nader: Named by The Atlantic as one of the hundred most influential figures in American history, and by Time and Life magazines as one of the most influential Americans of the twentieth century, Ralph Nader has helped us drive safer cars, eat healthier food, breathe better air, drink cleaner water, and work in safer environments for more than four decades. Nader's recent books include Animal Envy, Unstoppable, The Good Fight, and the bestseller, Seventeen Traditions. Nader writes a syndicated column, has his own radio show, and gives lectures and interviews year round.

"Ralph Nader's latest book is a how-to guide for fighting corporate power. Nader is still pressing forward, still cautiously hopeful--even after so many decades in the arena. Things may seem grim but the numbers and the evidence are on our side, he's saying. We know the problems. We know what needs to be done. Here's an action plan. It's time to stop talking and get to work."--Theo Anderson, In These Times "Nader sustains a strong case of grievances against the 'power of the plutocracy' and 'the present two-party duopoly that ministers to their demands.' In the final chapter, the lengthy 'Why Democracy Works,' the author offers a suggestion for 'Citizens Summons,' which would summon members of Congress home to hear the grievances of their constituents. In an era of political gridlock, Nader argues, mostly convincingly, that a 'left/right alliance' can get the country back on track."--Kirkus Reviews "Ralph Nader's small book packs a big wallop and is nothing less than a portable pocket dynamo for energizing citizen action for change. It is a must read for all who want to make a powerful case that an abuse of power is neither deserved nor inevitable, mobilize support for a cause, and chart a course leading to corporate and government responsiveness and accountability. Breaking Through Power reminds us why Mr. Nader has been so influential for over half a century. His soaring optimism and confidence in the ability of people themselves to take back control of their lives demonstrates that the best of Mr. Nader's incomparable legacy is likely yet to come."--Nick Allard, President and Dean, Brooklyn Law School "... books like this inspire and create a common language and framework for us to help divert the historical progression and bend the arc towards justice. We need clarity of thought and clarity of principle to succeed and we need to learn how to be insanely successful in these endeavors because, frankly, organized, civilized life depends on it."--Romi Mahajan, Countercurrents