ISBN: 9781496213945
ANNOTATION:
Offers a bold new look at the history of homesteading, overturning what for decades has been the orthodox scholarly view. Homesteading the Plains reexamines old data and draws from newly available digitized records to reassess the current interpretation's principal tenets. 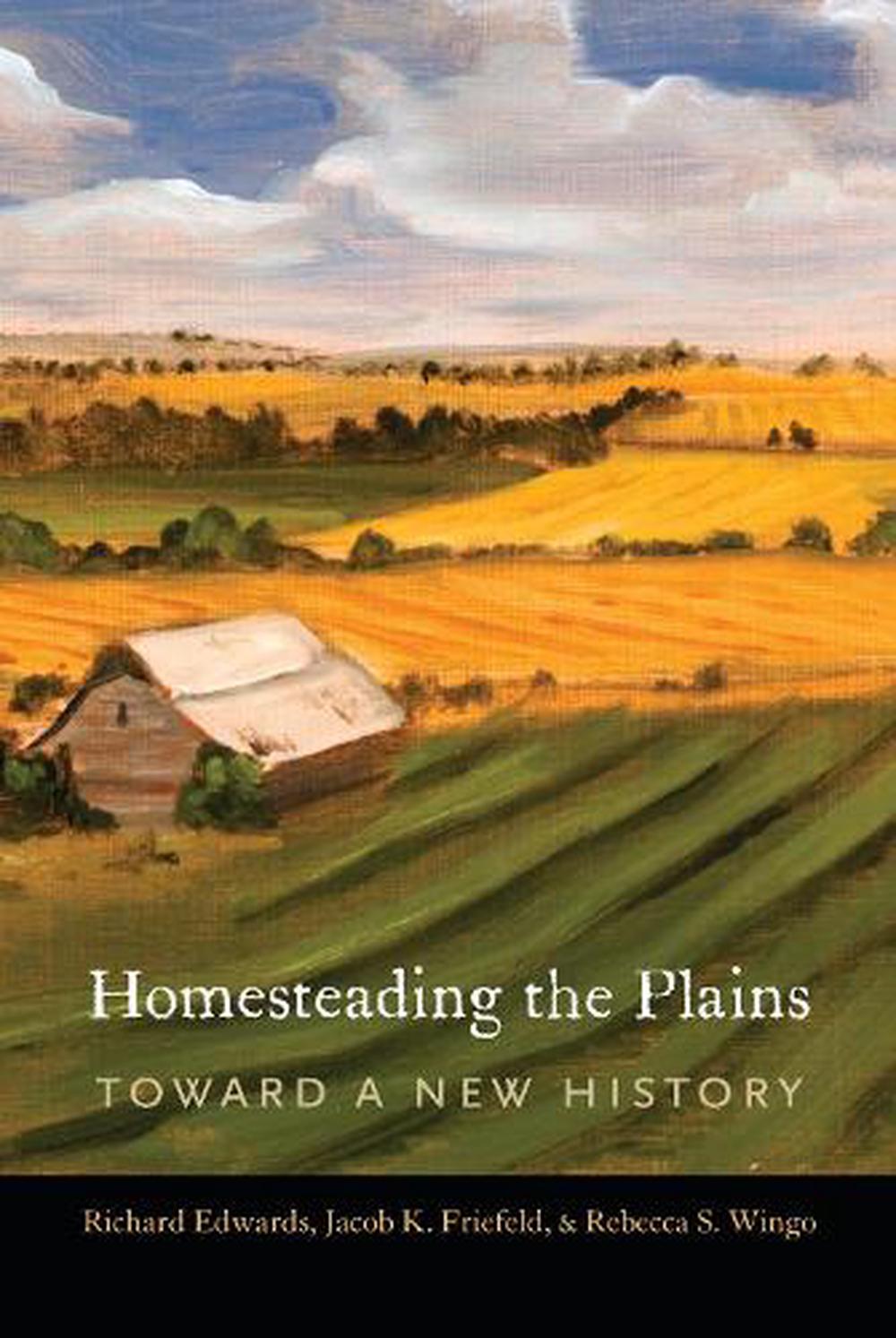 OTHER FORMATS:
ISBN: 9781496213945
ANNOTATION:
Offers a bold new look at the history of homesteading, overturning what for decades has been the orthodox scholarly view. Homesteading the Plains reexamines old data and draws from newly available digitized records to reassess the current interpretation's principal tenets.

Offers a bold new look at the history of homesteading, overturning what for decades has been the orthodox scholarly view. Homesteading the Plains reexamines old data and draws from newly available digitized records to reassess the current interpretation's principal tenets.

Homesteading the Plains offers a bold new look at the history of homesteading, overturning what for decades has been the orthodox scholarly view. The authors begin by noting the striking disparity between the public's perception of homesteading as a cherished part of our national narrative and most scholars' harshly negative and dismissive treatment.

Homesteading the Plains reexamines old data and draws from newly available digitized records to reassess the current interpretation's four principal tenets: Homesteading was a minor factor in farm formation, with most western farmers purchasing their land; most homesteaders failed to prove their claims; the homesteading process was rife with corruption and fraud; and homesteading caused Indian land dispossession. Using data instead of anecdotes and focusing mainly on the nineteenth century, Homesteading the Plains demonstrates that the first three tenets are wrong and the fourth only partially true. In short, the public's perception of homesteading is perhaps more accurate than the one scholars have constructed.

Homesteading the Plains provides the basis for an understanding of homesteading that is startlingly different from the current scholarly orthodoxy.

"A provocative plea for a new history of the homestead laws. The authors present a compelling brief for historical revisionism that critiques dominant interpretations of the homestead laws. Anyone interested in understanding the place of these almost mythic laws in the American past must read Homesteading the Plains."-Michael Grossberg, Sally M. Reahard Professor of History and Professor of Law at Indiana University and author of Governing the Hearth: Law and the Family in Nineteenth-Century America

-- Michael Grossberg "Homesteading the Plains fundamentally alters the dominant frame for understanding the costs and consequences of settling the Great Plains. . . . This book upends many tired and baseless myths about the settlement of the continent. The authors tell a nuanced, fascinating national story that is regionally rooted and beautifully illustrated with tables, charts and maps."-Karen V. Hansen, professor of Sociology and Women's, Gender, and Sexuality Studies at Brandeis University and author of Encounter on the Great Plains: Scandinavian Settlers and the Dispossession of Dakota Indians, 1890-1930 -- Karen V. Hansen "This careful empirical analysis provides a long overdue corrective to frequently cited but flawed 'facts' about homesteading in the nineteenth-century West. The authors persuasively demonstrate the impressive achievements of the Homestead Act and incisively evaluate the degree of fraud and Indian land dispossession on the homesteading frontier."-Brian Q. Cannon, professor of history at Brigham Young University and author of Reopening the Frontier: Homesteading in the Modern West -- Brian Q. Cannon "Solidly researched, clearly written, logically organized, and cogently argued. The publication of Homesteading the Plains will not only be a contribution to knowledge but also field-altering in terms of the way scholars must hereafter write and teach about the Homestead Act."-R. Douglas Hurt, professor of history at Purdue University and author of The Big Empty: The Great Plains in the Twentieth Century -- R. Douglas Hurt "Homesteading the Plains unsettles longstanding homesteading myths and histories alike. Provocative and illuminating, it brings new data, technologies, and questions to open new historical terrain."-Elizabeth Jameson, professor of history at the University of Calgary and past president of the Western Historical Association and coeditor of The Women's West -- Elizabeth Jameson "[Homesteading the Plains] integrates an important spatial dimension into our understanding of the relationship between homesteading and Native American dispossession that has great potential for reshaping the history of land policy in the Americas."-Sara Gregg, author of Managing the Mountains: Land Use Planning, the New Deal, and the Creation of a Federal Landscape in Appalachia -- Sara Gregg "Homesteading the Plains demolishes much conventional wisdom about homesteading. . . . This is the most thoughtful analysis of homesteading to appear in many years."-Walter Nugent, emeritus professor of history at University of Notre Dame and author of Into the West: The Story of Its People -- Walter Nugent "Homesteading encapsulates into a single term and a famous law a tangled history that becomes a simple success in popular memory and an increasingly marginal event in most scholarly accounts. Homesteading the Plains, the first major scholarly study in a generation, uses new data sources and new digital techniques to present a nuanced account of an important government program that scholars will need to reevaluate."-Richard White, Margaret Byrne Professor of American History at Stanford University and author of Railroaded: The Transcontinentals and the Making of Modern America

-- Richard White "The authors' detailed analysis of data within a limited geographical context provides a fact-driven template or method to revisit homesteading across the West. Furthermore, this study inspires more questions about how the regional nuances of homesteading contributed to US history on a larger scale."-Tracey Hanshew, H-Texas -- Tracey Hanshew H-Texas "Rarely does a book completely change the conversation about a historical topic. This book, however, does just that. . . . This great book is one that historians of the American West and anyone seeking to understand how history is written and revised responsibly should read."-Pamela Riney-Kehrberg, South Dakota History -- Pamela Riney-Kehrberg South Dakota History "Edwards, Friefeld, and Wingo make a strong case for their hypotheses, showing in a statistically well-documented way that homesteading was indeed a crucial part of western settlement, that there was much less fraud than previously suggested, that most homesteaders did successfully prove their claims, and that homesteading was not always responsible for Indian land dispossession. I appreciate the lessons learned."-Samuel Otterstrom, Historical Geography -- Samuel Otterstrom Historical Geography "Anyone interested in the history of the American West will want to read this book. Stop and think what you have believed about homesteading, or what your professors taught you-this volume will give you a new perspective."-Patricia Ann Owens, Chronicles of Oklahoma -- Patricia Ann Owens Chronicles of Oklahoma "Even though Edwards, Friefeld, and Wingo have successfully revived homesteading history, their greatest achievement is in contributing to the historical field in general. They demonstrate that large, burdensome record groups such as the General Land Office files at NARA should not be ignored. Instead, pairing them with powerful, new technologies such as GIS not only provides a new method to reexamine old assumptions, but can also lead to new questions for historians to explore. . . . With a wealth of information being made available through nationwide digitization efforts, vast possibilities for continued research remain. For anyone concerned about the future of homesteading history, have no fear; it is alive and well."-Brandon Duxbury, Annals of Wyoming -- Brandon Duxbury Annals of Wyoming "Homesteading the Plains in an important book. The authors apply new tools and innovative techniques to an old, nearly moribund topic. A regeneration of the field should certainly follow. Anyone interested in the history of the Great Plains will benefit from this exciting research."-Annals of Iowa Annals of Iowa "Homesteading the Plains is an important revisionist work-a must-read for those interested in the revitalization of historical interest in homesteading and the settlement of the Far West."-Mark M. Carroll, Western Historical Quarterly -- Mark M. Carroll Western Historical Quarterly "Homesteading the Plains represents an exciting new starting point for studying the Homestead Act's impact on agricultural expansion."-Ginette Aley, Kansas History -- Ginette Aley Kansas History "Homesteading the Plains is a "must-read" for Great Plains scholars, as well as for those interested in the American West and in GIS applications. It is a much-needed call for a revitalization of homesteading scholarship, and an example of how dramatically technology and historians' increased access to data can shift the historiography. The authors should be congratulated on their contribution to future Great Plains studies, as their book will doubtless serve as a fine kick-start to a new renaissance in homesteading research."-Julie Courtwright, Missouri Historical Review -- Julie Courtwright Missouri Historical Review "Recommended for all plains folk who like to brandish their homestead certificates, or who just share a tie to the land."-Prairie Public News Prairie Public News "Homesteading the Plains showcases the value of digitized homestead records, arguing persuasively that we need to reconsider and challenge long accepted and widely circulated "stylized facts" in the light of the detailed research now possible."-Sarah Carter, Montana: The Magazine of Western History -- Sarah Carter Montana: The Magazine of Western History "Homesteading the Plains does an excellent job of providing reasons to be excited for the future of homesteading research while celebrating the past success of the Homestead Act, its principal role in the history of both the Great Plains and the entire country, and its enduring legacy on the land and the people who call it home."-Andrew Husa, Great Plains Quarterly -- Andrew Husa Great Plains Quarterly "Homesteading the Plains is a provocative, well-informed, and strongly argued analysis of the role of homesteading in settling the Great Plains from 1863 to 1900. . . . Throughout the book the factual evidence is enriched by the stories of individual lives which are also embedded in the records. The result is a definitive analysis which is also a pleasure to read. It will serve as a model for future historians who want to circumvent the myths and find the facts about homesteading and its role in the development of the nation."-David J. Wishart, Nebraska History -- David J. Wishart Nebraska History "A welcome contribution to the understanding of our region."-Omaha World-Herald Omaha World-Herald "Homesteading looms large in the folklore and memories of European settlement of the North American Great Plains, but has almost disappeared from professional research and writing, including mainstream US history textbooks. These three authors aim to revise the standardized views of homesteading. . . . Every library with any interest in frontier/western/Great Plains history should have a copy of this book."-S. D. Reschly, Choice -- S. D. Reschly Choice

"This careful empirical analysis provides a long overdue corrective to frequently cited but flawed 'facts' about homesteading in the nineteenth-century West. The authors persuasively demonstrate the impressive achievements of the Homestead Act and incisively evaluate the degree of fraud and Indian land dispossession on the homesteading frontier."--Brian Q. Cannon, professor of history at Brigham Young University and author of Reopening the Frontier: Homesteading in the Modern West