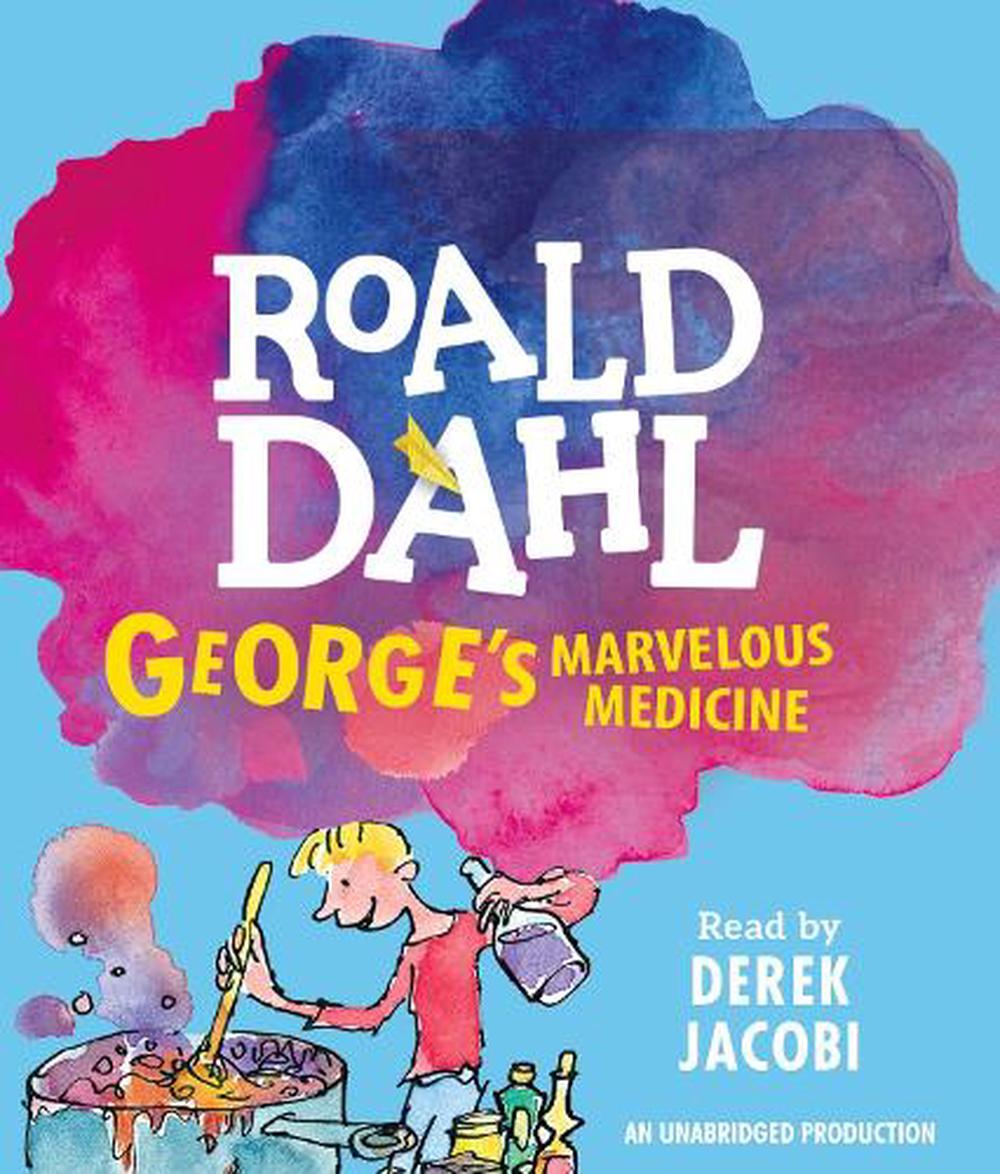 "Roald Dahl sometimes shared a tonal kinship with Ogden Nash, and he could demonstrate a verbal inventiveness nearly Seussian...[His] stories work better in audio than in print." - The New York Times A taste of her own medicine. George is alone in the house with Grandma. The most horrid, grizzly old grunion of a grandma ever. She needs something stronger than her usual medicine to cure her grouchiness. A special grandma medicine, a remedy for everything . And George knows just what to put into it. Grandma's in for the surprise of her life--and so is George, when he sees the results of his mixture!

Roald Dahl is considered one of the most beloved writers of our time. Although he passed away in 1990, his popularity continues to increase as his fantastic novels, including "The Witches" and" Matilda", delight an ever-growing legion of fans.

"A magic medicine it shall be!" George sat himself down at the table in the kitchen. He was shaking a little. Oh, how he hated Grandma! He really hated that horrid old witchy woman. And all of a sudden he had a tremendous urge to do something about her. Something whopping. Something absolutely terrific. A real shocker. A sort of explosion. "I''m not going to be frightened by her," he said softly to himself. But he was frightened. And that''s why he wanted suddenly to explode her away. Well...not quite away. But he did want to shake the old woman up a bit. Very well, then. What should it be, this whopping terrific exploding shocker for Grandma? As George sat there pondering this interesting problem, his eye fell upon the bottle of Grandma''s brown medicine standing on the sideboard. Rotten stuff it seemed to be...and it didn''t do her the slightest bit of good. She was always just as horrid after she''d had it as she''d been before. So-ho! thought George suddenly. I shall make her a new medicine, one that is so strong and so fierce and so fantastic it will either cure her completely or blow off the top of her head. "Here we go, then!" cried George, jumping up from the table. "A magic medicine it shall be!" Puffin Books by Roald Dahl The BFG Boy: Tales of Childhood Charlie and the Chocolate Factory Charlie and the Great Glass Elevator Danny the Champion of the World Dirty Beasts The Enormous Crocodile Esio Trot Fantastic Mr. Fox George''s Marvelous Medicine The Giraffe and the Pelly and Me Going Solo James and the Giant Peach The Magic Finger Matilda The Minpins Roald Dahl''s Revolting Rhymes The Twits The Vicar of Nibbleswicke The Witches The Wonderful Story of Henry Sugar and Six More Roald Dahl George''s Marvelous Medicine illustrated by Quentin Blake PUFFIN BOOKS Grandma "I'' m going shopping in the village," George''s mother said to George on Saturday morning. "So be a good boy and don''t get into mischief." This was a silly thing to say to a small boy at any time. It immediately made him wonder what sort of mischief he might get into. "And don''t forget to give Grandma her medicine at eleven o''clock," the mother said. Then out she went, closing the back door behind her. Grandma, who was dozing in her chair by the window, opened one wicked little eye and said, "Now you heard what your mother said, George. Don''t forget my medicine." "No, Grandma," George said. "And just try to behave yourself for once while she''s away." "Yes, Grandma," George said. George was bored to tears. He didn''t have a brother or a sister. His father was a farmer, and the farm they lived on was miles away from anywhere, so there were never any children to play with. He was tired of staring at pigs and hens and cows and sheep. He was especially tired of having to live in the same house as that grizzly old grunion of a grandma. Looking after her all by himself was hardly the most exciting way to spend a Saturday morning. "You can make me a nice cup of tea for a start," Grandma said to George. "That''ll keep you out of mischief for a few minutes." "Yes, Grandma," George said. George couldn''t help disliking Grandma. She was a selfish grumpy old woman. She had pale brown teeth and a small puckered-up mouth like a dog''s bottom. "How much sugar in your tea today, Grandma?" George asked her. "One spoonful," she said. "And no milk." Most grandmothers are lovely, kind, helpful old ladies, but not this one. She spent all day and every day sitting in her chair by the window, and she was always complaining, grousing, grouching, grumbling, griping about something or other. Never once, even on her best days, had she smiled at George and said, "Well, how are you this morning, George?" or, "Why don''t you and I have a game of Snakes and Ladders?" or, "How was school today?" She didn''t seem to care about other people, only about herself. She was a miserable old grouch. George went into the kitchen and made Grandma a cup of tea with a teabag. He put one spoon of sugar in it and no milk. He stirred the sugar well and carried the cup into the living room. Grandma sipped the tea. "It''s not sweet enough," she said. "Put more sugar in." George took the cup back to the kitchen and added another spoonful of sugar. He stirred it again and carried it carefully in to Grandma. "Where''s the saucer?" she said. "I won''t have a cup without a saucer." George fetched her a saucer.