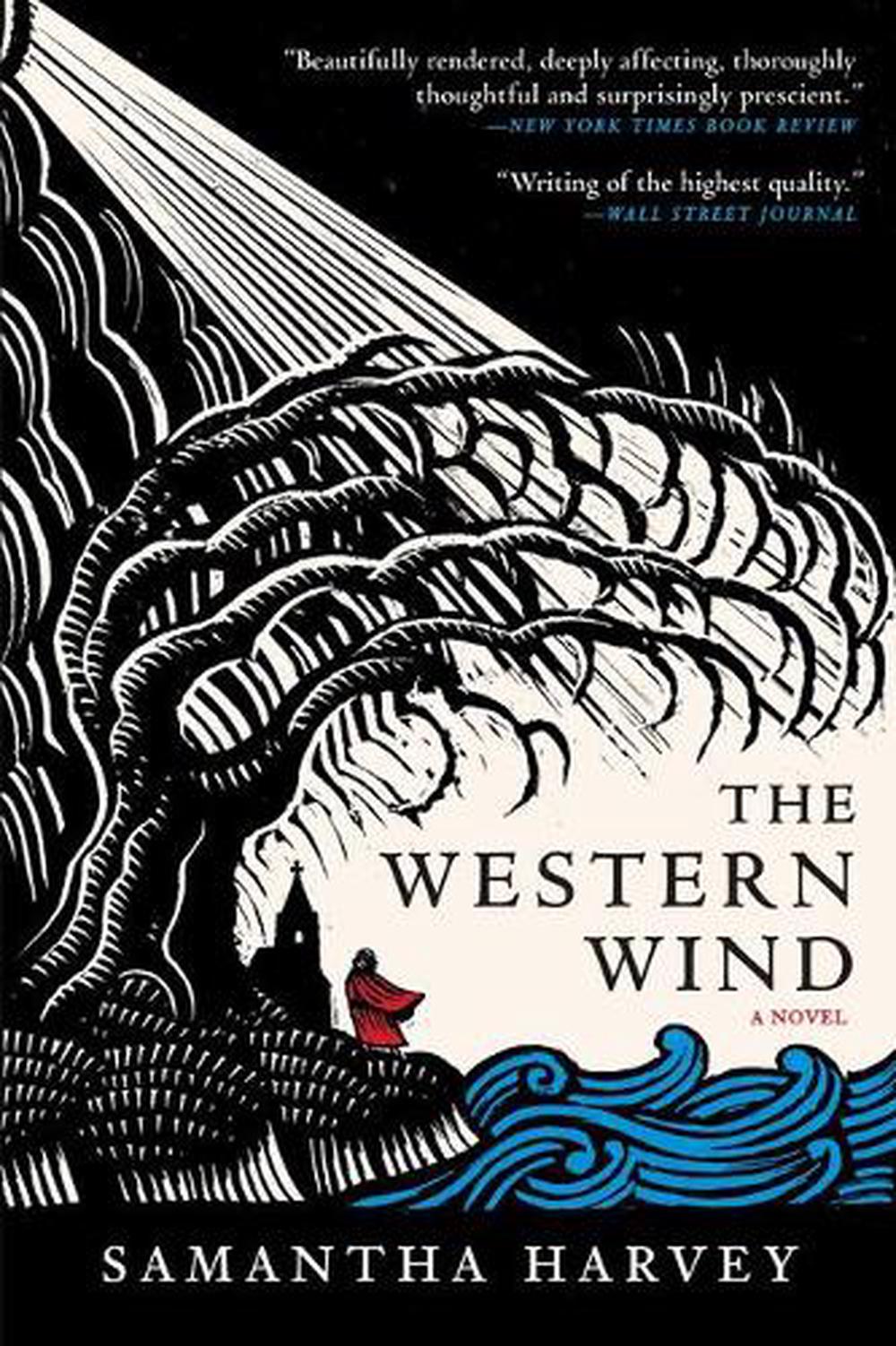 Written with timeless elegance, steeped in the spiritual traditions of the Middle Ages, and brimming with propulsive suspense, Harvey's medieval mystery, told in reverse, is a riveting story of faith, guilt, and the freedom of confession.

SAMANTHA HARVEY is the author of three novels, Dear Thief , All Is Song , and The Wilderness , which won the Betty Trask Prize. Her books have been shortlisted for the Orange Prize for Fiction, the Guardian First Book Award, and the James Tait Black Prize, as well as longlisted for the Man Booker Prize and the Baileys Women's Prize. She lives in Bath, UK, and teaches creative writing at Bath Spa University.

Praise for THE WESTERN WIND Winner of the Staunch Book Prize Longlisted for the Walter Scott Prize for Historical Fiction Named One of Waterstones Paperbacks of the Year 2019 "Beautifully rendered, deeply affecting, thoroughly thoughtful and surprisingly prescient . . . Harvey''s is a story of suspense, yes. It is a story of a community crowded with shadows and secrets. But to read this novel is to experience a kind of catharsis. In John Reve, a 15th-century priest at war with his instincts and inclinations and at times even with his own flock, we find a kind of Everyman, and Harvey delivers a singular character at once completely unfamiliar and wholly universal." -- New York Times Book Review "Harvey is an intelligent and audacious writer, able and willing to take creative risks and perform stylistic feats. . . . This is a beautifully written and expertly structured medieval mystery packed with intrigue, drama and shock revelations. "The Western Wind" is no humdrum whodunit.. . . . Harvey plays with unreliable narration, probes memory and airs elusive or inconvenient truths. . . . We navigate the corners of Harvey''s characters, all the while marveling at the intricacy of her puzzle and the seductiveness of her prose." -- Minneapolis Star-Tribune "Ms. Harvey has summoned this remote world with writing of the highest quality, conjuring its pungencies and peculiarities... In this superb novel, time, like guilt, is a murky medium, at once advancing and circling back, and pulling humankind helplessly between its battling currents." -- Wall Street Journal " The Western Wind brings medieval England back to life... By the time we find out how Tom Newman died, we''re less interested in a mystery solved and more intrigued by the fate of a long-gone place, a place that Harvey brings to life from its historical tomb." -- Washington Post " The Western Wind is filled with the rich details of rural medieval life, but the unique structure of the story gives the novel a fresh and modern sensibility. In addition, Oakham''s remoteness and parochial village church is contrasted with the spiritual changes coming to both England and the rest of Europe, bringing to mind contemporary issues such as Brexit and the refugee crisis. Harvey...has written a densely packed historical novel that never seems dusty or precious, relishing in the psychological intricacies of power and faith but still crackling with suspense and intrigue." -- Bookpage "A poignant tale of superstition and guilt... a sublime and heartrending story, perfect for readers who enjoy impeccably chosen language and a penetrating look at the human condition." -- Shelf Awareness "Hardly a page goes by without a wondrous observation... Harvey regularly reminds me of Marilynne Robinson--the highest compliment I can pay any novelist." -- Commonweal Magazine "Harvey weaves a dazzling tapestry around loss and confession in late-15th-century England in this breathtaking novel...The lush period details and acute psychological insight will thrill fans of literary mysteries and historical fiction. Utterly engrossing." -- Publisher''s Weekly (starred review) "Harvey evokes the darkness of both winter and spirit with stark yet lovely imagery... This compulsively readable portrait of doubt and faith reveals, in small lives, humanity''s biggest questions." -- Booklist (starred review) "A medieval whodunnit...the experience [Harvey''s] book engenders is less like reading a novel and more akin to time travel - something I''ve only previously encountered in the work of Hilary Mantel." -- Financial Times "Startling and energizing... The Western Wind must be in the running for one of the year''s best novels." -- The Spectator "It is at once a literary detective story, an awkward confession, a study of a crisis in authority and faith, and a moving portrait of a tight-knit community''s dim awareness of encroaching threat." -- Sunday Times "A rich and sumptuous delight . . . the language manages to be both luminously lyrical and endlessly sharp." -- Telegraph "A medieval mystery from one of the UK''s most exquisite stylists."-- Guardian "My book of the year . . . It is quite unlike anything else I have read . . . Samantha Harvey is not half as well-known as she should be . . . This, her fourth novel, deserves to break her through to a wider audience . . . The truly extraordinary thing about this novel is the way Harvey re-creates the mindset and beliefs of the medieval world, and makes the concerns of 500 years ago vivid and immediate."-- Alice O''Keeffe, The Bookseller "Samantha Harvey''s prose is luminous, a wonderfully lyrical look at the way religious belief and pragmatism battle it out in the heart of a good man." -- Daily Express "Set in the 1400s but never feeling dusty or distant, this astonishing book is at once a rollicking mystery and profound meditation on faith and existence."-- Alex Preston, Guardian (Best Fiction for 2018) "Trumping all the above might be Samantha Harvey, whose relative anonymity should end if her next novel, The Western Wind , does as well as it deserves . . . A murder mystery, an acute dissection of class and money, and fabulously written."-- James Kidd, Post Magazine, South China Morning Post (Must-Read Books in 2018) " The Western Wind is an extraordinary, wise, wild and beautiful book--a thrilling mystery story and a lyrical enquiry into ideas of certainty and belief. Surprising, richly imagined, gloriously strange--the best kind of fiction."-- Joanna Kavenna, author of A Field Guide to Reality "Harvey is up there with the best writers working today. Here she makes the medieval world feel as relevant and pressing as tomorrow morning because--as always--she captures the immutable stuff of the human condition."-- Nathan Filer, author of The Shock of the Fall

Dust and ashes though I am, I sleep the sleep of angels. Most nights nothing wakes me, not til I'm ready. But my sleep was ragged that night and pierced in the morning by someone calling to me in fear. A voice hissing, urgent, through the grille, "Father, are you in there?" "Carter?" Even in a grog, I knew this voice well. "What's the matter?" "A drowned man in the river. Down at West Fields. I--I was down at the river to see about clearing a tree that's fallen across it. A man there in the water, pushed up against the tree like a rag, Father." "Is he dead?" "Dead as anything I've ever seen." I'd slept that night on the low stool of the confession booth with my cheek against the oak. A troubled night's sleep, very far from the angels. Now I stood and pushed my skirts as flat as they'd go. Outside looked dark; it could have been any time of night or early morning, and my hands and feet were rigid with cold.

The Western Wind has been singled out by the Guardian in a preview of "best fiction in 2018" and the books editor at The Bookseller chose it as her book of the year, the book that deserves to break out Harvey to a wider audience Harvey has been praised by Michael Cunningham, Tessa Hadley, and AM Holmes; James Wood raved about Dear Thief in the New Yorker , where he called Harvey's prose "luminous" and "rich but always lucid" and said that he "was at moments reminded of Marilynne Robinson" Dear Thief was shortlisted for the James Tait Black Prize and longlisted for the Bailey's Prize for Women's Fiction Harvey's 2009 debut The Wilderness won the Betty Trask Prize; it was shortlisted for the Orange Prize, the Guardian First Book Award, and longlisted for the Man Booker Prize Harvey has a postgraduate degree in philosophy and her insightful, contemplative approach to story has earned her comparisons to Virginia Woolf, Marilynne Robinson, WG Sebald, Claire Messud, John Banville, and Joseph O'Neill The Western Wind is both a propulsive medieval mystery and a meditation on faith and existence that will appeal to readers of Eleanor Catton, Sarah Waters, and Donna Tartt Set in 1491, the year Henry VIII was born, Harvey places the plot in the run-up to Lent, and tells it through the voice of a village priest and confessor; the novel subtly foreshadows the events of the English Reformation, which would take place approximately within the next four decades Harvey teaches creative writing at Bath Spa University in the UK; she was a member of the jury for the 2016 Giller Prize Her stories have appeared in Granta and on BBC Radio4