LAW101 - Law in Context University of New England
LAWS1111 - Legal Systems University of Western Australia
Use our Textbook Finder to find the rest of your Textbooks!
PUBLISHED: 8th March 2012
ISBN: 9781862878426 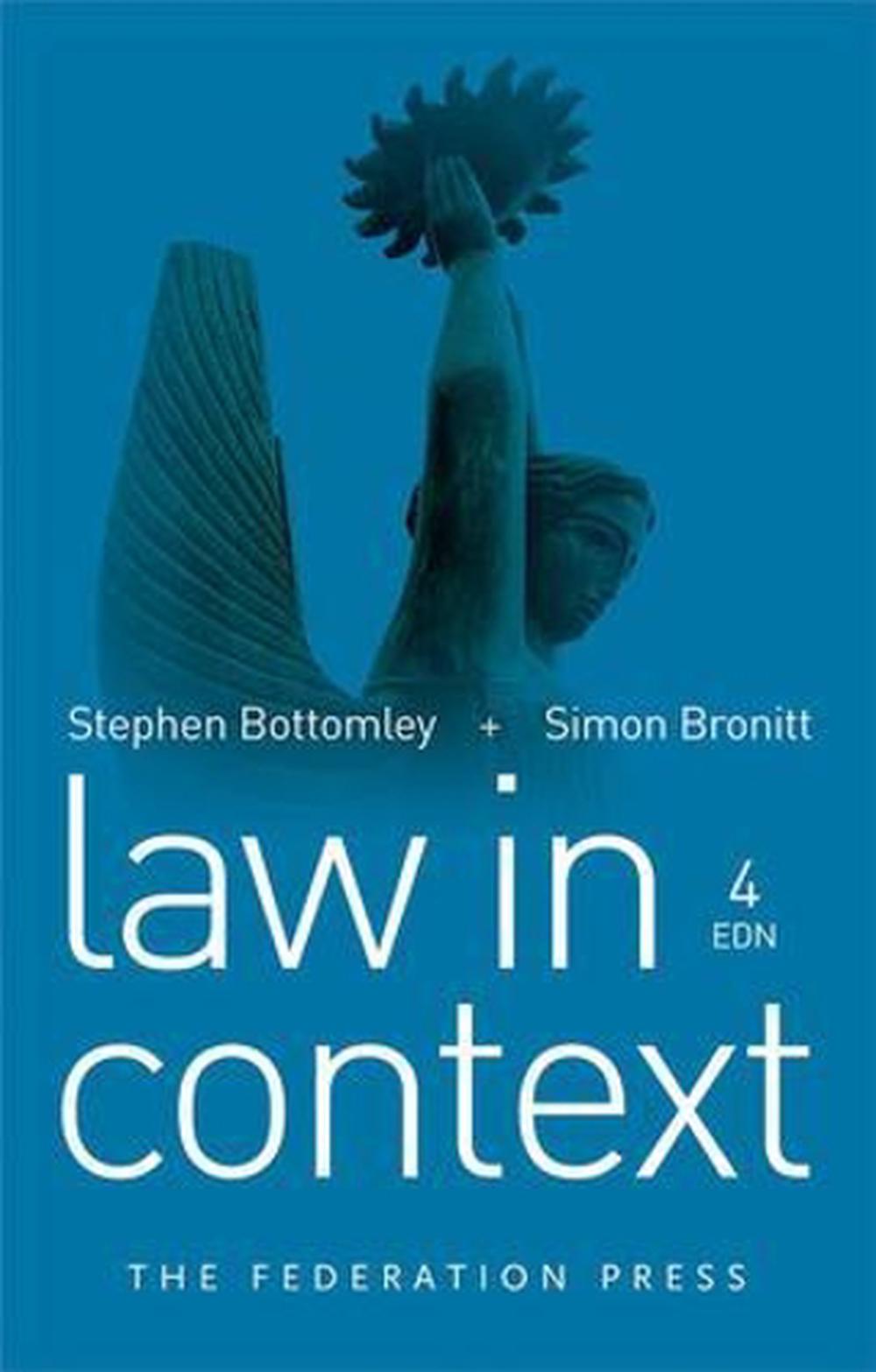 LAW101 - Law in Context University of New England
LAWS1111 - Legal Systems University of Western Australia
Use our Textbook Finder to find the rest of your Textbooks!
OTHER FORMATS:
PUBLISHED: 8th March 2012
ISBN: 9781862878426

Law in Context critically examines the foundations of the Australian legal system and the various contexts within which the law operates and develops.

Cover photograph: Ethos before LawCourtesy and Copyright of the Photographer: Werner PadarinSculpture of Ethos by Tom Bass This fourth edition of Law in Context not only updates the text by reference to the latest thinking and developments in the broad area of `law in context', but also introduces readers to the wider social, political and regulatory contexts of law. Bottomley and Bronitt, as in previous editions, expose readers to the multitude of contexts (some explicit, others implicit) that affect how law is made, broken and enforced by the state or individual citizens. The fundamental ideals of law - such as the Rule of Law - rest on cherished liberal values, though the authors constantly encourage readers not to accept uncritically the rhetoric of law, but to test these assumptions through empirical eyes. This contextual and critical approach to law, laid out in Chapter 1 and 2, is further developed through specific studies of Gender and Race. Complementing these substantive critiques of law, later chapters examine some of the institutional limitation of law and justice through chapters on access to justice, the law-making process, and regulation. The final chapter, which serves as an epilogue, looks to the broader challenges for law in an age of globalisation through case studies on terrorism and global business regulation.

Stephen Bottomley is Professor of Commercial Law in the ANU College of Law at The Australian National University. His research interest is corporate law, particularly governance and accountability in the private and public sectors. Stephen is the co-author of Corporations Law in Australia (2002, 2nd edn), Law in Context (2011, 4th edn), Directing the Top 500 - Corporate Governance and Accountability in Australian Companies (1993), and The Constitutional Corporation: Rethinking Corporate Governance (2007), which was awarded the 2008 Hart Socio-Legal Book Prize for the most outstanding piece of socio-legal scholarship. He is also co-editor of Commercial Law and Human Rights (2002). Simon Bronitt is Director of CEPS. Simon was previously a Professor of Law in the ANU College of Law and Associate Director of the Australian Centre for Military Law and Justice, ANU. Between 2006-2009 he served as the Director of the ANU Centre of European Studies in the Research School of Humanities. Drawing on comparative and interdisciplinary perspectives, Simon has published widely on criminal justice issues, including counter terrorism law and human rights, covert policing, telecommunications interception and international criminal law. His other publications include Principles of Criminal Law (3rd ed, Thomson Reuters 2010). He was the lead Chief Investigator of ARC-funded Discovery Project on counter-terrorism law (2005-2008), which culminated in the publication of Miriam Gani & Penelope Mathew (editors), Fresh Perspectives on the War on Terror (2008). For more details see html

Reviews of previous editions:Law in Context is easy to read and represents a wonderful teaching tool for universities attempting to encourage more critical and socially aware law graduates. Apart from use by students, the book is a helpful first reference for anyone who has an interest in the philosophy and values that underpin the legal system in this society. - Law Institute Journal (Victoria), October 2005 This is a stimulating book which challenges the reader to consider the law beyond its "black letter" operation. It demonstrates how law develops "in context". The first section detals with law in a political context, the second with the processes of law and the final section with law and regulation. The authors sometimes pose the question of whether a societal problem requires a legal solution. More often they look at the influences on the lawmaker and whether the law as introduced operates in a just way according to the liberal tenets of the authors. - Law Letter (Journal of the Law Society of Tasmania), Winter 2007 The book's goal is to introduce first year law students to the assumptions, arguments and limitations of every theory from Chicago School economics to cultural feminism, all the while tying each concept back to the student's (generally minimal) prior study of law. Given the enormity of the task, the authors have been astonishingly successful. Readers are offered a myriad of ways to conceptualise, contextualise and criticise the system in which we all operate, and the information in this text is an invaluable part of any undergraduate law curriculum. The chapter on Gender is outstanding, as is Formalism and the Rule of Law. Memorable extracts are used throughout to explain complex theories and to illustrate the unintended consequences of the law in a way that only real-world examples can. - Ethos (Law Society of the ACT), Summer 2006 Life is full of dilemmas, tensions, and competing guideposts. 'Look before you leap,' clamours one proverb; 'he who hesitates is lost,' responds another. The antinomy is not trivial. Like law in isolation versus law in context, or law as a profession versus law as an intellectual discipline, neither guidepost can tell the whole story. Neither is true; yet both are true. Ultimately, we must exercise judgment and choose that which is appropriate in the circumstances. This excellent book will help you make that choice. It will give you many ways to think about law - many ways to conceptualise it, contextualise it, and criticise it. The authors are ... not afraid to express a point of view. Yet, if you take the real message of this book, you will not necessarily agree with them. You will apply your own mind to the issues. You will expose their predilections and challenge their points of view. You will begin to supply your own answer to the question, 'what is law?' - Professor Michael Coper, Dean & Robert Garran Professor of Law, The Australian National University

Reviews of previous editions:Law in Context is easy to read and represents a wonderful teaching tool for universities attempting to encourage more critical and socially aware law graduates. Apart from use by students, the book is a helpful first reference for anyone who has an interest in the philosophy and values that underpin the legal system in this society. - Law Institute Journal (Victoria), October 2005