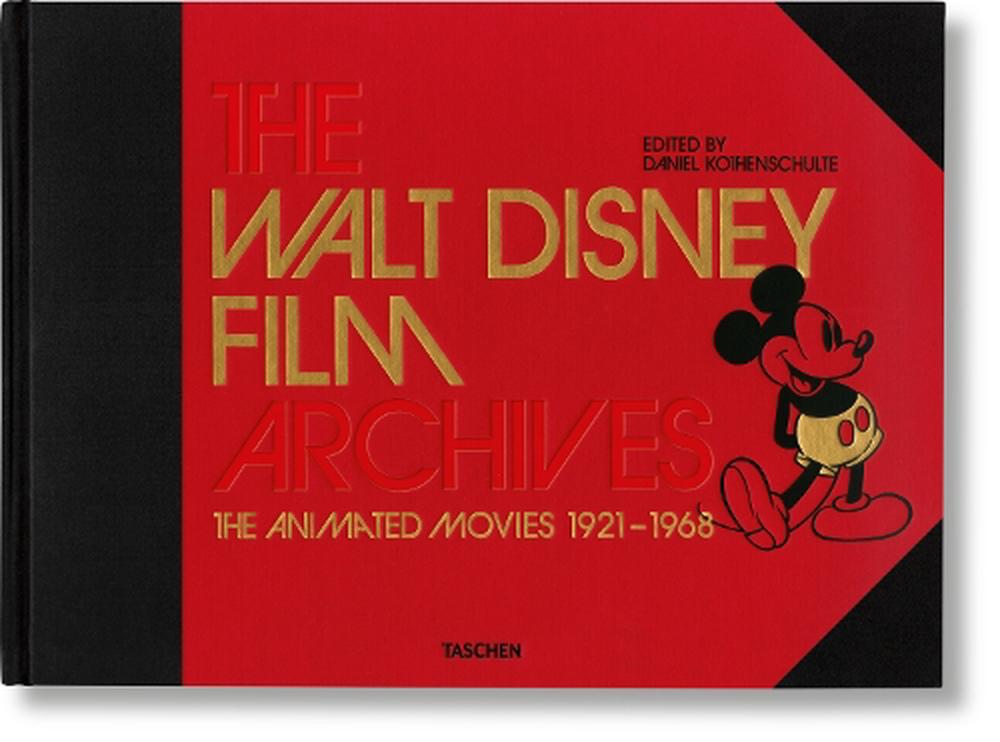 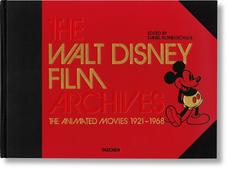 ISBN: 9783836552912
ANNOTATION:
In TASCHEN's first volume of one of the most expansive illustrated publications on Disney animation, 1,500 images take us to the beating heart of the studio's "Golden Age of Animation." The landmark volume includes behind-the-scenes photos, story sketches, and cel setups of famous film scenes. It spans each of the major animated features made...
SAVE
$51
RRP $299.99
$249.00
Or pay later with

In TASCHEN's first volume of one of the most expansive illustrated publications on Disney animation, 1,500 images take us to the beating heart of the studio's "Golden Age of Animation." The landmark volume includes behind-the-scenes photos, story sketches, and cel setups of famous film scenes. It spans each of the major animated features made...

The Master Magician A fantastic voyage through Walt Disney's animation works "It's kind of fun to do the impossible." -Walt Disney One of the most creative minds of the 20th century, Walt Disney created a unique and unrivaled imaginative universe. Like scarcely any other classics of cinema, his astonishing collection of animated cartoons revolutionized storytelling on screen and enchant to this day across geographies and generations. In TASCHEN's first volume of one of the most expansive illustrated publications on Disney animation, some 1,500 images and essays by eminent Disney experts take us to the beating heart of the studio's "Golden Age of Animation." This landmark book traces Disney's complete animation journey from the silent film era, through his first full-length feature Snow White and the Seven Dwarfs (1937) and the pioneering artistic experiment Fantasia (1940), right up to his last masterpieces Winnie the Pooh and the Honey Tree (1966) and The Jungle Book (1967). With extensive research conducted through the historical collections of The Walt Disney Company, as well as private collections, editor Daniel Kothenschulte curates some of the most precious concept paintings and storyboards to reveal just how these animation masterpieces came to life. Masterful cel setups provide highly detailed illustrations of famous film scenes while rare pictures taken by Disney photographers and excerpts from story conferences between Walt and his staff bring a privileged insider's view to the studio's creative process. Each of the major animated features that were made during Walt's lifetime-including Pinocchio, Fantasia, Dumbo, Bambi, Cinderella, Peter Pan, Lady and the Tramp, and One Hundred and One Dalmatians-are given their own focus chapter, without forgetting less familiar gems such as the experimental short films of the Silly Symphonies series and underappreciated episodic musical films such as Make Mine Music and Melody Time, all of which receive the same meticulous research and attention. Many unfinished projects, among them the proposed sequels to the legendary musical Fantasia or a homage to Davy Crockett by painter Thomas Hart Benton, are also highlighted with rarely seen artworks, many of them previously unpublished. Throughout, the contributions from such leading Disney specialists as Leonard Maltin, Dave Smith, Charles Solomon, J. B. Kaufman, Russell Merritt, and Brian Sibley detail the evolution of each respective film. Realizing the Disney style was a collective project and as much as the master himself, The Walt Disney Film Archives acknowledges the outstanding animators and designers who influenced the style of the studio, among them Albert Hurter, Gustaf Tenggren, Kay Nielsen, Carl Barks, Mary Blair, Sylvia Holland, Tyrus Wong, Ken Anderson, Eyvind Earle, and Walt Peregoy. First volume of one of the most expansive illustrated publications on Walt Disney. Produced with the assistance of the Walt Disney Archives and Disney's famous Animation Research Library. Covers the Walt Disney journey from the era of silent films through to his final masterpiece The Jungle Book (1967). Includes the first full-length feature Snow White and the Seven Dwarfs (1937), the landmark artistic experiment Fantasia (1940), and beloved post-war classics such as Cinderella (1950) and Peter Pan (1953). 1,500 illustrations and essays by eminent Disney experts. Masterful cel setups provide highly detailed illustrations of famous film scenes. Remarkable behind-the-scenes insight with excerpts from story conferences with Walt and his staff and rare pictures taken by Disney studio photographers.Copyright (c) 2016 by Disney Enterprises, Inc.

Daniel Kothenschulte is an author, curator, and lecturer on film and art history, and a lover of animation since he first saw The Jungle Book at the age of three. As a film journalist, he is responsible for the film section in the German national daily newspaper Frankfurter Rundschau and a regular contributor to WDR Television. He has taught at various universities, including Stadelschule in Frankfurt; the University of Applied Sciences and Arts, Dortmund; and the University of Television and Film Munich. He is the author of Hollywood in the '30s and The Art of Pop Video, as well as books about Robert Redford, Fritz Lang's Metropolis, and artist Mike Kelley. In addition, he provides accompanying music to silent films on the piano. Academy Award-winning filmmaker John Lasseter maintains creative oversight of all films and associated projects from Walt Disney and Pixar Animation Studios. Lasseter made his directorial debut in 1995 with Toy Story, the world's first feature-length computer-animated film. He subsequently went on to direct A Bug's Life, Toy Story 2, Cars, and Cars 2. Lasseter has executive produced all of Pixar's films since 2001, including the 2015 release of Inside Out and Finding Dory in 2016, and has executive produced all of Walt Disney Animation Studios' films since 2006, including its most recent releases Big Hero 6 and Zootopia. He is currently directing Toy Story 4. Russell Merritt teaches in the Film and Media Department at the University of California, Berkeley. He has taught and lectured internationally on Disney, animation, silent film, and art house cinema. Together with J. B. Kaufman, he cowrote the award-winning Walt in Wonderland: The Silent Films of Walt Disney and Walt Disney's Silly Symphonies: A Companion to the Classic Cartoon Series. Merritt was senior advisor on D. W. Griffith: Father of Film, a three-part series produced for American Masters, which was nominated for an Emmy Award, and has also produced The Great Nickelodeon Show. An internationally respected animation critic and historian, Charles Solomon has written for The New York Times, Newsweek (Japan), Los Angeles Times, International Herald Tribune, Variety, Telerama, and National Public Radio and is the author of 17 books on animation, including Once Upon a Dream: From Perrault's Sleeping Beauty to Disney's Maleficent and Enchanted Drawings: The History of Animation, which was a New York Times Notable Book of the Year and the first film book nominated for a National Book Critics Circle Award. In 2008, Solomon received the LA Press Club Award for radio feature reporting and ASIFA-Hollywood's June Foray Award in 2015. Robin Allan (1934-2014) was the author of the groundbreaking Walt Disney and Europe, the accumulation of 10 years of study on both sides of the Atlantic and the inspiration behind the seminal 2006/07 exhibition Il etait une fois Walt Disney at the Grand Palais, Paris; Musee des beaux-arts de Montreal; and Kunsthalle Munchen. Allan published two children's books and many articles on Disney and lectured on the subject in Britain, North America, France, and Germany. He donated much of his collection and research archives to the Bill Douglas Cinema Museum at Exeter University, England. Didier Ghez runs the Disney History blog (disneybooks.blogspot.com), the Disney Books Network website , and serves as managing editor of the Walt's People book series. He is the author of Disneyland Paris: From Sketch to Reality, Disney's Grand Tour, and They Drew As They Pleased: The Hidden Art of Disney's Golden Age and the editor of other Disney publications including Life in the Mouse House: Memoir of a Disney Story Artist. J. B. Kaufman is an author and film historian who has published and lectured extensively on Disney animation, American silent film history, and related topics. His books include The Fairest One of All: The Making of Walt Disney's Snow White and the Seven Dwarfs, South of the Border with Disney, and Pinocchio: The Making of the Disney Epic. He is also coauthor, with Russell Merritt, of Walt Disney's Silly Symphonies: A Companion to the Classic Cartoon Series and the award-winning Walt in Wonderland: The Silent Films of Walt Disney. In addition, Kaufman has presented programs at festivals, including the TCM Classic Film Festival and San Francisco Silent Film Festival. He holds forth online at jbkaufman.com. Katja Luthge is a Berlin-based film journalist, writer, and curator, specializing in film, comics, and politics. Her work has appeared in the Berliner Zeitung and Die Zeit, among others, and in several exhibitions on comics. Luthge has special expertise in animal characters in comics and animation. Brian Sibley is a writer and broadcaster who has presented and contributed to numerous TV and radio programs about the Mouse and his maker. He has lectured on many aspects of animation, and has made appearances on the "extras" of numerous Disney DVDs. He is also the coauthor of Mary Poppins: Anything Can Happen If You Let It, The Disney Studio Story, Mickey Mouse: His Life and Times, and Snow White and the Seven Dwarfs: The Making of the Classic Film.

"A lavishly packaged tome." "...insightful, exhaustive, and stunningly gorgeous - whether you like cartoons or not." "This thoroughly comprehensive tome should be on the shelf of every film buff." "...one of the most exciting animation book releases of the year."