Hanuman: The Devotion and Power of the Monkey God

ISBN: 9781594773372
ANNOTATION:
Known for his playful nature, amazing physical powers, and selfless devotion, Hanuman is one of the most beloved gods in the Hindu pantheon. This book recounts 36 legendary Hanuman stories revealing that anyone can attain the heights of spiritual evolution through devotion and perseverance. 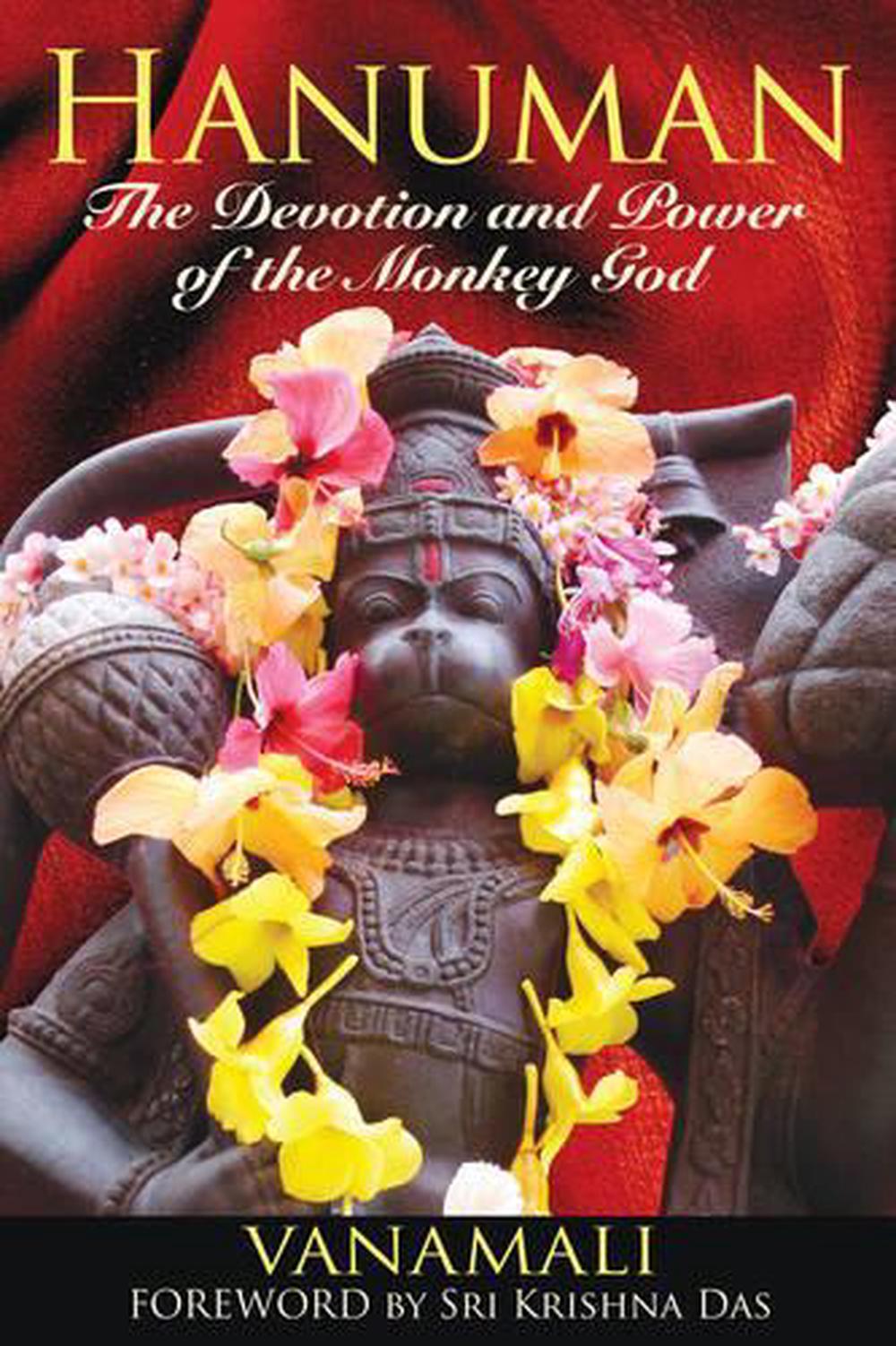 OTHER FORMATS:
ISBN: 9781594773372
ANNOTATION:
Known for his playful nature, amazing physical powers, and selfless devotion, Hanuman is one of the most beloved gods in the Hindu pantheon. This book recounts 36 legendary Hanuman stories revealing that anyone can attain the heights of spiritual evolution through devotion and perseverance.

Known for his playful nature, amazing physical powers, and selfless devotion, Hanuman is one of the most beloved gods in the Hindu pantheon. This book recounts 36 legendary Hanuman stories revealing that anyone can attain the heights of spiritual evolution through devotion and perseverance.

An interpretive look at the stories of Hanuman, one of the most beloved gods of the Hindu pantheon - Contains 36 of the most important Hanuman stories with commentary on spiritual lessons, yogic practices, and Vedic astrology - Reveals how Hanuman symbolizes the human mind and the highest potential it can achieve - Explains how Hanuman has the ability to bestow strength and devotion Best known for his role in the Ramayana, Hanuman's playful nature, amazing physical powers, and selfless devotion to Lord Rama have made him one of the most beloved gods in the Hindu pantheon. As a monkey, he symbolizes the ever-restless human mind. He teaches us that, though everyone is born an animal, anyone can attain the heights of spiritual evolution through perseverance and ardent discipline. Having perfected his mind through bhakti (selfless devotion) to obtain his powers, Hanuman embodies the highest potential we can achieve. In this book, Vanamali recounts 36 legendary Hanuman stories—from his birth to his adventures in the Ramayana—and reveals the spiritual lessons, yogic practices, and Vedic astrology aspects they contain. Vanamali shows how Hanuman has the ability to bestow selfless devotion and strength to his devotees and that following his example is the surest path to attracting the blessing of Rama.

Mataji Devi Vanamali has written seven books on the gods of the Hindu pantheon, including Shakti, The Play of God, and The Song of Rama, as well as translating the Bhagavad Gita. She is the founder and president of Vanamali Gita Yoga Ashram Trust, dedicated to sharing the wisdom of Sanatana Dharma and charitable service to children. She lives at the Vanamali ashram in Rishikesh, in northern India.

Appendix One. Poems on Hanuman

Appendix Three. Names of Other Characters in the Hindu Pantheon

"Beautifully written, engrossing and inspiring, it would be difficult to praise this book too highly."

"With spellbinding luminosity, master storyteller Vanamali propels the reader into transcendental realms of inspiring valor and sublime devotion. With illuminating authenticity, Vanamali, again and again, showers us with the ambrosia of Sri Hanuman's devotion to Lord Rama."

Aum Marutaatmajaaya Namaha! Chapter 5 MARUTI Flight to the Sun Kyatha Sri Rama dhuta, pavanatanubhava, Pingalakshashikhavan, Sitashokapahari Dashamukha vijayi, Lakshmana pranadhata. You are known as the son of the wind and messenger of Rama, With red eyes, Dispeller of the sorrows of Sita and vanquisher of the ten-headed one, And the giver of life to Lakshmana. --Hanuman Stotra Indeed, having both Shiva and Vayu, the wind god, as his illustrious fathers, the monkey Maruti was no ordinary child. He was restless, spirited, energetic, and inquisitive. He was obviously endowed with awesome strength, and the scriptures abound in tales expounding his remarkable feats. One of his most remarkable feats, which is recounted in all his tales, has to do with his jump to the sun. In fact, this amazing achievement is the one that gave him his most popular name--Hanuman. The baby was a voracious eater. His appetite could never be totally appeased. The poor parents did their best to satisfy him, but he was never completely satisfied and was always demanding more food. By the time he was a year old he started climbing and eating all the fruit in the surrounding area. One day his earthly mother, Anjana, took him with her to the river and allowed him to do whatever mischief he wanted on the banks while she had her bath. After having eaten as many fruits and shoots from the trees as he could get, he was still hungry. Suddenly he spied the huge, orange orb of the sun, which was rising in the sky, and thought to himself that this must be an exceptionally big type of fruit. He called out to his mother to come and have a look at this new fruit. She thought that it must be some fruit on a tree and told him to go for it. The child gave a magnificent leap and soared up to the sky, toward the orb of the sun. When Anjana came out of the river after her bath, she couldn''t see her son and looked anxiously for him. At last she spied him flying toward the sun. She shouted to Kesari to come and see what their son was up to. He jumped toward the little fellow to try and catch him but was unable to do so and fell back dejected. The parents didn''t know what they should do now. The celestials watched his progress with wonder. "Neither the wind god nor Garuda or even the mind can move as swiftly as this son of Vayu. If this is his speed as a mere babe what will be his speed when he becomes a youth?" The wind god was also closely following the baby monkey to protect him from the danger of getting scorched. The sun god realized that he was an innocent child. He also knew of the great purpose that Lord Vishnu in his form as Rama would accomplish through him, and thus he did not harm him. Unfortunately that day happened to coincide with the day of the solar eclipse when the planet Rahu was supposed to swallow the sun. Suddenly Maruti saw Rahu (a malefic planet) shaped like a serpent making his way toward the sun in order to devour him. Mistaking him to be a huge worm, the inquisitive monkey dashed toward him and attempted to catch hold of his tail. Rahu fled for his life and sought shelter at the feet of Indra, the lord of the gods. He spoke angrily to Indra, "You have allotted the sun and the moon to me for appeasing my hunger on certain days, and now I find that my share has been given over to some other creature. Today is the night of the new moon, and this is the day on which I have been told to devour the sun. Now look what''s happened! Here comes another creature coming to thwart me." Indra picked up his deadly thunderbolt, mounted his white elephant named Airavata, and went toward the impudent monkey. The clouds rumbled and lightning thundered across the vast skies in an expression of Indra''s wrath. But neither this scary scenario, nor the mighty armed Indra on his high mount, was sufficient to induce even a trace of fear in the heart of the little monkey. On the contrary, the spectacle only added fuel to his excitement. He decided that an elephant was just what he needed as a vehicle and tried to grab it. He caught hold of its trunk and leaped on its back. Taken aback by the sudden appearance of a baby monkey behind his back, Indra was all set to strike him with his thunderbolt. Vayu arrived on the scene at the opportune moment and tried to stop him, but Indra was not to be deterred. "He is only a child! What sort of a god are you that you are prepared to wage war against a small child?" Indra retorted, "He may be a child, but he tried to swallow Surya and catch hold of Rahu, and I merely came to their aid." Vayu did his best to dissuade him, but Indra hit Maruti on the chin with his bolt and left a mark on it forever. Hence Anjana''s child got the name Hanuman. Hanu means "chin" in Sanskrit. However, even Indra''s thunderbolt was unable to kill him, though the impact threw him off the back of the elephant. As the little monkey hurtled through the air unconscious, his father Vayu sprang to his rescue and caught him in midair. Aum Sri Hanumathe Namaha!