Shiva: Stories and Teachings from the "Shiva Mahapurana"

ISBN: 9781620552483
ANNOTATION:
The traditional understanding of Shiva told through stories and teachings from the Shiva Mahapurana. 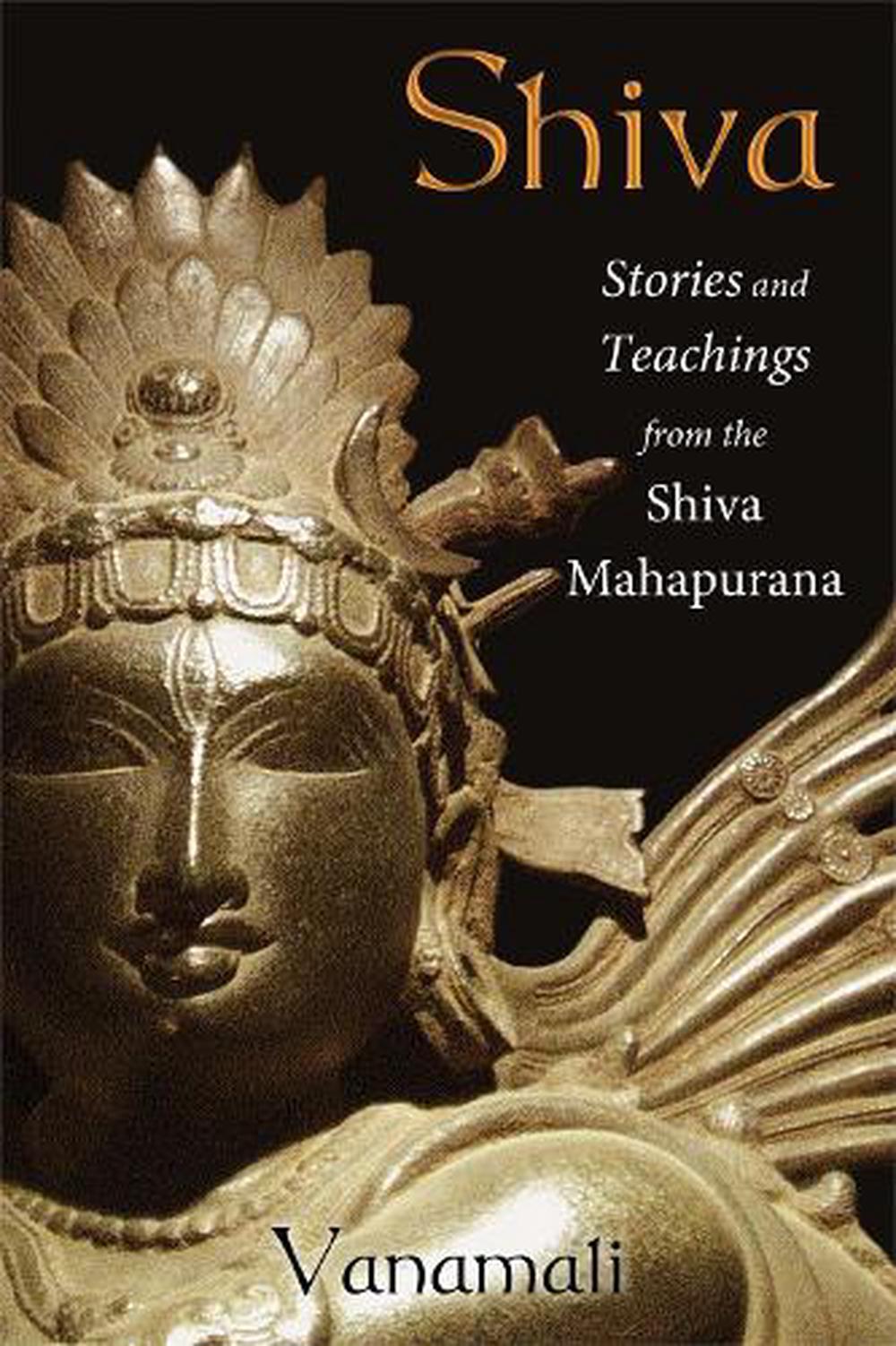 OTHER FORMATS:
ISBN: 9781620552483
ANNOTATION:
The traditional understanding of Shiva told through stories and teachings from the Shiva Mahapurana.

The traditional understanding of Shiva told through stories and teachings from the Shiva Mahapurana.

Mataji Devi Vanamali has written seven books on the gods of the Hindu pantheon, including Hanuman, The Play of God, The Song of Rama, and Shakti, as well as translating the Bhagavad Gita. She is the founder and president of Vanamali Gita Yogashram, dedicated to sharing the wisdom of Sanatana Dharma and charitable service to children. She lives at the Vanamali ashram at Rishikesh in northern India.

Foreword by Swami Dayananda Introduction Part One The Divine Aspects of Shiva 1 The Great Universal God 2 Creation 3 Sandhya, the Evening Star 4 Durga's Promise 5 The Courtship of Sati 6 Sati and Shiva 7 Daksha's Yajna 8 The Wrath of Shiva 9 Parvati Seeks Her Lord 10 The Defeat of Kama 11 Parvati's Penance 12 The Cosmic Wedding 13 The Cosmic Couple 14 Kartikeya Defeats the Demon 15 Ganesha, Remover of Obstacles 16 The Three Demonic Cities 17 Downfall of the Demons 18 Churning the Milky Ocean 19 The Descent of the River Ganga 20 Destroyed by His Own Hand 21 Markandeya and Agniswara 22 The Manifestations of Shiva 23 Shiva, the Beloved 24 The Jyotirlingas Part Two Those Who Worship Shiva 25 Devotees of Shiva 26 The Great Four 27 The Violent Votaries 28 Women Devotees Epilogue Appendix One. Method of Worshipping Lord Shiva Appendix Two. Names of Shiva Appendix Three. Names of Other Characters in the Hindu Pantheon Appendix Four. Alphabetical List of Mantras Appendix Five. Vedic Invocations for World Peace Glossary of Sanskrit Terms Index

"Vanamali's passionate writing blends a grandmother's loving wisdom with a lifetime of devotion to the Sanatana Dharma. Like an ancient vedic chant, Vanamali's spellbinding prose elevates the reader to sublime Himalayan peaks of Transcendental Consciousness. Mataji's erudition and devotion is a portal to a legendary realm of the Gods." Bruce Burger, founder of Heartwood Institute and author of Esoteric Anatomy: The Body as Consciousne "Shiva is a complex Hindu deity. Both destroyer and creator, he is always energetically involved in the world, bringing his special wisdom to us in whatever form we might recognize. Vanamali has gathered together the sacred tales of Shiva's adventures for this book, recounting them with reverence and insight. Customers will begin to see their lives and their potential with greater clarity as they read her carefully crafted words." Retailing Insight, October 2013 "Vanamali's book is seductive, full of the charm of myth retold with sincerity and with a minimum of intellectualization; it should appeal to many school and college collections." Library Journal, November 2013

"Vanamali's passionate writing blends a grandmother's loving wisdom with a lifetime of devotion to the Sanatana Dharma. Like an ancient vedic chant, Vanamali's spellbinding prose elevates the reader to sublime Himalayan peaks of Transcendental Consciousness. Mataji's erudition and devotion is a portal to a legendary realm of the Gods."

Kripaanidaye Namaha! Chapter 22 The Manifestations of Shiva Be attached to Him, who is without attachment. Hold on to that attachment. Then only will you be able to leave other attachments. --Saint Thirvalluvar Normally one does not associate Shiva with incarnations but it is a fact that he has taken many manifestations at the behest of his devotees. We shall now try to describe a few of them. One of the incarnations of Lord Vishnu was the man-lion, Narasimha. After he had killed the demon Hiranyakashipu, it is said that his fury did not abate and the entire world trembled with fear at the fire of destruction emanating from his mouth. The gods approached Shiva and begged him to intervene. So Shiva took on the fierce form called Sharabha. He looked like a gigantic bird with an enormous, curved beak and huge wings. His fangs jutted out and his neck was black. He had powerful arms and four legs and adamantine claws. His three eyes were wide and blazing like the fires of destruction at the end of the world. Like a vulture seizing a serpent, the creature caught hold of the Narasimha in its claws and killed him. Shiva assumed his own form and said, "Just as there is no change in constitution when milk is poured into milk or water into water, so also Vishnu and I are one and it makes no difference whether I kill him or he kills me. In actual fact we are both immortals and neither of us can be killed. It is only our lila . Like actors who don different costumes to amuse the spectators, we play different roles for the sake of our devotees." Another delightful manifestation of Lord Shiva is Kirata, the hunter. The Pandavas and Arjuna in particular, were all devotees of Shiva. Their cousins, the Kauravas, exiled them to the forest. At that time Lord Krishna came to them and advised Arjuna to make the best use of his time in the forest by placating Lord Shiva and asking for his powerful missile, the Pasupata. With this weapon Arjuna would be able to defeat the Kauravas in the battle, which Krishna knew to be inevitable. Thus advised by Krishna, Arjuna went to the mountain called Indrakila, in the Himalayas, near the place called Badrikashrama. While he was meditating with closed eyes and matted locks and subsisting only on leaves and berries, his wicked cousin Duryodana instigated a demon called Muka to go and molest Arjuna and distract him from his tapasya. Muka took the form of a wild boar and charged into the forest. But Lord Shiva never forsakes his devotees. Taking the form of a hunter or Kirata, he went into the forest and chased the boar. Parvati accompanied him in the form of a huntress or Kirati. Hearing the tremendous sounds made by the boar and the hunter, Arjuna opened his eyes and saw the boar rushing into the clearing where he was sitting. Immediately Arjuna strung his bow and shot the beast as it charged toward him. He was seated before a mud linga of Shiva that he had made for his worship. At the same moment, the Kirata also shot the boar. Both arrows found their mark simultaneously. Arjuna went forward to retrieve his arrow. At the same time Shiva in the form of the Kirata, strode out of the thickets into the clearing. Shiva always enjoyed teasing his devotees and Arjuna was especially beloved by him. In an angry voice Shiva said, "Halt! Don''t touch the beast. It''s mine. Shot by my arrow." Arjuna was quite indignant when he heard this and retorted scornfully, "Do you know who I am? I am Arjuna the famous archer. How can you, a mere forest dweller ever hope to equal my prowess in archery? Of course it was my arrow that shot the boar." The heated verbal argument soon led to a fight and they decided to test their prowess with bows. A dreadful battle ensued between the Lord and Arjuna in which Shiva mentally applauded his devotee''s dexterity. But despite all his skill Arjuna was no match for the divine archer. Arjuna was amazed that a low-born tribal could beat him in archery. He did not know what to do and asked for a short respite. This was granted and Arjuna quickly made a garland of wild flowers and adorned the neck of the linga which he had been worshipping faithfully for many months and begged Lord Shiva to save him. Fortified with renewed hope and courage, he turned round to face his opponent and was astonished to see the garland that he had just placed round the linga, adorning the neck of the fake hunter! It was only then that Arjuna understood that it was all the Lord''s play and ran forward to prostrate at the divine hunter''s feet and beg pardon for the great offence he had done in daring to fight with him. Shiva now revealed his true form with Parvati by his side and the ganas frisking around. Arjuna prostrated again and again and begged Shiva to forgive him. Shiva laughingly declared, "It was a great experience to fight with you. I''m proud of your prowess. You may now ask me for any boon you wish." Arjuna was so ashamed that he did not dare to ask for the weapon for which he had been doing tapasya . "All I want is to have devotion to your holy feet all my life," he said. Shiva who could see into his heart insisted that he could ask for anything he wished and it would be granted to him. At last Arjuna asked for Shiva''s weapon, the Pasupata. Lord Shiva spoke, "I shall certainly present you with my own missile, the powerful Pasupata by which you will become invincible. You will be able to defeat your enemies and regain your kingdom." Namashivaya