The Complete Life of Rama: Based on Valmiki's "Ramayana" and the Earliest Oral Traditions

ISBN: 9781620553190
ANNOTATION:
Retells the Ramayana, the ancient Indian tale of love, duty, and sacrifice, for a modern audience. 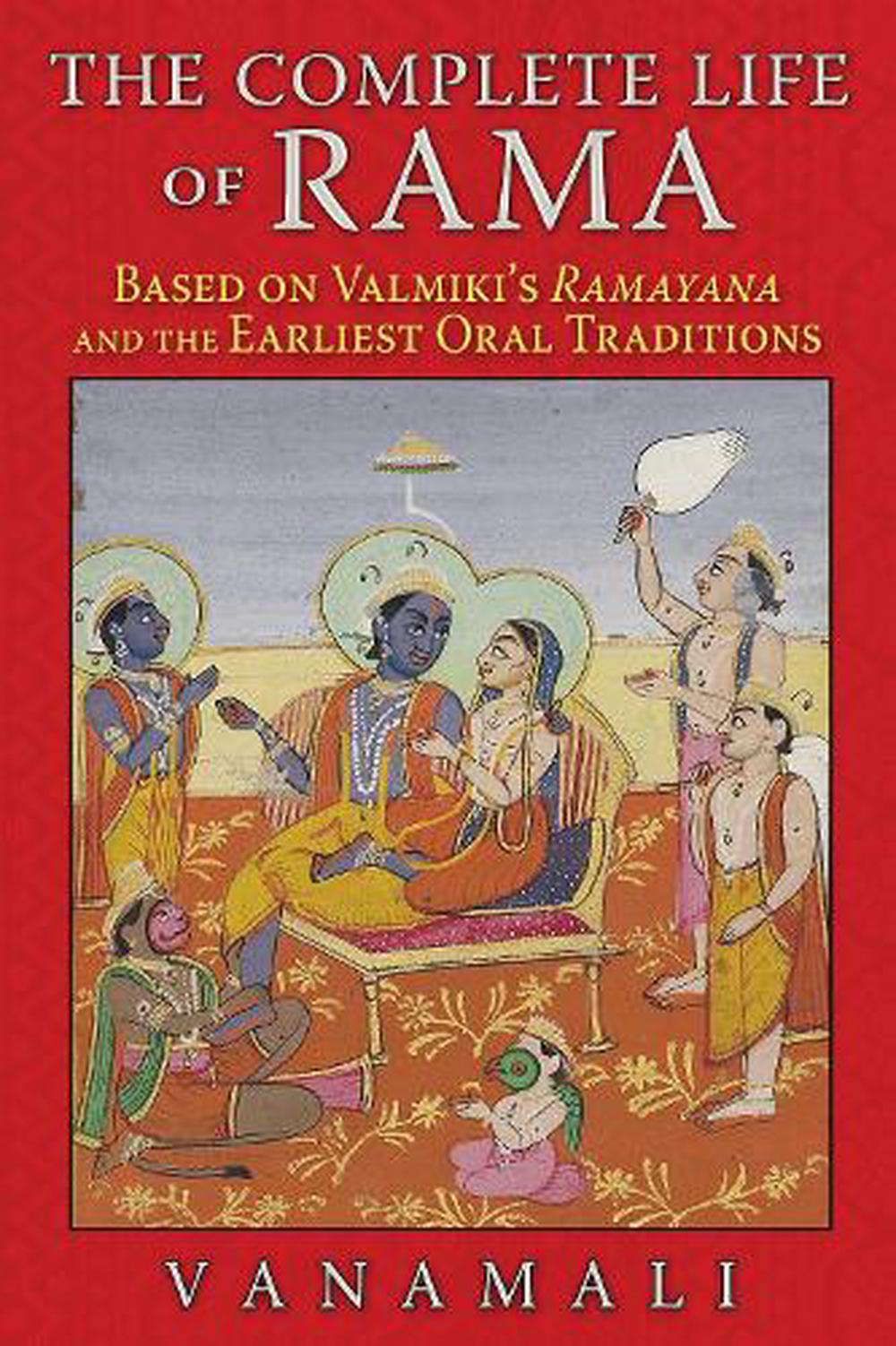 OTHER FORMATS:
ISBN: 9781620553190
ANNOTATION:
Retells the Ramayana, the ancient Indian tale of love, duty, and sacrifice, for a modern audience.

Retells the Ramayana, the ancient Indian tale of love, duty, and sacrifice, for a modern audience.

Retells the Ramayana, the ancient Indian tale of love, duty, and sacrifice, for a modern audience

Drawing on the original Sanskrit words of the great poet Valmiki, enhanced with tales from the oral tradition, Vanamali retells the complete Ramayana, the ancient Indian tale of love, duty, and sacrifice, for a modern audience. Detailing the life and dharma of the seventh incarnation of Vishnu, Lord Ramachandra, she explains how Rama became divine through strict adherence to dharma, the law of cosmic righteousness. Considered one of the greatest love stories of all time, the Ramayana most famously recounts Rama's heroic journey, with the help of his loyal friend the monkey god Hanuman and his devoted brother Lakshmana, to rescue his beloved wife Sita from the demon king Ravana. Rama's battle with the forces of evil provides powerful examples of heroic strength and loyalty, the dangers of spiritual delusion and false attachment, and the power of love, both human and divine.

Capturing the mystical spirit and transcendental wisdom of this immortal story, Vanamali explains how the character of Rama has captivated devotees through the millennia because his story depicts eternal truths that appeal to the best in human nature. She reveals how even though Rama is an avatar of Vishnu, he still possesses many human weaknesses, such as attachments, desires, and anger. His greatness lies in the fact that he rose above these traits, put his spiritual duty above all personal considerations, and perfected himself to become a super human capable of saving those he loved most. Rama's life shows that however weak we may be, each of us is capable of amazing feats through devotion, loyalty, perseverance, and love.

Mataji Devi Vanamali has written 7 books on the gods of the Hindu pantheon, including Shakti, Hanuman, Shiva, and The Complete Life of Krishna, as well as translating the Bhagavad Gita. She is the founder and president of Vanamali Gita Yoga Ashram Trust, dedicated to sharing the wisdom of Sanatana Dharma and charitable service to children. She lives at the Vanamali ashram in Rishikesh, northern India.

Glossary of Names and Places

Janakivallabhaya Namaha! Canto II The Avatara Chandrakantananam bhojam Chandrabimbopamananam Mathamatangagamanam Mathahamsavadhugathim (Rama) had the glory of the moon and (Sita) its beauty. Rama had the gait of an elephant and Sita of a swan. Long, long ago in the beautiful land of Kosala on the banks of the river Sarayu was situated the magnificent town of Ayodhya, ruled by the wise and just king Dasaratha. Dasaratha had one sorrow: that he had no son to carry on his line. His guru, Vasishta, exhorted him to perform the ashvamedha yajna (horse sacrifice ritual) and the putrakameshti yajna for begetting a son and to approach the sage Rishyasringa and ask him to be the chief priest in conducting the yajnas . It was at this time the gods approached the creator Brahma and begged him to intercede with Lord Vishnu on their behalf to kill the demon king, Ravana, who was harassing them sorely. Lord Vishnu agreed to descend to the earth, taking on four forms, as the sons of Dasaratha. At that very moment, Dasaratha had successfully completed his yajnas . In the course of time Dasaratha''s three wives gave birth to four sons, each of whom manifested the power of the Lord Narayana. The first was Rama, born of the eldest wife, Kausalya. He contained one half of the power of the Lord. Next, Kaikeyi, the youngest queen, gave birth to Bharata, who possessed a quarter of the Lord''s powers. And finally the second wife, Sumitra, delivered twins Lakshmana and Shatrugna, who each contained an eighth of the Lord''s power. The king''s joy knew no bounds. In place of the one son he had wished for, he had been given four. As the children grew they received the training necessary for royal princes. Their guru was the great sage Vasishta. Even as a child Rama exhibited extraordinary powers of intellect and great nobility of character. When he was a young man Rama was desirous of going on a pilgrimage around this holy land of Bharathavarsha. Dasaratha was pleased to grant his request, and the four brothers went. After their return, Rama''s father and brothers noticed a great change in him. He became very pensive, took no delight in the various sports and pastimes of his brothers, shunned all social contacts, and often refused to eat. He became pale and emaciated. At this time it happened that the sage Vishvamitra came to the court with a request. The king assured the sage his wish would be granted. Vishvamitra asked Dasaratha to send his son Rama to kill the two demons Maricha and Subahu, who were marauding his ashrama . The king feared for the safety of his son who was barely sixteen years of age. He offered to send his entire army to help the sage or even to come himself, but the sage refused all these offers. He said that Rama alone had the power to kill the demons. At last, urged by his own guru Vasishta, Dasaratha reluctantly consented and ordered an attendant to fetch Rama. The attendant returned, saying that ever since Rama''s return from the pilgrimage he was strangely lethargic, seemed bereft of hope and desire, and attached to nothing. Hearing this Vishvamitra said, "His condition in not the result of delusion but is the result of wisdom and dispassion, leading to enlightenment. Let him be brought to the court." Rama came to the assembly hall and bowed to his father and the sages. His loving father asked him, "My dear child, why are you so sad and dejected when you have everything in life?" Rama replied, "During my recent pilgrimage through this holy land of ours, I saw many sights I had never seen before--agony and suffering, and poverty, disease, and death. A new trend of thought has taken hold of me. What happiness can we have from this everchanging world? All beings take birth only to die, and die only to be born again. I see no meaning in this transient phenomenon that has its roots in suffering and ignorance. We are not bonded slaves, yet we have no freedom. Ignorant of the world, we have been wandering aimlessly in this forest of samsara for many lives. How can this suffering come to an end? My heart bleeds with sorrow when I think of these things and I do not feel like eating or sleeping, much less engaging myself in vain pursuits, unless I have an answer to these questions." He went on for some time and at last said, "I do not consider someone to be a hero who is able to battle against an army. I regard him a hero who is able to conquer his mind. By reflecting on the pitiable state of living beings, I am filled with grief. My mind is confused. I have rejected everything, but I am not yet established in wisdom. Hence I am partly caught and partly freed, like a tree that has been cut, but not severed from its roots. Pray tell me how I am to reach that supreme state of bliss?" All the assembled sages and people were thrilled to hear Rama''s speech and settled themselves down to hear the replies of the sages. Vishvamitra said, "O Rama, you are indeed foremost among the wise. However, your knowledge needs confirmation. I earnestly request sage Vasishta to instruct you so all of us who are assembled here may also be inspired. Vasishta is truly liberated. He is not swayed by sensual pleasures and acts without motivation of fame or any other incentives." The great Brahmarishi Vasishta proceeded to instruct Rama on Atmic knowledge and Brahmic bliss. This was how Rama at the tender age of sixteen became a truly liberated being, steadfast in his quest of dharma, caring not for the pursuit of personal happiness but only for the pursuit of righteousness, for he realized that only in dharma could a person find eternal bliss.