ISBN: 9780008214548
ANNOTATION:
Stunning three-volume slipcased set containing the most comprehensive in-depth companion to Tolkien's life and works ever published, including synopses of all his writings, and a Tolkien gazetteer, who's who and chronology. 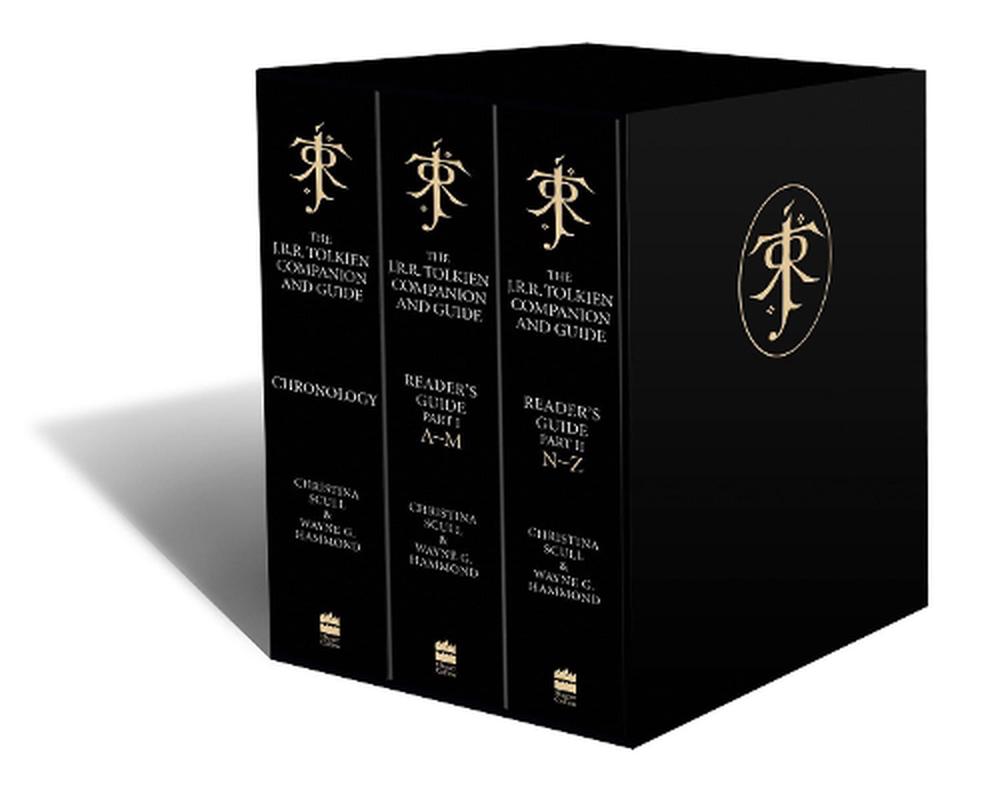 OTHER FORMATS:
ISBN: 9780008214548
ANNOTATION:
Stunning three-volume slipcased set containing the most comprehensive in-depth companion to Tolkien's life and works ever published, including synopses of all his writings, and a Tolkien gazetteer, who's who and chronology.

Stunning three-volume slipcased set containing the most comprehensive in-depth companion to Tolkien's life and works ever published, including synopses of all his writings, and a Tolkien gazetteer, who's who and chronology.

Stunning three-volume slipcased set containing the most comprehensive in-depth companion to Tolkien's life and works ever published, including synopses of all his writings, and a Tolkien gazetteer, who's who and chronology.

The three volumes contained in this slipcase, written by two of the foremost experts on J.R.R. Tolkien, comprise the definitive handbook to one of the most popular authors of the 20th century. Tolkien's progress is traced from his birth in South Africa in 1892, to the battlefields of France and the lecture-halls of Leeds and Oxford, to his success as the author of The Hobbit and The Lord of the Rings, until his death in 1973. His many academic and literary achievements, his public reception, and his enduring fame are examined in detail.

The first volume in this set is a Chronology of Tolkien's life and works, the most extensive biographical resource about him ever published. Thousands of details have been drawn from letters, contemporary documents in libraries and archives, and a wide variety of other published and unpublished sources. Assembled together, they form a portrait of Tolkien in all his aspects: the distinguished scholar of Old and Middle English, the capable teacher and administrator, the devoted husband and father, the brilliant creator of Middle-earth.

The second and third volumes, the Reader's Guide, is an indispensable introduction to Tolkien's life, writings, and art. It includes histories and discussions of his works; analyses of the components of his vast 'Silmarillion' mythology; brief biographies of persons important in his life; accounts of places he knew; essays on topics such as Tolkien's interests and attitudes towards contemporary issues, ideas found in his works, adaptations, and invented languages; and checklists of his published works, his poetry, his pictorial art, and translations of his writing.

Wayne G. Hammond is a librarian at the Chapin Library of Rare Books at Williams College, Massachusetts. He is the author of The Graphic Art of C.B. Falls' (1892),J.R.R. Tolkien: A Descriptive Bibliography' (1993), and regular notes on Tolkien in the journal Mythlore'. Christina Scull is the former librarian of Sir John Soane's Museum, London. She is the author ofThe Soane Hogarths' (1991), edits the journal `The Tolkien Collector', and frequently writes and speaks about Tolkien.