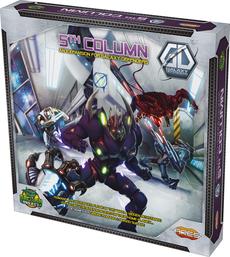 Expand the Galaxy Defenders Agency's army with these new powerful agents and unleash their unique new classes, powers, and items against the alien invasion!

one Archon - members of an alien race struggling desperately against the invaders, Archon soldiers can influence the course of the battle using psionic powers and alien weapons.

one Knight - originally just' a clone with extraordinary abilities, the Agency has chosen him as a new recruit. The Knight can be played as a Support class agent, equipped with multiple devises and capable of moving quickly where he is most needed. Alternatively, as a Guardian class agent, he acts like a mobile defence unit, capable of intercepting attacks directed at his teammates and "controlling aliens.

two Bio Power Armor - These incredible weapon platforms are living beings that become symbiotic with their Agent-host, turning him into a veritable war machine, with powerful defence and awesome attacks.

Fifth Column may be used to replace the agents in any Galaxy Defenders mission (Core Set, Operation Strikeback, Extinction Protocol) to enhance your game experience.