A Light in the Darkness

PUBLISHED: 4th September 2019
ISBN: 9781524701208
ANNOTATION:
"From National Book Award finalist Albert Marrin comes the ... story of Janusz Korczak, the heroic Polish Jewish doctor who devoted his life to children, perishing with them in the Holocaust"--Provided by publisher. 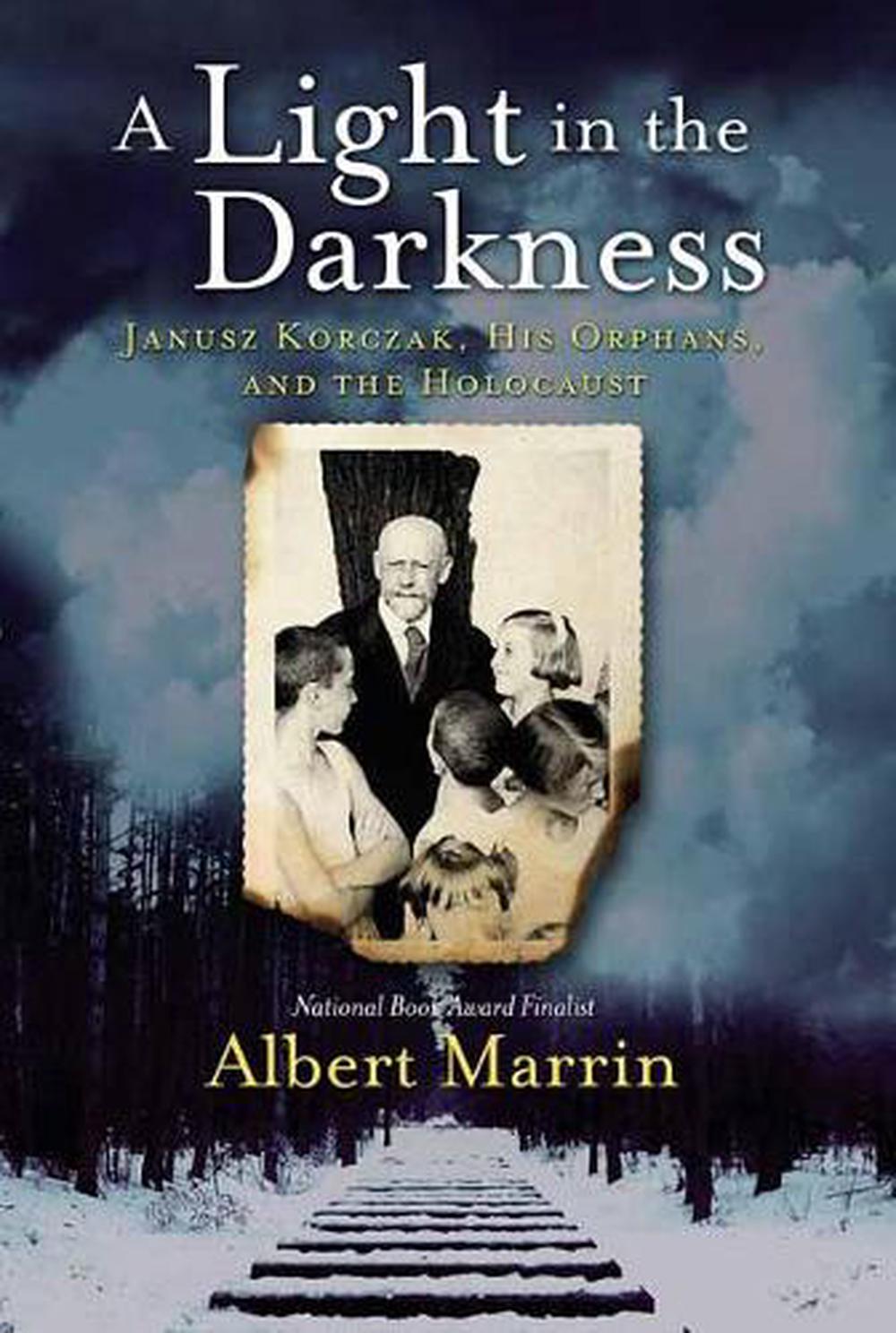 OTHER FORMATS:
PUBLISHED: 4th September 2019
ISBN: 9781524701208
ANNOTATION:
"From National Book Award finalist Albert Marrin comes the ... story of Janusz Korczak, the heroic Polish Jewish doctor who devoted his life to children, perishing with them in the Holocaust"--Provided by publisher.

"From National Book Award finalist Albert Marrin comes the ... story of Janusz Korczak, the heroic Polish Jewish doctor who devoted his life to children, perishing with them in the Holocaust"--Provided by publisher.

Janusz Korczak was more than a good doctor. He was a hero. The Dr. Spock of his day, he established orphanages run on his principle of honoring children and shared his ideas with the public in books and on the radio. He famously said that "children are not the people of tomorrow, but people today." Korczak was a man ahead of his time, whose work ultimately became the basis for the U.N. Declaration of the Rights of the Child.

Korczak was also a Polish Jew on the eve of World War II. He turned down multiple opportunities for escape, standing by the children in his orphanage as they became confined to the Warsaw Ghetto. Dressing them in their Sabbath finest, he led their march to the trains and ultimately perished with his children in Treblinka.

And throughout, Marrin draws readers into the Warsaw Ghetto. What it was like. How it was run. How Jews within and Poles without responded. Who worked to save lives and who tried to enrich themselves on other people's suffering. And how one man came to represent the conscience and the soul of humanity.

Filled with black-and-white photographs, this is an unforgettable portrait of a man whose compassion in even the darkest hours reminds us what is possible.

Albert Marrin is a beloved author of numerous works of nonfiction for young readers. His books include Flesh & Blood So Cheap, which was a National Book Award Finalist, and Uprooted, a Siebert Honor Book.

"It's a harrowing book, complete with harrowing photographs, that's insightful about connections to other historical events without losing sight of its main topic; its emphasis on youth experience, both in Korczak's orphanage and elsewhere, adds a dimension often undertreated in other explorations of the topic." --Bulletin

YALSA Excellence In Nonfiction Award Winner "Painful yet profound." - Booklist, Starred Review "It's a harrowing book, complete with harrowing photographs, that's insightful about connections to other historical events without losing sight of its main topic; its emphasis on youth experience, both in Korczak's orphanage and elsewhere, adds a dimension often undertreated in other explorations of the topic." -- Bulletin

From National Book Award Finalist Albert Marrin comes the moving story of Janusz Korczak, the heroic Polish Jewish doctor who devoted his life to children, perishing with them in the Holocaust.

I exist not to be loved and admired, but to love and act. It is not the duty of those around me to love me. Rather, it is my duty to be concerned about the world, about man. --Janusz Korczak, The Ghetto Years (1942) Starting Out We have little information about Henryk Goldszmit''s life story. Except for his diary, written in the three months before his death, all his personal papers were lost or destroyed during World War II. Much of what we know was recorded by friends and acquaintances, recalling what he had told them, or appears in his letters to them. Even the exact date of his birth is uncertain. This we do know: The future champion of children''s rights was born in Warsaw in July 1878 or 1879--probably 1878. The uncertainty is due to his father''s failure to register his son''s birth, as required by law, for several years. At the time of Henryk''s birth, Poland was not an independent nation. In 1795, aggressive neighbors had banded together to overrun the country. Russia, Austria, and the German state of Prussia divided Poland among themselves. Russia took the lion''s share and declared Warsaw the capital of "Russian Poland." By falsifying his birthday, Henryk''s father may have hoped to postpone, or even avoid, his son''s being drafted into the army of the Russian czar. Other parents scrimped and saved to send their draft-age sons to America.1 Of Henryk''s ancestors, we know nothing. His father, Jozef Goldszmit, was an attorney specializing in divorce cases. Jozef''s own father, Hirsh Goldszmit, was a beloved country doctor who spoke German fluently and gave his five children Christian-sounding names like Maria and Magdalena. Jozef''s wife, Cecylia Gebicka, had an artisan background; her grandfather was a glazier, a person who puts glass in windows and mirrors. The couple had two children: Henryk and his younger sister, Anna. Anna''s life and fate are a mystery to us. Though not fabulously wealthy, the Goldszmit family was quite comfortable. Thanks to Jozef''s lucrative law practice, they lived in an elegantly furnished apartment in an upscale neighborhood. Servants earned low wages, so the family could easily afford a full-time cook and maid. A French governess saw to the children''s education in a room set aside as a study, outfitted with bookcases, blackboards, and desks. Young Henryk had no friends his own age and played alone with blocks and his sister''s dolls. His snobbish mother thought other children, most of all poor children, were not good enough for her precious darling. Poor children, she insisted, were dirty and smelly, cursed, and fought like alley cats. Henryk''s refuge from boredom was the kitchen, the domain of a wise peasant woman from the countryside. She would sit him on a high stool as if he were "a human being and not a lapdog on a silk cushion." For hours, she told Polish folktales about dark forests inhabited by magicians and wizards, goblins and heroes. Her stories stirred the child''s imagination, inspiring the master storyteller who''d endear himself to generations of children.2 Henryk''s parents thought their son was too childish, too unfocused. His mother complained, "This boy has no ambition." He remembered how "my dad called me a gawk and a clod and, when he flew into a rage, even an idiot and an ass.... All I ever heard was--lazy, crybaby, idiot ... and good-for-nothing."3 When Henryk turned seven, he attended a Russian elementary school. This grim place operated on the belief that the human mind was a muscle that would grow flabby if not toughened by exercise. Exercise, or "mental gymnastics," consisted of memorization and repetition, accepting approved "truths" without questioning. When called upon, pupils were expected to recite the correct answer word for word, like robots. Believing children were "untamed," teachers used strict discipline. Students had to sit still in class, at rigid attention, for long periods. "Why should they move their heads sideways," Henryk recalled a teacher asking, "when I am in front of them?" Rule breaking brought humiliating punishment. Years later, he cringed when remembering how a classmate was beaten for a harmless prank. A janitor spread out the offender on a desk while the teacher stood over him and hit him with a switch, a slender stick used as a whip. "I was terrified. It seemed to me that when they finished with him, I would be next. I was ashamed, too, because they beat him on his bare bottom. They unbuttoned everything--in front of the whole class." The lesson: Adults did not respect children. Children were seen as tiny wheels in the great machine that was the adult world. They existed, Henryk decided, to live up to their elders'' expectations and demands, not to be themselves in the here and now.4 The Goldszmit family''s fortunes changed in the early 1890s. Normally a serious, self-controlled man, Jozef began to act oddly. He would remain silent for hours, his eyes cast down, his face tense, and would then burst out incoherently. One day, in the courtroom, he stopped questioning a witness in mid-sentence. Arms flailing, he shouted: "They''re here, they''ve come after me; go away. That''s not my witness in the box, it''s the devil come to mock me. Send him away, away." Doctors diagnosed a mental breakdown.5 I: The Old Doctor 1. Betty Jean Lifton, The King of Children: A Biography of Janusz Korczak (New York: Farrar, Straus & Giroux, 1988), 13. 2. Ibid., 15. 3. Marek Jaworski, Janusz Korczak, trans. Karol Jakubowicz (Warsaw: Interpress, 1978); 18; Janusz Korczak, The Ghetto Years: 1939-1942, ed. Yitzhak Perlis (Tel Aviv: Ghetto Fighters'' House & Hakibbutz Hameuchad Publishing House, 1980), 110. 4. George Z. F. Bereday, "Janusz Korczak: In Memory of the Hero of Polish Children''s Literature," The Polish Review 24, no. 1 (1979), 29; Lifton, The King of Children, 25. 5. Mark Bernheim, Father of the Orphans: The Story of Janusz Korczak (New York: Dutton, 1989), 18-19.