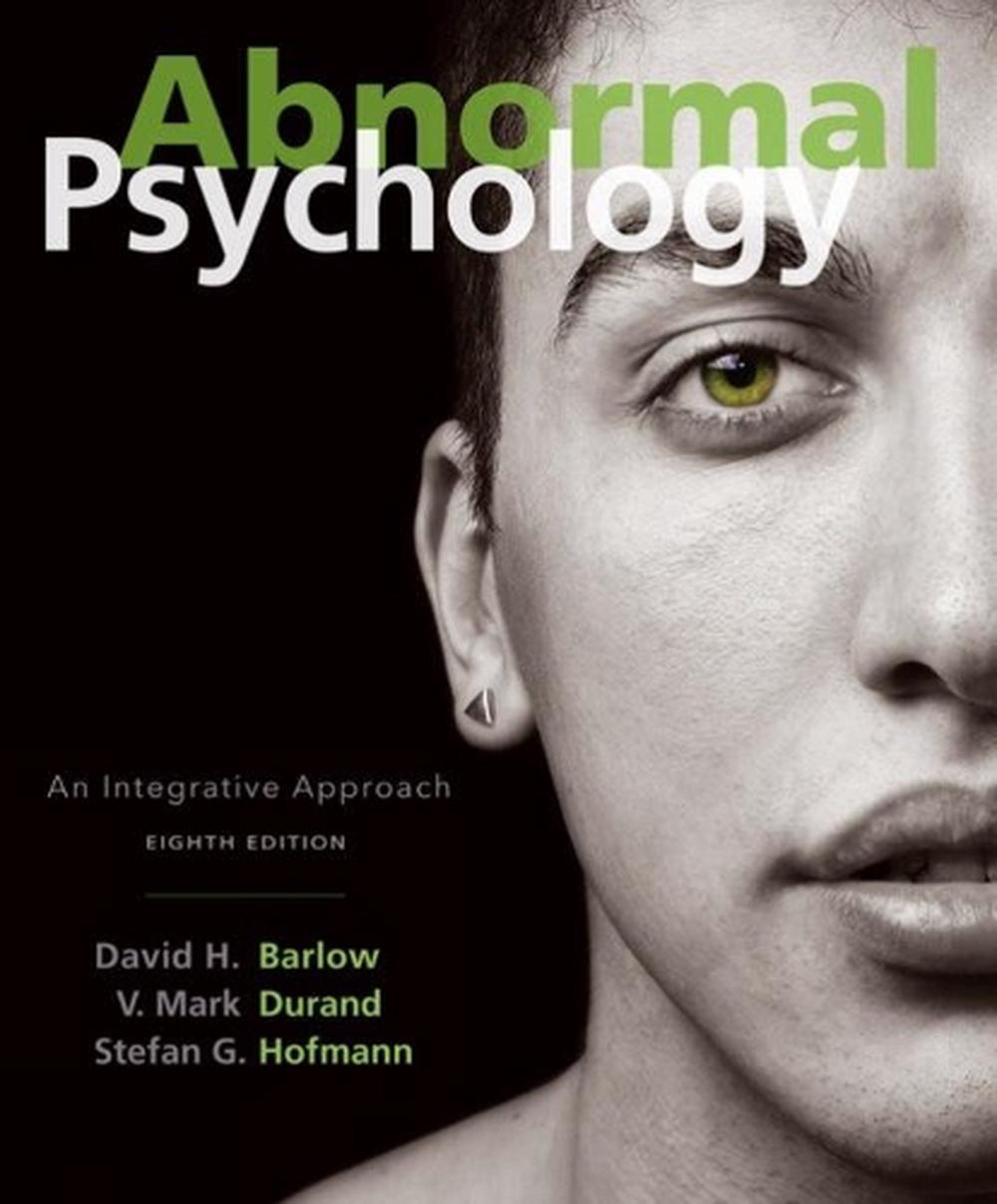 ABNORMAL PSYCHOLOGY: AN INTEGRATIVE APPROACH, Eighth Edition, is the perfect text to help you succeed in your abnormal psychology course! The authors -- all internationally recognized experts in the field -- show you how psychological disorders are rooted in multiple factors: biological, psychological, cultural, social, familial, and even political. You can test your understanding of topics with the text's built-in concept checks and chapter quizzes.

Stefan G. Hofmann is Professor of Psychology at the Department of Psychological and Brain Sciences at Boston University, where he directs the Psychotherapy and Emotion Research Laboratory. He has an actively funded research program studying various aspects of emotional disorders with a particular emphasis on anxiety disorders and cognitive behavioral therapy. He has won many prestigious professional awards, including the Aaron T. Beck Award for Significant and Enduring Contributions to the Field of Cognitive Therapy by the Academy of Cognitive Therapy. He is a fellow of the APA and APS and was president of various national and international professional societies, including the Association for Behavioral and Cognitive Therapies and the International Association for Cognitive Psychotherapy. He was also an advisor to the DSM-5 Development Process and a member of the DSM-5 Anxiety Disorder Sub-Work Group. Dr. Hofmann was recently named a Highly Cited Researcher by Thomson Reuters. He is currently editor of Cognitive Therapy and Research and has published more than 300 peer-reviewed journal articles and 15 books, including AN INTRODUCTION TO MODERN CBT (Wiley-Blackwell) and EMOTION IN THERAPY (Guilford Press). David H. Barlow is an internationally recognized expert and leader in clinical psychology, having pioneered many treatments and investigations in anxiety and mood disorders. Currently Professor Emeritus of Psychology and Psychiatry at Boston University, Dr. Barlow is also founder and Director Emeritus of the Center for Anxiety and Related Disorders, one of the largest research clinics of its kind in the world. Previously, he was Distinguished Professor at State University of New York at Albany. From 1975 to 1979, he was Professor of Psychiatry and Psychology at Brown University, where he also founded the clinical psychology internship program. From 1969 to 1975, he was Professor of Psychiatry at the University of Mississippi Medical Center, where he founded the Medical School psychology residency program. Dr. Barlow received his B.A. from the University of Notre Dame, his M.A. from Boston College, and his Ph.D. from the University of Vermont. He is the recipient of a Lifetime Achievement award from the American Psychological Association as well as the James McKeen Cattell Fellow Award from the Association for Psychological Science, which honors individuals for their lifetime of significant intellectual achievements in applied psychological research. V. Mark Durand is known worldwide as an authority in the area of autism spectrum disorders. He is a Professor of Psychology at the University of South Florida St. Petersburg, where he was the founding Dean of Arts and Sciences and Vice Chancellor for Academic Affairs. Dr. Durand is a fellow of the American Psychological Association and has received over $4 million in federal funding to study the behavior problems in children with disabilities. Previously he served in a variety of leadership positions at the University at Albany, including founder of the Center for Autism and Related Disabilities. He received his B.A., M.A., and Ph.D. (all in psychology) at the State University of New York (SUNY) Stony Brook. Dr. Durand received the University Award for Excellence in Teaching at SUNY Albany in 1991, and the Chancellor's Award for Excellence in Research and Creative Scholarship at the University of South Florida St. Petersburg in 2007. Currently a member of the Professional Advisory Board for the Autism Society of America, he is the co-editor of the Journal of Positive Behavior Interventions and has written 10 books as well as over 100 publications on functional communication, educational programming, and behavior therapy. Dr. Durand developed a unique treatment for severe behavior problems that is used worldwide. Most recently he developed an innovative approach (Optimistic Parenting) to help families work with their challenging children. He was named a 2014 Princeton Lecture Series Fellow and received the 2015 Jacobson Award for Critical Thinking from the American Psychological Association for his body of work in the field of autism spectrum disorder.