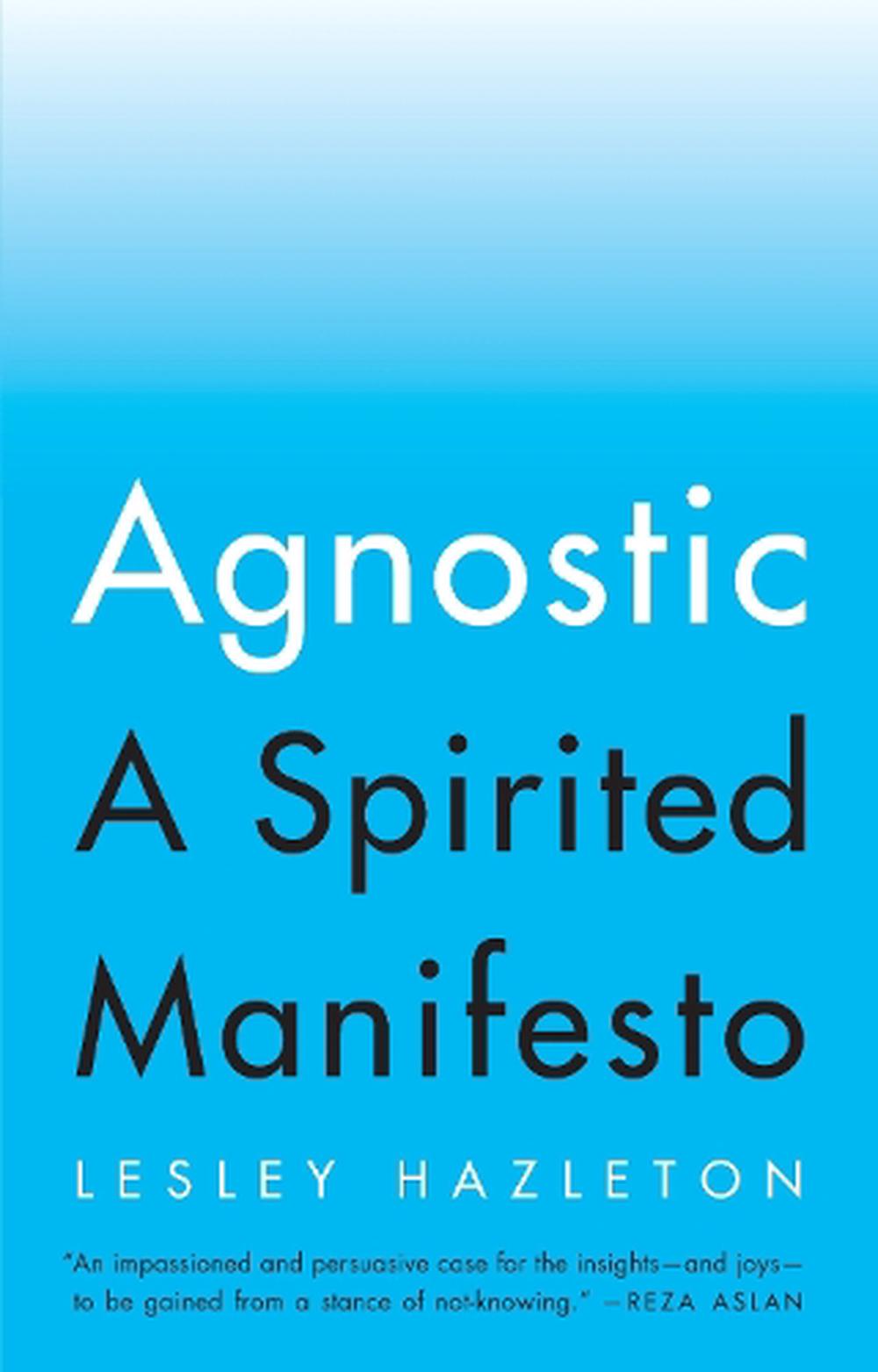 In this provocative, brilliant book, Lesley Hazleton gives voice to the case for agnosticism, breaks it free of its stereotypes as watered-down atheism or amorphous 'seeking', and celebrates it as a reasoned, revealing, and sustaining stance toward life. Stepping over the lines imposed by rigid conviction, she draws on philosophy, theology, psychology, science, and more to explore agnosticism with curiosity and passion. Inspired and inspiring, Agnostic recasts the question of belief not as a problem to be solved but as an invitation to an ongoing, open-ended adventure of the mind.

Lesley Hazleton is an award-winning writer whose work focuses on the intersection of religion, history, and politics. She reported on the Middle East from Jerusalem for more than a dozen years, and has written forTime, The New York Times, The New York Review of Books, Harper's, The Nation, and The New Republic, among others. Her book After the Prophet was a finalist for the PEN Center USA Literary Award, and she is the recipient of The Stranger's "Genius in Literature" Award. Hazleton lives in Seattle.

Praise for Agnostic "In Hazleton's vital, mischievous new book, the term [agnostic] represents a positive orientation towards life all its own, one that embraces both science and mystery, and values the immediate joys of life...In each of her wide-ranging reflections....she remains intimately grounded and engaged in our human, day-to-day life." --New York Times Book Review

"A beautiful, inquisitive, energetic 200-page tribute to uncertainty... that's about 50 times as charming as anything Sam Harris has ever written and 500 times more inspiring than any of Joel Osteen's books...You might give yourself windburn turning these pages." --Seattle Review of Books

"Provocative...[Hazleton] paddles the river of doubt with energy and exuberance." --Seattle Times

"Hazleton makes a compelling case for why agnosticism matters, and sets out a comprehensive and though-provoking definition of what it means. It's a powerful and deeply humanistic argument, told deftly through these pages." -Vol. 1 Brooklyn

"The title of Hazleton's "manifesto" on agnosticism is not a contradiction: she imbues the middle ground between belief and non-belief with spirit by showing that agnosticism itself is a disposition in favor of intellectual and emotional dexterity. A book that should be read as much by the believer (the religious or atheist) as anyone else." -- Flavorwire, "A Must Read"

"A heady romp through the mind of an intellectual adventurer who relishes curiosity and questioning over the dubious comforts of dogma and certainty." --Seattle Met

"To be agnostic is not to sidestep the question of belief, for Hazleton, or to commit to a wishy-washy moral framework. It is instead to have enough backbone to stand firm in the liminality of uncertainty. She wants readers to give agnosticism a fair shake, and many will be convinced by her appealing voice and accessible prose." --Publisher's Weekly (starred)

"Here, with clever elucidation, are artful essays that celebrate the wonder of the unknown... Hazleton does not deny possibilities; she denies only assured and implacable dogma." --Kirkus Reviews

"At last, a liberating antidote to the either/or thinking of the atheist/believer debate. Hazleton makes an impassioned and persuasive case for the insights - and joys - to be gained from a stance of not-knowing." --Reza Aslan, author of Zealot and No God but God

"It's a fraught enterprise to take on the big questions--God, meaning, mortality, existence--but Hazleton has done it here with remarkable aplomb, and in a singular voice devoid of pretension. Her manifesto is, for me, a celebration--a welcome infusion of joy in an arena preponderantly inhabited by dogmatists." --David Guterson, author of Snow Falling on Cedars

"As a rabbi whose search for religious meaning is constantly renewed by doubt, I loved Lesley Hazelton's book. It is vibrant, challenging, extremely interesting, funny and profound. It is wise in its embrace of paradox, mystery and science." --Rabbi Rachel Cowan, Former Director of the Institute for Jewish Spirituality

Praise for The First Muslim

"Richly detailed and beautifully written . . . [Hazleton] is able to do with words what is almost never attempted in pictures . . . indispensable." --The Seattle Times

"Like her subject, Hazleton brilliantly navigates 'the vast and often terrifying arena in which politics and religion intersect, ' revealing the deep humanity of faith." --More

"The First Muslim finds the human in the sacred." --The Stranger

A widely admired writer on religion celebrates agnosticism as the most vibrant, engaging-and ultimately the most honest - stance toward the mysteries of existence.

One Beyond Either/Or There are some four hundred houseboats in Seattle. Many, like mine, are little more than shacks on rafts, but this may be the only one with a mezuzah at its entrance. If I were religious, the small cylindrical amulet would hold a miniature scroll inscribed with the Shema, the Jewish equivalent of the Lord''s Prayer or the Islamic Shahada. But mine doesn''t, partly because the scroll kept falling out when I put the mezuzah up on the doorpost, and partly because I don''t believe a word of the prayer anyway. I''m not sure what happened to it. I may have thrown it out in a tough-minded moment, or it may be squirreled away at the bottom of a drawer somewhere. No matter. Most of the time I don''t even notice the mezuzah, and neither does anyone else. But I know it''s there, and that does matter. Yet why should it? I am firmly agnostic, and haven''t been to a synagogue service in years. Decades, in fact. So is the mezuzah an empty sentimental gesture on my part, or does the word hypocrisy apply? Could I be in denial: a closet theist, or a more deeply closeted atheist? Or am I just a timid fence-sitter, a spineless creature trying to have it both ways, afraid to commit herself one way or the other? And there''s the problem-right there in that phrase "one way or the other." It sees the world in binary terms: yes or no, this side or that. It insists that I can be either agnostic or Jewish but not both, even though both are integral parts of this multi-faceted life that is mine, as integral as being a writer, a psychologist, a feminist, all the many aspects of this particular person I am. All are part of the way I experience the world, and myself in it. Take any one of these aspects away, and I''d be someone else. To be agnostic is to love this kind of paradox. Not to skirt it, nor merely to tolerate it, but to actively revel in it. The agnostic stance defies artificial straight lines such as that drawn between belief and unbelief, and shakes off the insistence that it come down on one side or the other. It is free-spirited, thoughtful, and independent-minded-not at all the wishy-washy I-don''t-knowness that atheists often accuse it of being. In fact the mocking tone of such accusations reveals the limitations of dogmatic atheism. There''s a bullying aspect to it, a kind of schoolyard taunting of agnostics as "lacking the courage of their convictions"-a phrase that raises the question of what exactly conviction has to do with courage. It''s easy to forget that the inability to muster the honesty of the three words "I don''t know" only leads to a radical dishonesty. The least we have come to expect is that someone be able to bullshit their way out of not knowing something, which is why the first thing taught in media training (a term that always makes me think of obedience training for dogs) is how to evade a difficult question and maintain the tattered illusion of mastery. I stand tall in my agnosticism, because the essence of it is not merely not-knowing, but something far more challenging and infinitely more intriguing: the magnificent oxymoron inherent in the concept of unknowability. This is the acknowledgment that not everything may be knowable, and that not all questions have definitive answers-certainly not ones as crudely put as the existence or non-existence of God. At its best, however, agnosticism goes further: it takes a spirited delight in not knowing. And this delight is no boorish disdain for knowledge and intellect. Rather, it''s a recognition that we need room for mystery, for the imagination, for things sensed but not proven, intuited but not defined-room in which to explore and entertain possibilities instead of heading straight for a safe seat at one end or the other of a falsely created spectrum. What''s been missing is a strong, sophisticated agnosticism that does not simply avoid thinking about the issues, nor sit back with a helpless shrug, but actively explores the paradoxes and possibilities inherent in the vast and varied universe of faith-belief-meaning-mystery-existence. That''s my purpose here. I want to explore unanswerable questions with an open mind instead of approaching them with dismissive derision or with the solemn piety of timid steps and bowed head-to get beyond old, worn-out categories and establish an agnostic stance of intellectual and emotional integrity, fully engaged with this strange yet absorbing business of existence in the world. I have been agnostic for almost as long as I can remember. The only Jew in an English convent school, I grew up with competing claims on what was presumably my soul, reciting one grace-before-meals in the convent and another at home, and wishing I had to do neither. The school chapel was redolent with the smell of stale incense, the local Orthodox synagogue with the equally stale scent of Chanel No. 5 on the fox stole of my mother