Children of the Alley

PUBLISHED: 14th October 1996
ISBN: 9780385264730
ANNOTATION:
In one of the most important novels of his long and illustrious career, Nobel Prize winner Naguib Mahfouz tells the story of a delightful Egyptian family, but also reveals a second, hidden, and daring narrative: the spiritual history of mankind. "An ambitious fable that attempts to embrace within it pages not merely the world of the Middle East but that of the world itself".—The Washington Post Book World. 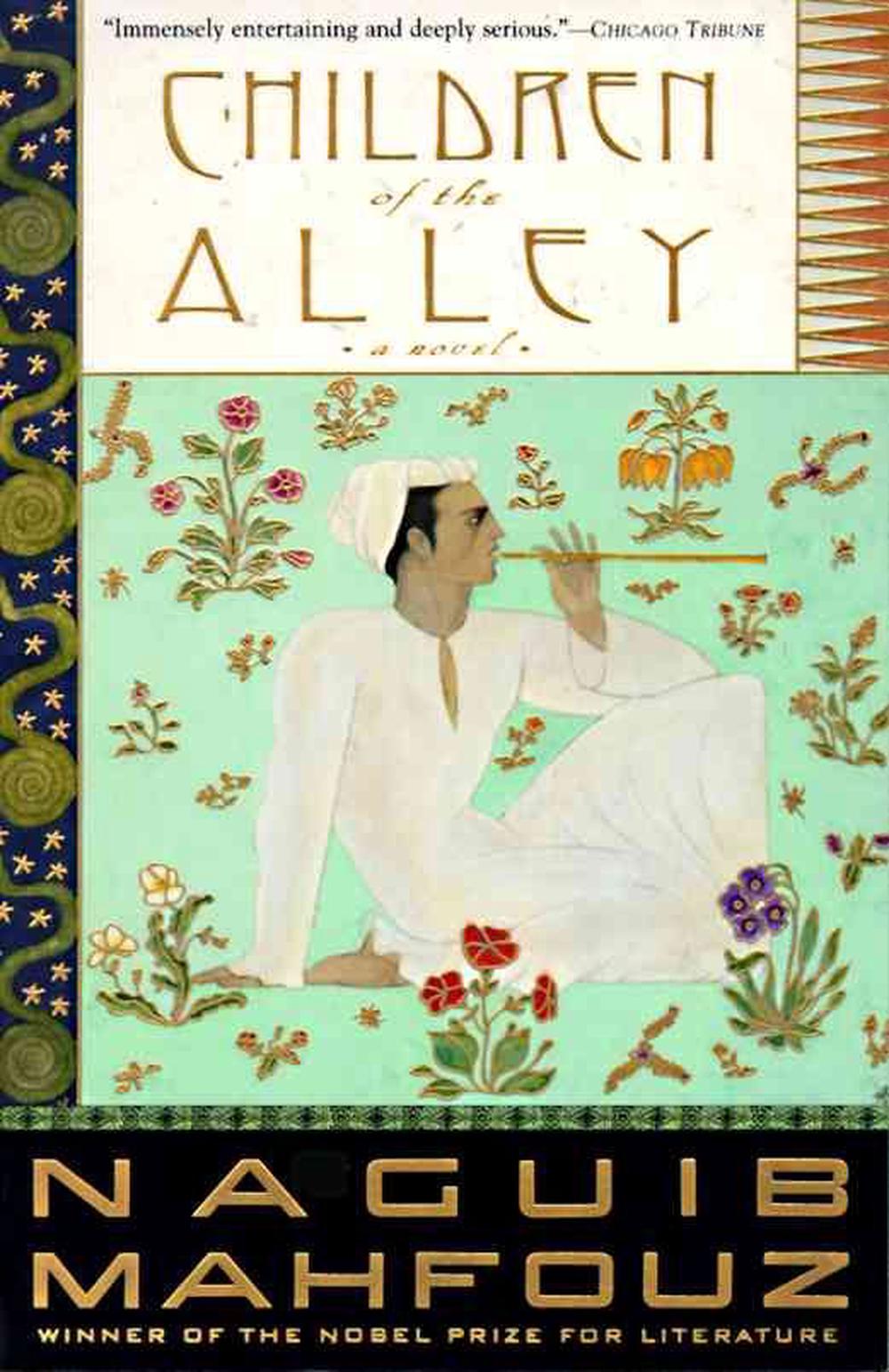 OTHER FORMATS:
PUBLISHED: 14th October 1996
ISBN: 9780385264730
ANNOTATION:
In one of the most important novels of his long and illustrious career, Nobel Prize winner Naguib Mahfouz tells the story of a delightful Egyptian family, but also reveals a second, hidden, and daring narrative: the spiritual history of mankind. "An ambitious fable that attempts to embrace within it pages not merely the world of the Middle East but that of the world itself".—The Washington Post Book World.

In one of the most important novels of his long and illustrious career, Nobel Prize winner Naguib Mahfouz tells the story of a delightful Egyptian family, but also reveals a second, hidden, and daring narrative: the spiritual history of mankind. "An ambitious fable that attempts to embrace within it pages not merely the world of the Middle East but that of the world itself".—The Washington Post Book World.

The tumultuous alley of this rich and intricate novel (first published in Arabic in 1959) is inhabited by a delightful Egyptian family, but is also the setting for a second, hidden, and more daring narrative: the spiritual history of humankind. The men and women of a modern Cairo neighborood unwittingly reenact the lives of their holy ancestors: from the feudal lord who disowns one son for diabolical pride and puts another to the test, to the savior of a succeeding generation who frees his people from bondage. This powerful novel confirms again the richness and variety of Mahfouz's storytelling and his status as "the single most important writer in modern Arabic literature" (Newsweek).

From photos and videos to apps, e-books, and more -- you've got the magic touch with iPad! So you're ready to take on technology and start enjoying all that the incredible iPad has to offer. For Dummies is here to lead the way. Whether it's walking you through setup, checking your e-mail, surfing the web, sharing your favorite photos, or having some fun with apps, this book will get you up to speed in no time. Befriend your iPad -- learn to navigate the multitouch screen and get familiar with all the built-in apps Keep in touch -- e-mail, send instant messages, and use FaceTime to video chat with your friends and family Say it with pictures -- discover how to use the iSight camera and HD video camera to capture your memories and share them online Make time to play -- read newspapers and books, watch movies and TV shows on the go, and challenge yourself with a new game Stay on track -- add appointments to your calendar, set reminders for important events, and even keep your grocery list handy Open the book and find: How to choose the right iPad for you Tips for making your screen easier to read Steps for getting connected and browsing the web How to get from here to there with Maps Help downloading e-books, music, apps, and more Ways to write e-mail, create texts, and add notes using only your voice What iCloud is and how it can help you Learn to: Browse the web, exchange e-mails, and make FaceTime video calls Take fantastic photos and HD videos and share them with family and friends Fill your iPad with e-books, music, games, apps, movies, and more

NAGUIB MAHFOUZ was born in 1911 in the crowded Cairo district of Gamaliya. He studied philosophy at Cairo University, then worked in various government ministries until his retirement in 1971. His first three published novels were Khufu's Wisdom (1939), Rhadopis of Nubia (1943), and Thebes at War (1944), all of which are set in ancient Egypt. These political and philosophical critiques disguised as historical romances show the unmistakable signs of a burgeoning literary genius. He went on to write more than 35 other novel-length works, plus hundreds of short stories and numerous cinema plots a

"An ambitious fable that attempts to embrace within its pages not merely the world of the Middle East but that of the world itself." --Washington Post Book World

"Immensely entertaining and deeply serious." -- Chicago Tribune "An ambitious fable that attempts to embrace within its pages not merely the world of the Middle East but that of the world itself." -- Washington Post Book World "A powerful allegory of human suffering and striving." -- New York Times "A remakable literary feat." -- Dallas Morning News

There are nineteen works of fiction currently available in paperback from Anchor. Because of the many universal themes of Mahfouz's work, and the variety of titles from which one can choose, this guide has been designed to provide you with questions that can apply to any or all of the books by Mahfouz which you choose to read. The questions offer new perspectives and context for your conversations. Although each of Mahfouz's novels is a unique reading experience, in an effort to guide you in making a selection, it is suggested that you might particularly be interested in one of the four following titles, each of which represents a different decade of his career: Palace Walk (1956), Midaq Alley (1966), The Harafish (1977), and The Journey of Ibn Fattouma (1983). For your convenience, a complete listing is included in this guide.

1) How would you identify the novel you are reading in terms of style and genre? What does it have in common with Western literature you have read? What about it appears to be particularly "Middle Eastern"? 2) What did you find familiar in Mahfouz''s stories? What parallels can you find in your own culture or experience to the life in Egypt he describes? 3) What elements of this novel are unfamiliar/alien to you? Do these merely reflect cultural differences or do they also address larger, more universal themes? 4) It has been suggested by many writers that there is a great contrast between the men and the women in Mahfouz''s novels; that the men are weaker and more flawed than the women, who are strong and dependable. Does this appear to be true in the novel(s) you have read? How would you characterize the women in Mahfouz''s fiction? 5) Mahfouz once said "If I had traveled, like Hemingway, I''m sure that my work would have been different. My work was shaped by being so Egyptian." Focusing on the particular works you have read, in what ways do you imagine the tone of the narrative and the perspective might change had the text been written by a more "worldly" author? 6) How does Mahfouz''s literary rendering of Egypt affect your political perception of the country? Does it alter any preconceptions you may have brought to the work for better or for worse? 7) In his acceptance speech for the Nobel Prize for Literature in 1988, Mahfouz stated: "Man remembers what hurts more than what pleases." In what ways is this dictum borne out in his writings? 8) Many of Mahfouz''s characters are derived from the lower and middle class strata of society. Yet he chooses to imbue all of his characters with a language that is considered to be classical literary Arabic as opposed to the colloquial dialects that would be more natural to their stations in life. Why do you think he does this? What effect does he achieve through the employment of this universal tongue? 9) When Mahfouz was awarded the Nobel Prize, many Arab and Egyptian intellectuals responded with mixed feelings. While on the one hand they were both pleased and proud that one of their own had achieved such recognition, on the other they wanted the world cautioned that his political views were not necessarily representative of the average Egyptian. What examples do you find in his writing that lead you to believe that there is a more "Western" sensibility at work here? 10) From 1949 to 1957, the books that Mahfouz produced were semi-autobiographical works of social realism. From 1961 to 1967, his output changed, with the pieces becoming existential and concerned with souls in a state of spiritual crisis. Since then, his approach has been eclectic. Consulting the publication chronology provided at the back of this guide, locate the period in which the book you have read came out, and discuss what elements there are in the writing style that identify it as belonging to that particular genre. 11) The novels, while possessing a timeless quality, are very much informed by a sense of place. Can you picture the events depicted here or the sensations of the characters occurring in our own society at any given point in our history? If so, when? 12) The Koran instills the belief and deference to one God. Often, the characters will refer to the "work of God" or view their fortunes as being "in God''s hands." Discuss the theme of fate vs. personal determination that runs throughout the novels. How do religious beliefs protect and hinder us? How do they affect our ability to act? 13) With our Western ideology, we would view the lives of many of these women depicted as being little better than that of prisoners. But what does Mahfouz-- with the advantage of his Egyptian heritage-- think of their lives? Do you imagine that he shares our opinion that they are repressed, or do you think that he finds their existence satisfying and as it should be? 14) Discuss the role of women''s complicity in their own repression-- both in Cairene society and in our own-- as typified by classic examples in the text of blaming the victim. 15) Like all societies, this one has superstitions that are specific to it. Identifying them, discuss the negative and positive functions that these superstitions serve for Cairene society. 16) The narratives are almost completely serious in tone, with occasional pinpoints of humor brightening the way. Discuss the techniques employed by the author to inject humor into the tales, and your opinion as to whether or not he is successful. 17) Can we-- hampered by our Western vision-- appreciate the inherent beauty of a culture so different from our own, or does our perception of the wrongness of human oppression blind us to this? 18) Usually, the author refers to his characters by name. But, now and again-- particularly during more dramatic moments-- he will refer to them as "the man" or "the woman." What effect do you suppose that Mahfouz is trying to achieve through his fashioning of this style? 19) In 1919, Egypt experienced a brief period of rebellion against the British colonial rule. In 1952, there was a revolution. Situating the piece you have read against this historical backdrop, how does Mahfouz''s writing speak to you about a nation experiencing internal unrest before, during, and after these periods of turmoil?