The Art Of American Whiskey 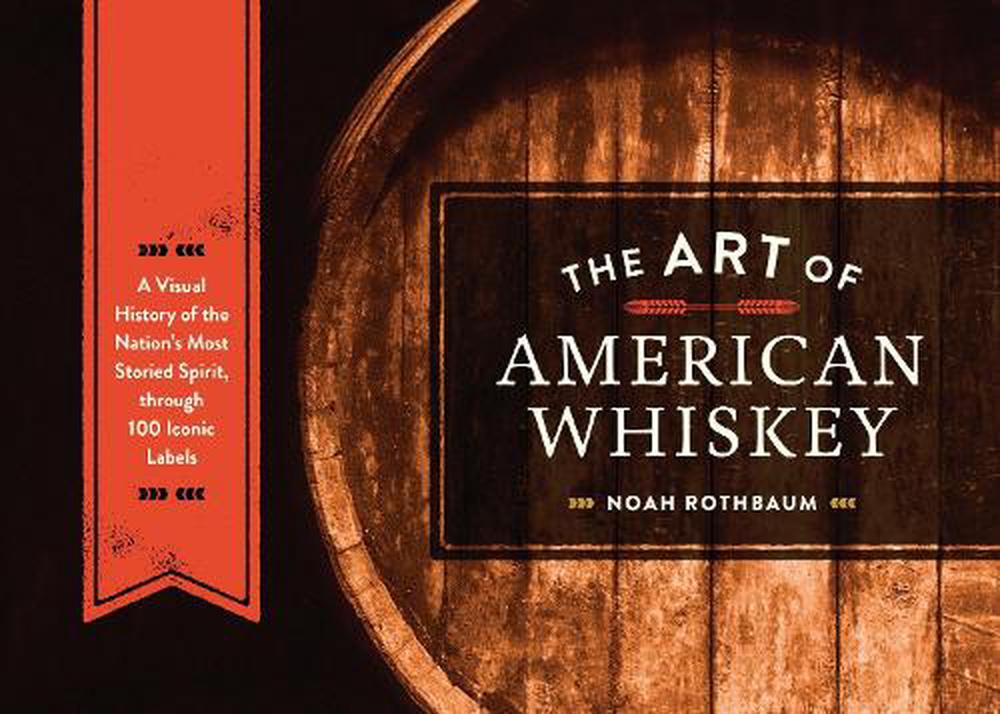 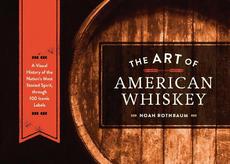 Just as wine is to the French or beer is to the Germans, whiskey--especially bourbon and rye--is an integral part of the history and culture of the United States. The Art of American Whiskey traces the arc of this beloved, renowned spirit--from its earliest days in the Colonial era, through the Civil War, Prohibition, Great Depression, and up to the current craft-distilling boom. Illustrated with 100 full-color modern and historic labels from the most iconic bottles ever made, The Art of American Whiskey is an instant collectible and a fantastic gift for any whiskey enthusiast or design lover. Captions, sidebars, profiles and short histories tell the story of the pioneers and places behind the labels, and each chapter features era-appropriate recipes from all-star bartenders and cocktail experts that will tickle any tippler's fancy.

NOAH ROTHBAUM is the former editor-in-chief of Liquor.com. He is also the author of The Business of Spirits- How Savvy Marketers, Innovative Distillers, and Entrepreneurs Changed How We Drink. He has spoken at Tales of the Cocktail, the Boston Cocktail Summit, and the National Restaurant Association Show, and has guest-lectured at the Culinary Institute of America, Georgetown University's McDonough School of Business, and Lehigh University. In addition, he has written for the New York Times, the Wall Street Journal, Food & Wine, Food Network Magazine, Gastronomica, Esquire, Details, Men's Journal, Men's Fitness, Life, NYMag.com, TheAtlantic.com, and Portfolio.com.

Introduction The late 1800s and early 1900s Prohibition Life after Temperance G.I. Joe and the Man in the Gray Flannel Suit The Swinging Sixties The Seventies, Eighties, and Nineties, aka the Dark Ages The New Golden Age Acknowledgments Photo and Illustration Credits Bibliography Index

"This splendid introduction to American whiskey, told through its iconography and period cocktails, sure whets the appetite for a glass of the real thing!" --Charles MacLean, author of World Whiskey "As an immigrant to the United States, I knew little about American history until I started to research bourbon back in the 1990s. Reading The Art of American Whiskey was like taking a graduate course. Pour yourself two fingers of whiskey, then pore over this fascinating and incredibly beautiful book--it's a grand way to relax." --Gary "gaz" Regan, author of The Negroni and coauthor of The Book of Bourbon and Other Fine American Whiskeys

"The Prohibition Era left a gap in America's knowledge of whiskey, leading to a slew of myths and misconceptions. Whiskey and spirits enthusiast Noah Rothbaum debunks some of these myths in his new book, "The Art of American Whiskey," which uses 100 vintage and modern labels to help tell the story of whiskey in America." --Brittany Fowler, Business Insider

"Flip through, drink up and soak in a unique, visually delightful take on a distinctly American art form." --Kat Kinsman, Tasting Table

"Many a book, blog and news article has been devoted to the topic of whiskey: the way it's aged, where to drink it, how to store it and serve it or pair it with food. But comparatively little attention has been paid to how whiskey is packaged. Which is a shame, really, when you think about how a beautiful, funny or fancy-looking label can influence which bottles we buy -- and which we ignore -- when shopping the whiskey aisle. Spirits and wine writer Noah Rothbaum felt that it was time that American whiskey labels had their day in the spotlight. His new book, The Art of American Whiskey, traces the history of surprisingly elaborate labels from the 1800s to today." --Tove Danovich, NPR

"Noah Rothbaum follows the endearing history of how the great whiskey peddlers of America enticed us to try their products in the first place. Natural scenes, patriotism, frontier heroes, folkloric heroes, medicinal claims: very little was off limits for marketers looking to hawk their hooch. But this book isn't limited to commercial imagery. It's also a valuable history of the country as a whole--not to mention that it includes some pretty good cocktail recipes. " --Jack Bettridge, Cigar Aficionado

"This splendid introduction to American whiskey, told through its iconography and period cocktails, sure whets the appetite for a glass of the real thing!"

A visual history of American whiskey, as told through hundreds of whiskey bottle labels, from early, pre-Prohibition-era days to the present.

Ask just about any drinker--or nondrinker, for that matter--to identify a bottle of Jack Daniel''s Tennessee Whiskey on a liquor store shelf. The odds are pretty good that he or she will easily be able to pick out the company''s distinctive rectangular bottle and signature black-and-white label--branding that is arguably as familiar as Pepsi''s blue-and-red globe, Budweiser''s old-timey Gothic lettering, and the Anheuser-Busch seal. American whiskey is currently having an unprecedented revival: according to the Distilled Spirits Council of the United States (DISCUS), sales of bourbon, Tennessee, rye, and corn whiskey were up nearly 37 percent between 2000 and 2013. Yet when it comes to the subject of American whiskey packaging and design--the beauty and artistry of its labels, for example--very little has been written or said. Much of the talk, rightly so, has focused on what is in the bottle, and brands have gone to great lengths to highlight their heritage, quality of ingredients, and distilling practices. But there is an equally rich tradition of creating unique and eye-catching branding, which, in my opinion, deserves as much attention and appreciation as any vintage French cognac advertising poster, colorful cigar band, or modern wine label. When a distillery introduces a new bourbon or rye, ample time goes into the planning of its look and branding strategy. (For example, the label for Jim Beam''s Jacob''s Ghost White Whiskey not only went through multiple iterations but also required an entirely new printing process to make the oval portrait of the company''s founder look right.) If things go well, every store and watering hole will stock the spirit, and its trademark will enter the pantheon of household names, joining all-stars like Wild Turkey, Maker''s Mark, and nonliquor standouts like Kleenex and Coca-Cola. The same was true of the American whiskey market one hundred years ago: it was highly competitive and driven by catchy brand names and memorable label art. While some whiskies from that era survived and still exist today--including Jim Beam, Early Times, the aforementioned Jack Daniel''s, and arguably the oldest (and aptly named) Old Overholt, which dates back to 1810--there were also scores of other whiskey brands, big and small, that disappeared over the years. Many of them were driven out of business by Prohibition and the two world wars. Others were victims of corporate mergers and changing tastes. Historically, it was common for larger distillers to have regional whiskey lines with strong local followings. The same bourbon or rye might have been sold in ten different markets under ten different names. Thanks to the consolidation of producers and distributors, as well as cable, network television, and the Internet''s power to shrink the planet, distillers these days focus on building national or international brands. As a result, many of these local brand names have been retired. Today, the major spirits companies own the intellectual property rights to dozens of dormant whiskies. Every so often, one of these ancient brands is dusted off and resuscitated, like E. H. Taylor, which was reintroduced in 2011, becoming a name once again familiar among drinkers and bartenders. These trademarks are valuable and are often bought or traded by liquor companies. (Sometimes, to keep the rights from expiring, just a single case of alcohol is produced and sold in a sleepy market where it won''t get much attention.) As a whiskey drinker, I long to taste these so-called ghost spirits, which have been off the market for years. (I am not alone--there is an increasingly lucrative market for buying and selling vintage American whiskies, online and at auction.) For reasons of scarcity and finances, my dream will no doubt stay just that; however, I have been able to track down some of the historic labels from these long-lost brands. They are thrilling to behold on their own, and I admit to fantasizing about their flavor profiles and pulling together imaginary tasting notes for each one of them. Most of the art is done in a style that combines regional and folksy iconography with classic industrial design. The spirits companies usually created the art in-house or used local designers. These amazingly colorful and charming labels are often the last links we have to the pioneers of the whiskey industry and are a piece of American history. Many of these whiskies and their accompanying logos have floated down to us on a grand river of alcohol, passed from one liquor company''s portfolio to another. In the process, they tend to lose much of their history and even geographical ties. (For instance, before Prohibition, the mid-Atlantic states were famous for rye whiskey, but those brands either went out business or, like Rittenhouse Rye and Michter''s, are now based in Kentucky.) But despite their circuitous paths, they have managed to retain their beauty and capture a real moment in time. For this book I have chosen labels from brands that are long gone, like O. F. C. and Belle of Lincoln, and also ones from brands that are still with us, like Pappy Van Winkle and Four Roses, as well as new additions to the market. They represent the major periods of American-whiskey history--from its golden age, through Prohibition, and up to the modern craft-distilling boom--and are also a survey of American industrial design. This collection is, of course, the perfect accompaniment to a dram of your favorite whiskey. Cheers!